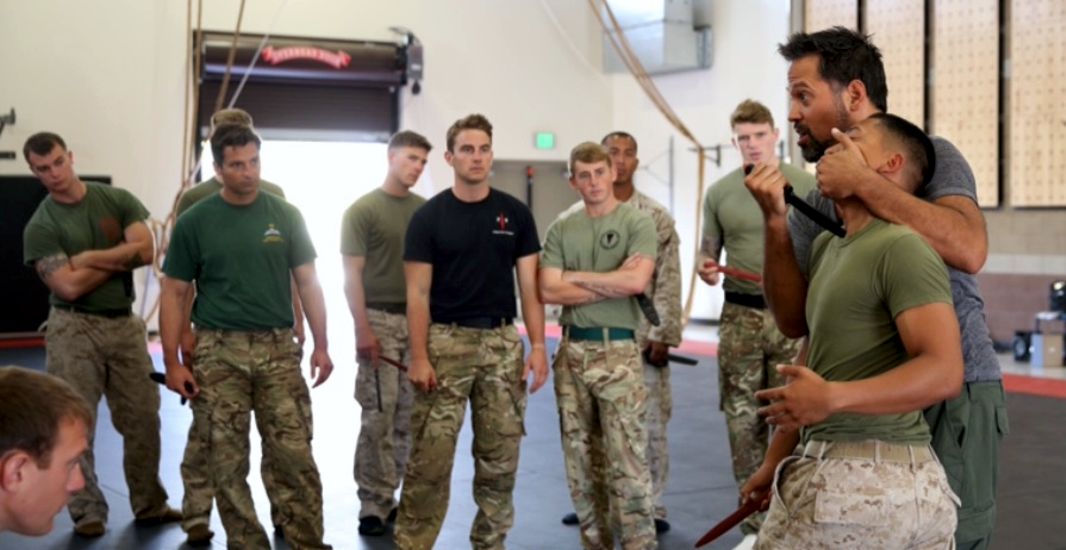 It was a hot summer in 1995 when I had my very first experience with martial arts. My instructor turned my entire perception about fighting on its head. I grew up in Milwaukee, Wisconsin, experiencing difficult lessons on the street from the “school of hard knocks.”

I was no stranger to violence. The kids I was associating with in Milwaukee had a habit of engaging in confrontations and I found myself the one attempting to help solve the problems. I had a chip on my shoulder and a relentless desire to prove to myself that I could handle violent situations when they happened.

My instructors at this time were Kempo teachers. The only reference I had with physical confrontation was watching people get knocked out on the street. Naturally, I gravitated to the art that refined the practitioner’s ability to throw multiple striking combinations to many targets. I really had no concept of the depths of knowledge that surrounded Kempo Karate.

One day in the dojo I demonstrated my “street ability” and poor judgment to my master instructor, who responded in kind. He hit me so hard that I landed upside down after going through two layers of drywall. Obviously this experience left me wondering what had happened. My whole world was shattered. My perception of my abilities, and the ego attached to those abilities disintegrated. Thank goodness!

This was my first experience with a proper teacher that wasn’t teaching watered down martial arts. Behind every block, strike, movement, and breath, there was an explanation. These weren’t outdated dance movements that made no sense. They were no-nonsense principles of kinesiology and kinematics that drastically increased the effectiveness of the movements.

There was no secrecy from my teachers. They were willing to provide all the answers, and they went on to explain that the movements I was learning were also subject to individual circumstances and scenarios.

They explained that a real life situation will never be exactly the same as training in the dojo and that a good instructor will show the difference between the lesson, or controlled environment, and dynamic stress training.

These instructors introduced me to the importance of developing sets of attributes and movements that would become spontaneous during duress and this dynamic training prepared us for a true fight.

I was taught to look for percentages of success during dynamic training sessions. During these sessions, my instructors would point out which techniques I was repeating too often, thus exposing the techniques (templates) I needed to work on to “add to my game.”

This learning curve created a baseline for me to evaluate my weaknesses in any given scenario. It was a scientific approach to improvement and training. These learning principles stuck with me over the course of a lifetime of training.

In modern times, there are many motives for an individual to study martial arts. Not everyone is looking to be a competitor, a tough guy, or had something to prove, like I did. Some parents are enrolling their young children in martial arts schools in order to help them build a solid foundation of strong moral attitudes and codes of conduct that will help them treat other people with respect and help them tackle adversity.

There are other practitioners that use martial arts as a vehicle for rehabilitation and health. It is common to see older individuals who have serious injuries taking part in martial arts classes to strengthen areas of the body that need rehabilitation. They also sweat while increasing their daily activity. I had to do this in order to rehabilitate my shoulder after surgery.

Many students enroll in martial arts classes to learn self-defense. These students are looking to build self-confidence and to learn life-savings skills.

As we can see, there are many different reasons for choosing to study martial arts and this presents the danger of learning a watered down martial arts system? So, how do we evaluate what is a good system of martial arts to study?

The dangers of learning watered down martial arts are simple. Your techniques won’t work when you need them to. The movements will distract, and detract, and your ability to save your life or the lives of loved ones will be diminished. Prospective students need to evaluate their motivations for wanting to train in the martial arts. Is it for health, or for self-defense and martial application? Is it an activity for your kids? Is it for the community and social networking? Is it to increase your overall health, flexibility, strength, and confidence? Or is it because you want it to work when you need it? If the latter is the answer, then you need to be very careful about choosing the system and instructor.

Choosing a martial arts system for self-defense is difficult, and more complicated than one might think. For example, many people say that the art of Brazilian Jiu-jitsu is the most realistic arts to study for street fights. Yet, if you introduce multiple attackers or edged weapons into the scenario, you will realize that what you learn in BJJ is not enough to keep you safe.

I have seen men trust in boxing as their “go to” for self-defense. In this modern age of UFC style fighting, we also see a huge increase in American and Thai kickboxing. Boxing and kickboxing, whatever the style or format, are reliable ways for a practitioner to learn to strike and kick effectively and these arts are proven to do so.

However, these skills alone will leave these practitioners at an extreme disadvantage against a grappling man who does Judo, wrestling, or Brazilian Jiu-Jitsu.

If we look at active duty and military personnel, we see that the only reason they engaged in a hand to hand confrontation is because the enemy combatant has gotten past their primary weapon (a rifle), their secondary weapon (a sidearm), and their edged weapon. Their only objective is to regain control of the situation and kill the enemy combatant.

In this case, virtually any of the competitive or sport applications of the martial arts are useless. A Marine in combat wants to get to his weapon as fast as possible to kill the enemy combatant before being killed. There are no points to be earned or tapouts due to arm bars, rear naked chokes, or anything else.

There is plenty of information out there for evaluation so it comes down to the individual practitioner’s willingness to research the different arts and different instructors. The instructor, and system in question, should be vetted to make sure that they are part of a legitimate lineage in that particular style, and that they possess the necessary, tested, physical experience in their field, to make them an expert at what they do.

It does no good to study from a combatives expert who hasn’t been in combat or worked with those who have. It won’t much to learn kickboxing or Muay Thai from instructors who have never sparred or gotten into the ring. The same can also be said of Brazilian Jiujitsu. Has your instructor had any competition experience? If they haven’t, are they studying techniques from someone who has?

The concept of learning a watered down system is a very real concern. There are many Karate, Kenpo, Tae Kwon Do, and Kung Fu schools that are teaching the correct techniques to their students, but have little to no knowledge of how to actually integrate the techniques, or how to generate force through the use of these techniques to get the devastating effect necessary. Often times these techniques simply become dance moves.

There are many Brazilian Jiujitsu schools that teach the positions, transitions, and submissions of the grappling game, but they are not covering a lot of the hidden nuances of body framing, correct weight projection, timing, and leverage that make the art such an effective machine for victory on the street. These schools are setting up their students for failure or worse the moment they get into a serious situation.

There are many instructors in weapons based systems such as Kali, Escrima, Arnis, and Krabi Krabong, who are very concerned with acquiring their next set of drills while missing out on the the reason those drills are so important in a bladed system of self-defense.

These attribute based drills become the focus of the training, versus the realization that these drills are simply a vehicle to learning. I have seen many instructor’s of various systems fold under pressure when training on base with Marines, because they are training in an uncontrolled environment. These are examples of watered down martial art systems and must be kept in mind when researching your choice of a martial arts system and instructor.

To sum it up, you have to know what your motivation is for getting involved in martial arts training. Chances are, there is a specific style, and instructor, who specializes in what you are looking for and will be happy to accommodate you. You should also realize that your motivations may change over time, and there is nothing wrong with changing direction in regards to the style or teacher you need to accommodate those changes.

Always do your research on the system, and especially the instructor. Don’t be afraid to ask the “why” about a certain movement or set of drills. This is your training, no one else’s; if you’re not getting the answers to the questions you are asking, you should go to a school where you do. Search for teachers who aren’t afraid of saying, “I don’t know that.” And make sure to hold on to the teachers that are willing to say, “Let me introduce you to a guy I know who can answer that.”

The Over Sexualization of Martial Arts

Jesalyn Mae Harper - November 13, 2018
We use cookies to ensure that we give you the best experience on our website. If you continue to use this site we will assume that you are happy with it.OkRead more