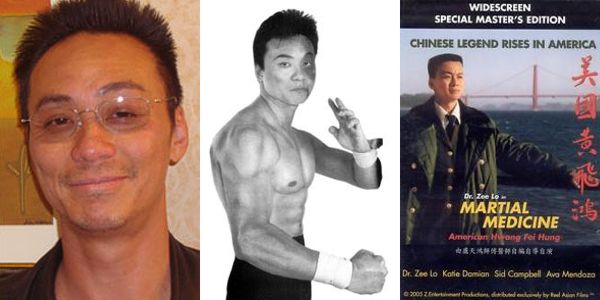 Born and raised in China, Dr. Zee Lo started his martial arts training with his grandfather at the age of 5. As a teenager, he grew up practicing Tai Chi Chuan, Wing Chun, Choy Li Fat, and Northern Shaolin and Western Boxing. After coming to America for college in the early 80’s, Dr. Zee Lo started his JKD training with Sifu Dan Inosanto and Sifu Ted Wong and was a formal classmate of the late Brandon Lee. He has also fought full-contact bouts professionally out of the Jet Center.

After 3 decades of training, Dr. Zee Lo continues to share his knowledge in the martial arts and medicine. He has been the personal doctor of Master Eric Lee, Professor Toru Tanaka, Grand Master Sin Kwan Thé, and Grand Master Sid Campbell and legendary American Kenpo pioneer Great Grandmaster Ed Parker. He has acted and choreographed in a number of Hollywood action/martial arts films and has taught and medically treated numerous Hollywood stars and celebrities.

As a producer he has created several popular educational/informational programs for public TV. His Hit Medicine show focuses on medicine practices that are both holistic and traditional in Chinese culture. Each week he hosts this enlightening alternative show to educate and inform the general public about ways that other countries deal with malady and physical disabilities. Acupuncture, herbs, proper dietary regimens and physically oriented sports and martial arts factor in his treatments and advice.

Sifu Zee Lo also hosts the very popular Channel 26 Pacifica Community Television program that focuses on exciting people that are on the cutting edge with their creativity and artistic endeavors.

As a motion picture actor he wrote, produced and acted in several films that are presently being readied for distribution.

The Life Exploits of Vincente Carin