In Advanced Brazilian Jiu-Jitsu, Marcelo Garcia, considered by many to be the best pound-for-pound Brazilian jiu-jitsu fighter in the world and the man that has proven time and again that his unique style of grappling is one of the most effective forms of Brazilian jiu-jitsu in existence, unveils the system of techniques that allowed him to conquer the world of BJJ. As a five-time BJJ World Champion and a four-time ADCC Submission Grappling World Champion, Marcelo has shown that his style of fighting translates to both gi and no-gi competitions, making his system a must for all who train in the grappling arts. 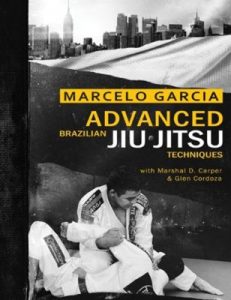 Through detailed narrative and more than 2,000 step-by-step color photographs, Marcelo breaks down the arm drag, methods for taking and sustaining back control, finishes from the back, and a plethora of takedowns and guard passes. Leaving no stone unturned, he also sheds new light on the guillotine choke and omoplata submissions.

To avoid watering down the pages with redundant transitions and submissions that are well known and widely taught in jiu-jitsu schools across the globe, Marcelo only covers the techniques that are unique to his system. Unlike a lot of jiu-jitsu systems, which include techniques that are limited in range and application, each submission covered in this technical manual is practical and guaranteed to work on opponents both large and small. Having competed in the Absolute Open Weight Division his entire life, Marcelo discarded the techniques that didnÆt work on larger, stronger opponents. What you are left with is a highly effective and efficient system of grappling that works for and on everyone. Let Advanced Brazilian Jiu-Jitsu elevate your grappling game to the next level.

About the Authors
Marcelo Garciais a five-time Brazilian Jiu-Jitsu World Champion and a four-time ADCC Submission Wrestling World Champion. He has competed and taught jiu-jitsu all over the world.

Marshal Carper trains in Brazilian Jiu-Jitsu under Pedro Sauer and black belt Sonny Achille along with writing about fighting. Carter has been published in Ultimate MMA Magazine, Fight! Magazine and the Escapist.

Glen Cordoza is a New York Times and Wall Street Journal Best Selling author, and a former professional mixed martial artist and Muay Thai boxer. He is one of the most published authors on the topics of MMA, Brazilian Jiu-Jitsu, Muay Thai, and fitness with twenty books to his credit.