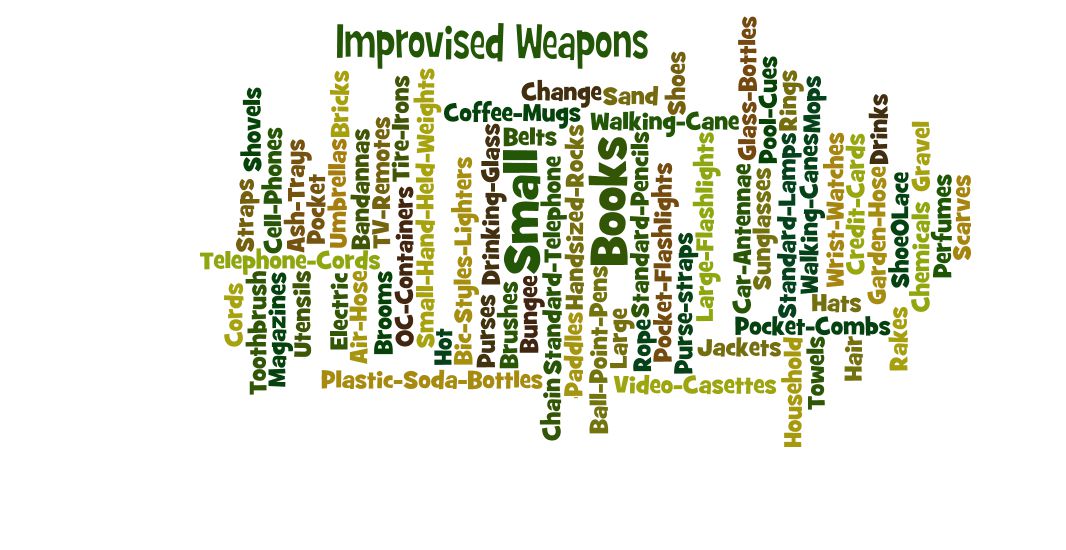 The term “improvised weapons” is pretty common among hardcore martial arts and self-defense practitioners, but is often misunderstood by the general public. Some people seem to think that the term is used to refer to various home-made guns, bombs, booby-traps. Others seem to think that it refers to home-made stabbing or cutting weapons often found behind prison walls. The fact is, there is a difference between those items mentioned and actual “improvised weapons”. I hope to clear up some misconceptions and misunderstanding in this article.

First, allow me to attempt to explain those misunderstood terms.

“Improvised weapons” is a term used to represent common everyday objects that can be used is a variety of defensive applications. These objects are not physically altered in any way, in an effort to make them more functional as weapons. They are generally utilized in their normal state. Improvised Weapons can include items such as ball-point pens, combs, etc.

“Makeshift Weapons” is a term used to represent any everyday object that has been physically altered to enhance it’s potential as a weapon. It can also be used to represent the making of standard weapons such as guns, knives, and bombs out of commonly available items. Makeshift Weapons include those items previously mentioned, that are mistaken for “Improvised Weapons”.

The underlying concept of “improvised weapons” is to learn how to use commonly available objects in order to survive physical altercations. It’s not about learning to fashion a killing instrument out of a hanger and duct tape, or making bombs out of common household chemicals. We’ll leave that to the criminals!

The fact is, that the majority of violent attacks that occur in the modern world, involve weapons of some sort or even multiple assailants. This being the case, we must understand that empty-hand defensive skills may not be enough. In order to survive such violent encounters we must have a tactical advantage. Some instructors would suggest carrying a knife, a gun, or some other “modern” personal protection tools. Although, on the surface this sounds like good advice it doesn’t take into consideration that there are laws governing the use of such tools. These laws vary from state to state and country to country, making it extremely difficult advice to follow. Not to mention the fact that some people make moral and/or ethical decisions not to carry such destructive personal protection devices. Taking all of this into consideration we come to realize our best tactical advantage comes from learning how to use our entire environment in defense of ourselves and our loved-ones. Obviously, this knowledge can only come from research, crisis rehearsal, and physical practice of the foundational concepts.

Once we understand how valuable the study of improvised weapons can be we must then learn which common objects are suitable for personal protection and which ones are not. The truth is that almost anything can be used effectively with proper research and training.

Here is a list of some of the common items which might be used in improvised fashion:

Obviously there are literally thousands of everyday items that could be placed on this list, but that isn’t the goal of this article. The goal is to give the reader a solid understanding of the concepts and then lead them into the proper direction for personal study and growth.

Once you start to look at these items with a new perspective, you will look at all items with the same perspective. It will literally change your view of the world and you will realize that you are never unarmed.

Now that we have discussed the definition of “improvised weapons” and listed some everyday items which fall into this category, let’s talk about training.- If you currently study the martial arts, it’s just a matter of taking your martial skills and learning to apply them to these various improvised tools. The key is to use the basics and body mechanics that you already possess rather then trying to learn new skills or new body mechanics. If you are fairly proficient in the martial arts, this is a relatively easy task to accomplish. However, if you are not a martial artist you might still be able to develop some basic skills with improvised wepaons with just a little creativity and some investment in training. Unfortunately, this can only take you so far. If you want to develop some decent skill you will want to seek out a qualified instructor who can teach you the skills that you might need to survive those unfortunate altercations.

In conclusion, violent encounters are an unfortunate part of life and they are something that we must all understand and prepare ourselves for. In the event that you happen to find yourselves in such an altercation you want to be sure that you are prepared beforehand, because once it takes place you might not have another opportunity to make those preparations. The study of improvised weapons is a big step in this preparation process. Invest the time and energy into this study and you won’t be disappointed.

**Please note: It’s the reader’s responsibility to gain more knowledge by seeking out qualified instructors in the use of improvised weapons as well as researching the self-defense laws in their own states and jurisdictions. The author assumes no responsibility for the use or mis-use of this information. USE AT YOU OWN RISK!

Joseph B. Walker - January 6, 2018
We use cookies to ensure that we give you the best experience on our website. If you continue to use this site we will assume that you are happy with it.OkRead more