One of the most important things you can learn about dealing face to face with suspects is the concept of relative positioning. Relative positioning means how far you are from the suspect, and it is made up of the reactionary gap, the danger zone, and reaction time. 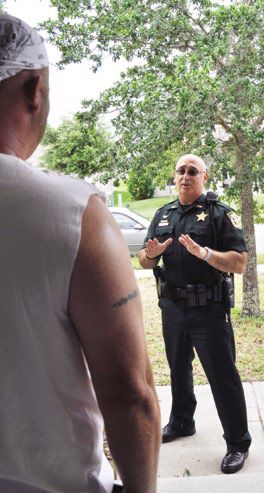 Let’s look at some considerations to take into account when closing the gap and going hands-on. And always remember, the process could begin sooner than you think.

Threat Awareness
Unless caught in an exigent circumstance, you have some sort of time delay before you confront the suspect. You must use that time wisely.

Find out what you can. Have you or anyone on your shift dealt with this person before? Does he have a violent history? Does she run upon making contact? Is the suspect known to carry weapons? What does the call history say; are you heading into a fight?

These and other questions will give you an idea of what you’re up against and how best to plan your approach.

Situational Awareness
This is where you must take your environment into consideration. From the get-go, you should already be intimate with where you are working.

Move to Contact
As you move into your reactionary gap, you should be sizing up the suspect and looking for pre-attack indicators. Sizing up the suspect includes trying to determine his or her physical fitness level. Is the suspect a slug or does he look like he can fight for a while? You also need to look for clues that might lead you to believe he or she may have special training or skills.

If you arrive and the suspect is in the middle of arguing, how is he or she standing? Does he look ready to fight or is he so engrossed in the argument that he’s not paying attention?
If your suspect is fighting, what kind of skills is she demonstrating? Is strength her primary weapon or does she have crazy skills at something like boxing, wrestling, or martial arts.

Look for pre-attack indicators. What was the suspect’s initial reaction to your arrival? Did the suspect switch her focus to you or is she ignoring you? Does he look like he’s going to run? Does she look like she is getting ready to fight you? Are the suspects throwing around any gang signs that might alert you to the presence of more hostile suspects in the area? Just
keep in mind that sizing up works both ways.

That means the suspect is looking at you for clues on your physical condition and what you can do. Many violent encounters have never developed due to the suspect realizing the responding officer looked like he or she meant business. Notice I said “looked like.” In our business, perception is reality. Looking like you know what you are doing is sometimes more important than what you actually know, because the right appearance can prevent a confrontation from happening in the first place.

We make many snap decisions based on the totality of the circumstances and on
what we think we see. The same can be said of criminals. It has been recorded time and time again during prison interviews that criminals are prone to attack officers they feel are easy pickings. The lesson here is to look and act like you mean business all the time. If you are overweight, sloppy, and use poor tactics, you’re a lot closer to being targeted than you think.

The Danger Zone
The danger zone is where the rubber meets the road. Once the decision has been made to make a physical arrest, the suspect only has one choice: comply. If he or she doesn’t comply, you can either disengage or escalate.

I suggest you deal with every suspect firmly but with respect. Any seasoned officer will tell you that’s sound advice, and it gets you to where you want to be more times than not. However, regardless of the level of cooperation, you must be prepared to move in and gain control quickly in order to make your arrest. Your situation can change in an instant.

Some officers prefer to use a bit of deception here. For example, they might pretend their contact means nothing and ask to pat the suspect down for officer safety reasons. Once the suspects are turned around, these officers go in and handcuff them. The theory behind this is it catches the suspects off-guard, which helps to reduce their ability to resist.

Though this type of deception works for some, I have also seen it create more problems than it solved. As an alternative, I prefer to tell the suspects they are under arrest and order them to turn around. At this point, they are either going to cooperate or not. If they don’t cooperate and start to resist, I want it to be on my terms as much as possible. The earlier I know they are going to break bad, the better it is for me and the worse it will turn out for them.

Hands On
Resistance to a physical arrest is part of our business, and we must be prepared to deal with it. In this modern age of technological wonders, I feel we are losing our ability to close the gap and seal the deal. Our hands-on controlling techniques are taking a backseat to technology. We stay a safe distance away and never want to move in. We place too much weight on things like conducted electrical weapons (CEW) such as TASERs.

Some agencies fearing work-related injuries encourage the use of CEWs as a first choice, not because of officer safety but because of rising healthcare costs. Though fine tools when used appropriately and under the right circumstances, CEWs are not the end all. They have been
known to fail, they have been defeated, and have sometimes just had a minimal effect on the suspect.

Closing the Gap
1. Relative positioning is a crucial factor.
2. The reactionary gap is six to nine feet if you can see their hands, or 25 feet if you can’t.
3. The danger zone is an area that you need to feel comfortable working in.
4. Technology will never fully replace going hands-on.
5. Train and stay proficient in closing the gap, so you don’t end up an FBI statistic.

We will never fully replace hands-on techniques with technology. You still need to know how to move, strike, and obtain control. If you are not working on these techniques regularly or are not seeking advanced training beyond what your academy provided you, you are starting each shift in the hole, a hole that under the right circumstances you will not be able to climb your way out of. Like many high-liability skills in law enforcement, without attention and practice, combatives are a diminishing skill. If you don’t train, you lose your proficiency and are well on your way to becoming a future FBI statistic.

Proper Handcuffing
The single most important factor in closing the gap is the one most often forgotten: obtaining control of the suspect before you handcuff. Too many officers try to handcuff someone while he or she is still fighting.

You can’t fight and handcuff at the same time. What usually happens when you do so is you only get one handcuff on, and in doing so, you have unwittingly armed the suspect with a deadly weapon.

Another problem with failing to gain control is what I call “the dog pile effect.” It happens when multiple officers are on scene and they don’t work together. Instead of a coordinated effort like the swarm technique (which also takes practice), the dog pile effect ends up looking like a computer-generated free for all. The dog pile effect usually leaves the viewers of the 6 o’clock news scratching their heads after seeing the cellphone video footage.

Closing the gap is a skill set that must be maintained, practiced, and refined. You must use your relative positioning to your advantage and feel comfortable working in the danger area. You need to feel very comfortable dealing with suspects up close and dirty. If you haven’t practiced closing the gap, gaining control, and handcuffing lately, I’d get with someone and change that. Otherwise, we may have to read about you or see your video on the Internet.

Amaury Murgado is a special operations lieutenant with the Osceola County (Fla.) Sheriff’s Office. He is a retired master sergeant in the Army Reserve, has more than 25 years of law enforcement experience, and has been a lifelong student of martial arts.

Amaury Murgado - October 26, 2010
We use cookies to ensure that we give you the best experience on our website. If you continue to use this site we will assume that you are happy with it.OkRead more