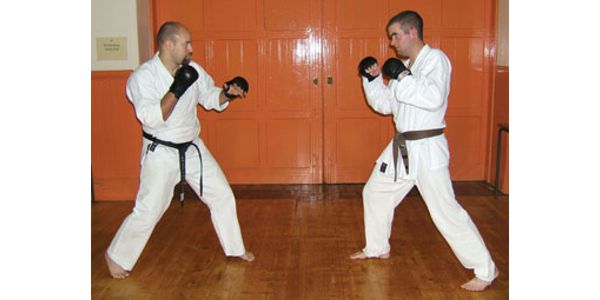 In this series of articles we are discussing how to make your sparring relevant to real situations. As we’ve discussed in previous articles, the sparring in many dojos has little in common with real situations. Karateka train for a variety of reasons, so it is to be expected that they will spar in a variety of ways in order to address a variety of goals. If being able to protect yourself is one of your reasons for training, then your sparring needs to specifically structured so that it has relevance to the street.

In previous articles we have covered six of the keys to realistic sparring. In this final part, we’ll be covering the final four keys to making your sparring relevant to the street.

Important Note: All sparring is potentially dangerous and must always be closely supervised by a suitably qualified and experienced person. If you don’t have such supervision, don’t try out the methods we’re going to discuss!

Don’t limit the techniques or ranges
Anything goes in a real situation and hence you need to ensure your street sparring isn’t limited. As a karateka, you need to ensure that you bring grappling into your sparring. There are a great many grappling techniques in kata and they should be brought into everyday training. The more wide-ranging you make your sparring, the more realistic it will be.

A real fight has no rules, and hence you need to ensure you ignore the rule book when you structure your street sparring. It’s pretty easy to ignore the purity-based restrictions, but great care needs to be taken when ignoring the safety-based ones. In some instances you can substitute dangerous techniques for less dangerous alternatives. For example, if your partner secures a grip on the knot in your belt, it’s a safe assumption he could also have attacked your groin in the same fashion. Likewise, putting the thumb on your partner’s forehead above the eyebrows can be used as a substitute for eye gouges.

Substitutions like these ensure that you develop the skills to use and defend against such attacks. The flaw in this training is that if you’re not mindful of the intent of the substitution, you may find yourself using the substitution in the street at a time when you should be using the real technique! As I said in part one of this series, always be aware of the flaws of any drill. Because the alternative is to omit the techniques completely, I feel substitution is the best way forwards.

In addition to substitution, you can also reduce the intensity of certain techniques to ensure safety. For example, if you nip your partner with your teeth, they can be sure they would be missing flesh if the fight was for real. It is very important that your sparring is closely supervised by a suitably experienced and qualified person when bringing potentially dangerous techniques such as biting and gouging into your sparring. The person supervising the sparring will be able to advise you on substitution, omission and intensity.

By not limiting the techniques or ranges of your sparring you ensure that “blind spots” don’t develop and that your sparring has relevance to a real fight.

However, it doesn’t always work that way in a dojo or competitive bout between two martial artists. In that environment, using complex and sophisticated methods can catch your opponent off guard. The simple methods will be more easily recognized and countered so it can be advantageous to use methods that are “off radar.” In almost all combat sports, much of what was winning fights a few years ago is now obsolete because it is easily recognized and hence easily countered. Competitors need to enhance, disguise and evolve their techniques if they are to keep winning. Complex and indirect can work fine in the dojo or in sport. The complex and indirect won’t fare well in the street, however.

When sparring for the street, be sure to stick to the basics. Many martial artists inadvertently associate the term “advanced” with “better.” That is not how it works in the street. There is the basic stuff that works; and the advanced stuff that doesn’t work. There are no such things as “advanced self-protection” or “advanced street fighting.” When sparring for the street, keep everything simple and avoid any temptation to get clever.

It is also important to emphasise techniques that will have the greatest effect. A head shot will have a greater effect than a strike to the body. A strangle will finish the fight, but a joint lock may not (you can’t fight when you are unconscious, but you can fight with a broken joint). Methods such as body shots and joint locks still have a role to play, but priority should always be given to the techniques that will end the fight the quickest.

For street sparring, stick to techniques that are simple, have the best chance of working, and are likely to have the greatest effect.

Successfully fighting off two or more assailants isn’t anywhere near as easy as depicted in the martial arts movies. With enough commitment and ferocity it is possible successfully take on more than one person, but it is never advisable to do so.

A few years ago I was teaching street-based sparring drills to a mixed ability group. As part of this session we were practicing two-on-one sparring. At one end of the room was a young, relatively inexperienced martial artist who was visibly nervous at the prospect of having to simultaneously face two opponents. At the other end was a group of extremely experienced martial artists. The members of this group had multiple black belts and were all skilled fighters. This group was actually excited at the prospect of getting to test their skills against two opponents.

When I signalled for the fights to begin, the experienced martial artists went off with all guns blazing … but invariably were quickly taken off their feet and beaten up by their colleagues. By contrast, the inexperienced martial artist did not want to test his skills. He wanted out of there! He ran all around the dojo and hardly had a punch land on him.

The moral of the story is that when faced with more than one person, don’t stay and fight them but instead run away the instant you can. As I said earlier, you don’t need to outfight multiple opponents in order to protect yourself from them. Sparring with multiple opponents really brings this lesson home and lets you practice your escape skills.

Sparring with multiple opponents also teaches you a lot about how you should face a single opponent in the street. What begins as a one-on-one situation in the street or bar can quickly escalate. Criminals frequently work in gangs; just because you can’t see them doesn’t guarantee they don’t have backup near by.

As an example of how the possibility of multiple opponents changes things, let’s briefly discuss ground fighting. In the dojo taking the opponent to the floor and trying to finish the fight on the ground with a triangle choke or other such technique can work great (Photo 1). 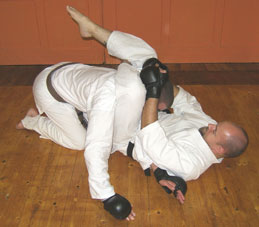 However, if you use the same methodology in the street, a second person could get involved and you would get stamped flat (Photo 2). Fights can go to the ground so it’s something you need to include in your training and sparring, but it’s never the smart choice in the street. 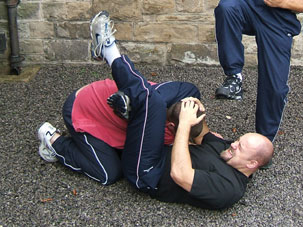 A friend of mine was once mugged at an ATM by what he initially thought was just one person. He’s a big guy and told the mugger to leave him alone (well, that’s not exactly what he said, but my mother would disapprove of me writing the real words!). At that point the mugger pointed across the road where his previously unseen colleague opened his jacket to reveal a huge knife. My friend wisely decided to hand over his cash. He could also have hit and run, but I feel he undeniably made the smart choice. However, what would have happened if he’d decided to fight? Or worse yet take the fight to the ground? I think we can safely say that the initial one on one exchange would not have stayed that way for long and my friend would have been stabbed.

In your street sparring be sure to play with the numbers: one on two, one on three, two on three etc. You’ll learn a lot about how to approach real situations.

Spar when exhausted
Real situations are very stressful. Your heart rate will go though the roof, you may feel nauseous, your muscle control will be greatly reduced, you will want to be anywhere else on earth, and you may feel frozen to the spot. Being mentally and physically able deal with these sensations is a key part of preparing for the street.

A good way to recreate these sensations is to fight a fresh opponent when you are exhausted. I don’t mean a little bit tired, I mean exhausted! Your heart rate will be high, you may feel nauseous, your muscle control will be greatly reduced, you will want to be somewhere else and you won’t feel like fighting. Not wholly unlike a street situation.

There are a great many ways to exhaust yourself. You can do some intense exercise before sparring, do a lot of pad work, or just spar with a number of fresh opponents back to back. However you go about it, sparring when exhausted should be part of your street sparring. You may not want to go to extremes every session, but you should do it frequently enough that you get used to functioning under stress. If you don’t get used to it, all the skills you posses will be rendered redundant by the intensity of the situation.

There are lots of different ways to spar and all have value. Most martial artists train for a wide range of reasons aside from self-protection. However, when training for the street, it is important that your training methods accurately reflect the nature of street situations. I hope the 10 keys we have discussed in this series will help you structure your sparring in a way that is as realistic as possible.