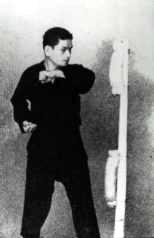 James Mitose, believed in working out on the makiwara for the development of big knuckles and a hard punch or kick. The Grandmaster believed you could punch or kick out the evil of self on the board.

Born in Hawaii, at the age of four years old, James Mitose was sent to Japan to study the family art of Chuan Fa (Chinese) Kenpo, or Kempo (Japanese) which Mitose Masters had modified successively until it became Kosho-Ryu (old pine tree style) Kenpo. A complete system of self-defense, (Kosho-Shorei), includes religion and training in the arts and humanities in addition to the actual self defense techniques (Kosho-Ryu).

Following fifteen years of training, James Mitose returned to Hawaii and decided to share the family art with people of all races. Opening a school, he found that very few students mastered the system which included training in religious philosophies in addition to actual fighting techniques.

After fifteen years of teaching, only six students would be awarded the rank of Shodan (Black Belt). These were Jiro Nakamura, Thomas Young, William Chow {later known as Professor William Chow of Kara Ho Kempo}, Paul Yamaguchi, Arthur Keawe, and Edward Lowe. It was in 1953 that James Mitose retired from active participation in the martial arts for reasons that are not clear even today. However, it is believed that James Mitose saw that his students were unable or unwilling to live their lives within the Kosho-Ryu philosophies. Other rumors have surfaced, but never confirmed. It is not really known exactly why Mitose decided to stop teaching.

To understand James Mitose’s beliefs, one must understand the Philosophies of the Mitose style. What is the difference between “True Self-Defense” and “Self-Defense”?

It is widely believed and preached that Self-Defense allows the person the right to defend oneself by injuring or even killing the person who is about to bring them or their loved ones harm, but this is not so. True Self-Defense is no body contact or violence, not to touch the opponents body in anyway. One should be happy if he or she has a chance to escape from harm. Having a clear conscience, knowing that no harm has been brought to others and building ones own mind and spirit is what is important. The true object is to surround onesself with peace, confidence, and harmony.

The physical aspects of True Self-Defense are essential to the mental aspects. Humanity is spiritual and physical, so we can not deny one in favor of the other.

“IS THERE ANY HIGHER FORM OF TRUE SELF-DEFENSE THAN THAT OF PEACE AND HARMONY? ”

March 27, 1981, was a sad day in the history of Kosho-Ryu. The Honorable Great Grand Master James M. Mitose passed away while serving a sentence at Folsom State Penitentiary. It is true that this humble and religious human being who dedicated his life to the martial arts, died in prison. Why was he incarcerated? It is shrouded in confusion and mystery. To this day, no one can factually state or determine the entire truth, and it can be expected that the truth will never be fully revealed. From the day the 21st Great Grand Master retired to the day of his passing away it is noted that he never opened a school. However he did teach selectively still trying to pass on the philosophies of the style of Kosho-Ryu.

Dan Tosh - January 31, 2011
We use cookies to ensure that we give you the best experience on our website. If you continue to use this site we will assume that you are happy with it.OkRead more