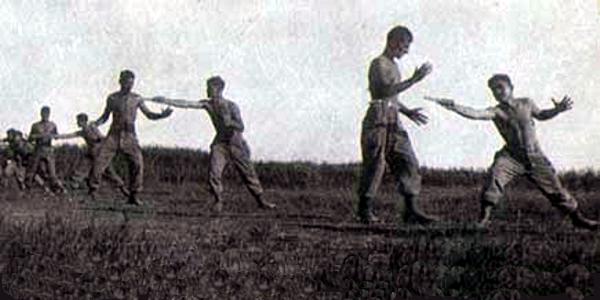 KAPAP (Krav Panim Le Panim) began in the period of the “Palmach” (strike forces – plugot machatz in Hebrew) – the original Israeli elite units, which remain the prototype for all special forces, to this day.

KAPAP, which means face to face combat (krav panin l’panim in Hebrew), included all of the various fighting techniques required by a soldier in the battlefield. Soldiers trained in hand to hand combat (krav maga in Hebrew), stick fighting using short and long sticks (similar to the Jo and bo), live and edged weapons, and obstacle courses designed to toughen them physically and mentally.

It is important to remember that two units operated within the framework of the Palmach. The first, the Palyam, was the prototype for the Sea Commandos, the elite navy unit in Israel (similar to the American Navy Seals). The second unit, called the German unit, was an undercover guerilla force that penetrated Nazi controlled regions and infiltrated the ranks of Nazi units. The German unit operated together with the “Avengers” (nokmim in Hebrew), a secret team that hunted, arrested and sometimes executed fugitive Nazi war criminals across the world.

Later on, with the establishment of the official armed forces of the State of Israel, Kapap became an integral part of the training and continues to this day in elite units such as Yamam.

History of Lotar and Kapap