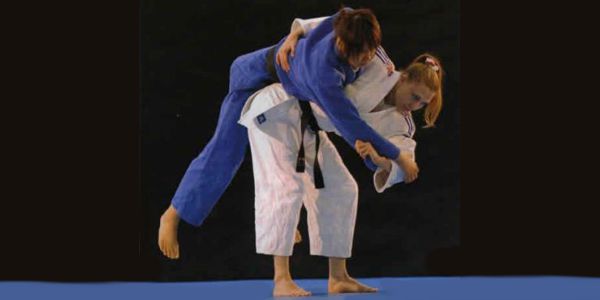 A basic and popular Judo throw is O-Goshi, the well-known hip throw. It is an ideal throw for shorter people to employ against taller and rangier adversaries, requiring a low center of gravity and good balance. In sport competition, much of the throw is, of course, dependent on a good grip on the adversary’s attire, the rugged and durable judo gi. Though it can also sometimes be done with a simple arm under-hook. However, in a street encounter, there are a number of variations on this simple but effective defensive technique which can well serve someone being attacked—especially a smaller person, or a woman who is being assaulted.

The throw itself simply requires a spin into the opponent’s groin area, with one’s own backside, the placing of one’s feet closely together at a 45 degree angle to each other, inside heel to inside heel, a dip at the knees, a backwards thrust into the crotch area with one’s buttocks, a lift with the throwing arm (right or left) and a pull on the opponents free opposite arm, usually a pull around-and down at somewhat the same time. The result, when properly executed, is to send your opponent flying. And crashing to the ground. Assuming the opponent is NOT schooled in “how to fall”, this one simple move can conceivably end any encounter on-the-spot. As the opponent very likely will have the wind knocked out and be unable to continue the fight.

In sport, this is all often done using the gi as a hold or a fulcrum to execute the throw. On the street, this is not a practicable approach as few attackers on the street are conveniently attired in a gi. And shirts, blouses and tee shirts—especially tee shirts—are seldom durable enough to withstand the strain of being used in such a way. Therefore, on the street, if attacked and the opportunity arises to implement this throw, one needs to adapt to the realities of street combat. Merely by substituting the under-hooking of the attacker’s inside arm (the arm closest to you), beneath the armpit, and then grasping the opponent’s remaining free arm at about the wrist should suffice to allow you to then execute the throw in almost the identically same manner as you would do in Randori (free play, or scrimmage) in a Dojo.

Another use of this throw on the street, albeit it in a more modified form, is as a counter to being placed in a rear naked choke. In this situation, one needs to first do the unexpected by pinning the opponent’s arm being thrust around your neck TO your own chest. Then, depending on which arm the attacker is using to choke you, you want to place your foot on that same side around and to the outside of his corresponding foot, Then dip and twist in the opposite direction all at once. This should throw the attacker around your hip, flying out of control, and leaving his choking arm exposed to several options (such as a figure four arm bar) which can be employed to control or incapacitate him.

“Options.” One of Hanshi Miskel’s favorite words in my years of training with him. “From here, you have OPTIONS”, he would often say while demonstrating a technique. “From here, you can do this-this-or-this. OR, you might want to do this-this-and-this, instead. It is always good to have options.” And he is right. It is. And with O-Goshi, you do have many options starting with HOW to excecute the throw itself, and then with how to follow up on the throw once you have successfully used it.

That’s the beauty of O-Goshi, and of Judo, itself. And, really of ALL martial arts. They give you OPTIONS, whether in sport competition, or in the cruel world of the streets, from where an attack can come at any time. And from anyone. It is always better to be prepared than not to be prepared. And to be equipped to handle anything which might come your way. Equipped to at least have a fighting chance. That’s why I recommend the study of martial arts to everyone, especially to our young people. It not only teaches them discipline and respect, but equips them for Life—and, yes, even for survival in an ever more dangerous world. Judo is especially suited for this, as it is almost “a pacifist’s martial art”. In that it’s focus is on incapacitating an opponent without necessarily doing him any lasting harm. Whereas most other martial arts are more aggressive in design and intent. It is, indeed, for this reason that Judo derives its very name, which translates to “The Gentle Way”. Though there is nothing gentle about falling flat on your back to the ground if you have never learned “how” to fall. And, sadly for them, most street toughs have not.

USAdojo - September 18, 2010
We use cookies to ensure that we give you the best experience on our website. If you continue to use this site we will assume that you are happy with it.OkRead more