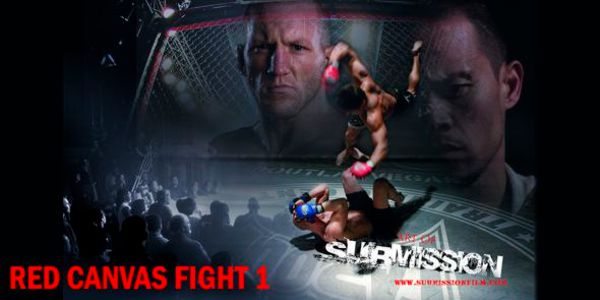 San Jose, CA – September 13, 2012 – Red Canvas Fight Promotions, the only fight promotion to showcase the Art of Submission in the cage and on the big screen, will make their debut in the MMA world this Saturday night with Art of Submission 1. The organization announced today that Emmy award winning host Jordan “Jay” Adams and Actor Ernie Reyes Jr. will call the action. Red Canvas Presents: Art of Submission 1 will take place on Saturday, September 15 at the San Jose Civic Auditorium in San Jose, California.

Award winning host Jordan “Jay” Adams has over 25 years of experience as a television personality and has received two Emmy Nominations and an Emmy win. As a commentator, Adams has called the action for many leading MMA promotions worldwide. Adams also currently hosts two popular combat sports television shows, United Fight Alliance (UFA) and “Jay’s Brawl Call.”  Red Canvas is part of the United Fight Alliance (UFA) Network and will be airing on UFA’s television network distribution channels which reach over 88 million homes.

“I am looking forward to commentating for Red Canvas Fight Promotions alongside film star and martial arts veteran Ernie Reyes Jr.,” stated Adams. This is the first time in MMA history that a fight promotion will host live MMA events in conjunction with the release of a full length feature film. I’m very excited to be a part of it!”

Actor Ernie Reyes Jr. is the star of Red Canvas Productions full length film ‘Art of Submission’, produced and directed by Ken Chamitoff and Adam Boster. He is also an experienced martial artist.

Reyes Jr., a Strikeforce veteran with a professional MMA fight record of 3–0, started out fighting for Muay Thai and kickboxing organizations. He fought Anthony Elkaim the WKA ISKA Champion and knocked him out in the 3rd round. His next two fights would be won by decision, including a unanimous decision over Veasna Thach.

According to Reyes Jr., “I can’t wait to call the action on Saturday night for Art of Submission 1 in my home town of San Jose! The card is stacked with compelling match-ups and elite local talent. Fans in attendance will also get a sneak peak of the movie ‘Art of Submission’ prior to its official release. Clips from the movie will be showcased between bouts. Fans won’t want to miss it!”

The fight event will take place on Saturday, September, 15 at the San Jose Civic Auditorium in San Jose, California. Doors open at 5:30pm PST. Fights start at 7:00pm PST. Fight fans will not want to miss this! Tickets are on sale now. Fans can purchase tickets on-line at www.SJTIX.com or www.redcanvasfightpromotions.com Tickets can also be purchased at the venue.

Fans can also watch Art of Submission 1 live via internet pay-per-view on MSXN.TV.  The fights will air live starting at 7:00pm PST/10:00pm ET.

About Red Canvas Fight Promotions:
Red Canvas Fight Promotions is the ONLY MMA promotion to showcase the “Art of Submission” in the cage and on the big screen by hosting live tournament style MMA events in conjunction with the release of the full length martial arts film ‘Art of Submission’. The Promotion is slated to host tournament style MMA events every month throughout the country in various regions. Following each live event Red Canvas will release the film ‘Art of Submission’ on multiple screens throughout that city as part of an ongoing project. The project will include the production and release of subsequent ‘Art of Submission’ films. Many of the fighters that compete in the live events will be featured in future Red Canvas films. For more information please visit www.redcanvasfightpromotions.com.

About the Movie “Art of Submission”:
‘Art of Submission’, starring Ernie Reyes JR, Ving Rhames, Sara Downing, MMA Legend Frank Shamrock, UFC fighter Gray Maynard, Mathias Hues, Maxim Model Fernanda Romero, Maria Conchita Alonzo, John Savage and George Takei is a full-contact action drama that shatters emotional boundaries. The film is loaded with authentic mixed martial arts and layered with dynamic heart-to-heart combat. It is a story of redemption. It is a reluctant “Hero’s Journey” reflecting true stories found within the ranks of martial arts schools throughout North America. While inspirational at its core, it explores the shrouded wounds of fathers and sons, and has within it the power to transform and unify the entire family. Viewers consider the story victorious and transcending. For more information on the movie and to view the official movie trailer please visit our entertainment website Martial Arts Entertainment or www.artofsubmissionfilm.com.