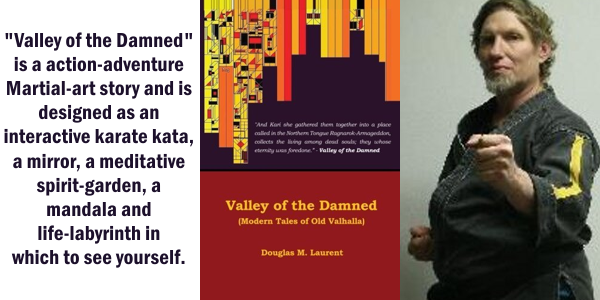 Valley of the Damned Epic Martial Arts Poem By Douglas Laurent is an action-adventure Martial-arts story and is designed as an interactive karate kata, a mirror, a Zen-like meditative garden, an allegory, mandala and life-labyrinth in which to see your own self. If you are going to ride with those three killer-phantoms, you had better strap in, because they are looking for you!

About the Poem
For millennia, Epic poems have been some of the world’s most powerful sources of inspiration, capturing the high essence of Gods, heroes, romances, glories, and tragedies. From Homer’s Odyssey to Arthur to Beowulf, and from Gilgamesh to the Mahabharata, these ancient stories transcend time, revealing to humanity our innermost secrets. Conveying a deep sense of the mystical, Epics carry with them a sweeping sense of life in the fullest measure, as men and women of renown stand tall against the backdrop of history and destiny, our present being firmly rooted in the past . . .

Valhalla! Norse gods, spirits o’ war, shades, swordkettering pallorous ghost traces, werewolves and pigs, specters, wraiths, banshees and other haunting creatures of untold dread all come together in this Epic action-packed, martial arts adventure never before heard of tale on earth—”The Valley of the Damned!” In this “Forgotten tale that no one knows, except those who enter therein,” all are invited to venture into the exotic serrating unseen Netherworld of the dead, where remnant spirits contend with each other for power and control over kingdoms, unspeakable legions of fallen shades, and the most prized “possession” of all―the immortal human soul!

Ride with three killer-phantoms on their quest to pursue the vainglorious “karate” movie star Mark Theman for his soul―the despised arrogant human whom all spirits desire to capture for their own sinister purposes! Trail the perpetual teenage Valkyrie Kari “mass-battle” artist, known for her mesmerizing psychotic poetic-sword skills and who will confront all odds to win. Shadowing her is the jackal-like Angel-Heart, amoral sword-slingin’ duelist who always dogs her, never missing an opportunity to exploit and track with Dark Storm, ruthless bounty huntress who will stop at nothing in order to seize the power that Theman possesses—his soulish living human “aura!”

Based upon the works of cinematic masters such as Japanese director Akira Kurosawa (The Seven Samurai 1954) and Italian director Sergio Leone (The Good, the Bad and the Ugly 1966), Valley is “constructed” as a movie. Words, sentences and stanzas function as “camera shots” for full lucid visual impact, pulling readers in and out of their own self-made focal realizations that can only but belong to their innermost soul-searching personal Netherscape.

From the “mortal” aspect, what is covered in the work is a survey of the modern American martial arts scene. A study of souls in action, readers may recognize that “Valley” is a social commentary, allowing insight into the bizarre, deadly, icy undercurrents and riptides of the unseen “Martial Art Deadlands” that many traverse. Rich in visual and “audio” description and replete with scores of villainous and heroic spirits, “Valley” is an outrageous tale of valor and woe, of damnation and redemption, played out on an immense spiritual killing field where spectral phantoms are tried and tested in the fires of their (and our) own passions. In “Valley” readers will:

“Valley” is laced with myth/hist notes from the world over. (S)word-plays and inter-twistorted tales chorridor and pierce the Epic with elusive mind-resonances, shadowy mental focal lengths, pale thought-illusions, intangible emotional mirages, insubstantial spring-loaded will-cages and graspless realizations nigh unto dimensions invisi’bled, labyrimazing readers down into the inner sanctums of her lores; the uncanny, disturbing veiled Nether and the grim, obliquitious secrets she brings to dark! “Valley” culminates in a superlative modern fable that will stir the imaginations of those hearts who desire a bold, soul-searching undertaking into the rhapsodic core of their own Heavenly stratums or the dankest helks of their own stark raving mad personal Hells!

About the Author
About the “Wereword” Poet: Douglas M. Laurent, M.A., English, B.A., Film, is a graduate of Northeastern Illinois University and Columbia College, Chicago. A practitioner of over 40 years, he holds a black belt in Yamashita Shorin-ryu karate and is an adept in Filipino martial arts and Wing-chun kung fu. According to the Japanese Samurai tradition of “Pen and Sword in Accord,” Mr. Laurent combines the old warrior ways with European myths, uniting global warrior cultures and otherworldly themes into a groundbreaking Dantean-like poem of Epic proportions. Using world-class literature and cinematic screen technique, Mr. Laurent welds the finest elements of swordplay, history, sagas, hist/myths, beliefs and technology into a heroic tale so far-reaching it touches the very vaults of eternity itself as well as the deepest recesses of the human spirit. A 40-year life study compressed into one volume, Valley of the Damned is the avant-garde martial arts poem of this generation. Currently Mr. Laurent teaches kung fu in Scottsbluff, Nebraska.