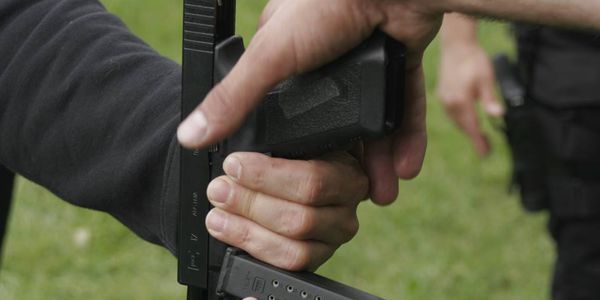 Events of the last several years have finally sent the “wake-up call” to the entire world. The United States begrudgingly joins with many countries in the sobering realization that safety is no longer a guarantee. Most are beginning to see the big picture. Crime and terrorism are no longer threats that happen to someone else. Violations of public and personal safety have become increasingly open and brazen.

One of the weapons most utilized on the streets is a firearm.

In the eyes of the Instructors within the LOTAR / Kapap system dealing with real world, self-defense is of paramount importance, and it is for this reason that one of the most practiced components of LOTAR / Kapap is firearm defense.

LOTAR / Kapap was forged from the experience of continuous conflict. The evolution of the techniques and methods utilized within the LOTAR / Kapap system have all been proven and tested within one of the worlds most active and elite Anti Terrorist Units. This unit, known as the “YAMAM” understands all too well that the consequences of mistakes mean life or death.

LOTAR / Kapap specializes in streamlining the techniques until all that is left are natural and effective techniques to deal with a threat in the quickest and most instinctive way possible. The Instructors at LOTAR / Kapap have trained numerous Law Enforcement and Military personnel in self-defense and anti-terrorist techniques for many years. However, the LOTAR / Kapaptechniques are now being shared with the public for the first time outside of Israel.

Leading the progression of LOTAR / Kapap training is former Israeli Defense Force Major Avi Nardia , Major Avi Nardia is a veteran martial artist and during his 24 years as a reserve officer, Avi Nardia (Major, IDF Res.) served as an Official Hand to Hand instructor and safety officer. He also serverd in an Israeli Police special Counter Terror unit as an intelligence team member with the rank of Staff Sergeant Major (NCO) and as its official defensive tactics/CQB instructor. From his experience Avi has developed the six points for firearm defense.

2. Understanding the Weapon
Understanding the weapon and how it is utilized. Remember edged weapons never run out of ammo but guns do. Firearms can jam or malfunction. With proper instruction you can learn techniques to effectively cause a weapon’s malfunction while disarming an attacker. It is for this reason; an understanding of a firearm’s mechanism is of paramount importance. You should be able to understand and identify the differences between a revolver and a semi automatic weapon; the difference between a Handgun and a Shotgun or rifle.

3. Situation Evaluation
Evaluate in an attempt to controlling the psychological aspect of your situation. Focus and stay in control of your emotions. For most training is required to stay calm and focused internally in spite of your outward appearance. Your body language can easily escalate an already emotionally charged situation. The attacker’s body language can provide clues as to his intentions. You must train to begin an understanding of techniques in attempting to control the situation verbally and physically. You must evaluate the attacker. Is he a punk kid that is very excited and seemingly inexperienced or is he a professional criminal that is under control? Understand that if you see the weapon, it is probable the attacker does not have the intention to just shoot, the attacker wants something. This behavior on the part of the attacker can allow you valuable moments, giving you the time to make choices. To defend or not to defend.

4. Timing
Understand and train in the use of Timing. You must learn to utilize timing to your advantage. If your evaluated decision or only option is to attempt to disarm an attacker, you must move quickly, decisively and unsuspectingly to control and take the weapon away, like a magician that is trying to make a watch disappear off of someone’s wrist.

5. Situational Awareness
Possess awareness of your surrounding environment. You must be aware of your surroundings at all times. An attacker seeks the unaware and unsuspecting. In every surrounding make mental notes of potential escape routes, items that can be used as weapons and other people that will be placed in harms way should a threat or conflict arise. In the case of an attacker with a firearm, you must pay attention to where the bullet will be discharged if fired. Either as a law enforcement officer with your partner or a civilian with a bystander or family member, you must know where others are located when moving the weapon.

6. Post Conflict Details
Be ready for the post conflict. It has been found that people who have been attacked often do not remember the face of the attacker even though they were looking right at it. Remain calm and remember to visualize and take mental notes of details. Try to take a mental photograph of the attacker’s face, clothes, weapon, and any distinguishing marks on the person body or vehicle.

In conclusion we need to point out the key elements essential to these points are awareness, timing, speed and understanding distance. You must pay very close attention to controlling the weapon before any additional strikes or action. Once the weapon in truly in your control then you can strike to multiple targets as your style and situation delegates. You must practice the techniques with each hand as well as under different types of stress levels i.e. Cardio intensive workouts. Also change lighting and environments to follow real world scenarios. Proper and continued training in these six basic points of firearm defense may very well make the difference between life and death when faced with real world threats. Don’t be caught unprepared it might be the last mistake you make!

Locked and Loaded: Ready to Engage