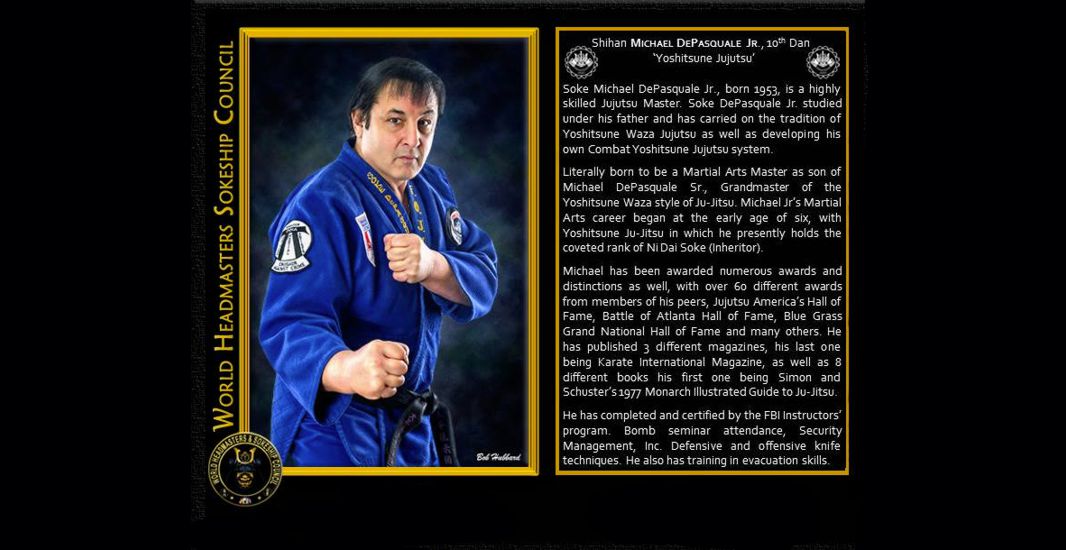 TRAINING
Michael DePasquale, Jr. was born to Michael DePasquale Sr., Grandmaster of the Yoshitsune Waza style of Ju-Jitsu. Michael Jr’s martial arts career began when he was only five years old when he began studying Yoshitsune Ju-Jitsu with his father. He currently holds the coveted rank of Ni Dai Soke or heir to the rank of Grandmaster. Besides his training with his father, Michael Jr. has also been certified by the FBI Instructors’ program and has had additional training in Bombs, Security Management, Inc (specializing in knife and gun disarmament), as well as Defensive and offensive knife techniques. Mr. DePasquale has also had training in evacuation skills.

He also has training in Business Administration from Bergen Community College.

COMMUNICATIONS/MEDIA
Michael has an extensive background in communications. He is currently the Editor/Publisher of Karate International Magazine. KI is the largest full-color Martial Arts and Entertainment Magazine in the World. He is also the Information Provider/ Executive Director of the Martial Arts Worldwide Network, WWW.MAWN.NET. This is the largest single source of Martial Arts news, education and information in cyberspace with over 36,000 pages. Amongst his other ventures, Michael has now completed filming his first feature length film as Executive Producer, Writer and Lead. Not only was he working with the stunt/fight coordination, but he also wrote three songs for the film. The “Cutoff,” is his company — Screen Action Production’s — first step into the Mainstream.

TRAINING & INSTRUCTION
Graduate of the New York Academy of Theatrical Arts
Studied with William Hickey of the H.B. Studios

Founder of the Federation of United Martial Artists (FUMA)- Crusade Against Crime and Drugs, a not-for-profit organization dedicated to pro-active programs of education and training in crime awareness and self-defense.

President of the International Federation of Ju-Jitsuans (I.F.O.J.J.). An international organization dedicated to promoting brotherhood and unity throughout the Martial Arts Community.

At the age of 24 recognized by “Official Karate Magazine” as their ‘Martial Arts Star of the Year.’
AAU East Karate Championship (‘81)
Qualified for the Pan American Team Trials
Founder of the “Action Film Making Seminars”
To date, he has also been inducted in 12 Martial Arts Halls of Fame.

USAdojo - May 30, 2005
We use cookies to ensure that we give you the best experience on our website. If you continue to use this site we will assume that you are happy with it.OkRead more