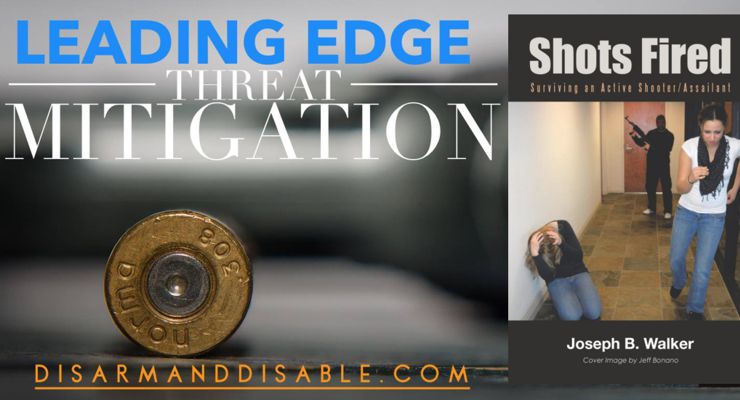 Leading Edge Threat Mitigation Courses are taught by Joseph B. Walker. Seminars, offer corporate and business training and we teach in public, private and in martial arts schools.

In his time with the United States Department of Homeland Security, retired Police Lieutenant Joseph Walker trained several state and federal agencies on active shooter defense and tactics to defend against terrorist attacks.

With 25 years experience with the Reno Police Department, he combined his on the job experience with his expertise in Martial Arts to create the Leading Edge Threat Mitigation curriculum for every audience.

ACTIVE SHOOTER TRAINING FOR AN ORGANIZATION
We all know that law enforcement will respond to a call of “Shots Fired.” But do you know what to do to survive the attack during that critical first five minutes? Learn how to tactically escape from a shooting location. If the choice is made to hide, learn how to hide and use improvised weapons with the intent of ambushing the shooter should the shooter enter that location. Worst case scenario, learn techniques you can use should you come face to face with the shooter where improvised weapons are limited or non- existent.

Leading Edge Threat Mitigation can also provide a comprehensive site assessment to target harden your facility and reduce your vulnerability.

STREET CRIME SELF DEFENSE
In nearly every city in the world we see crimes against people where the criminal uses violence to intimidate and purposely inflict serious harm on the victims. Leading Edge Threat Mitigation teaches how to combat criminals who attempt to impose their will on innocent and law abiding citizens. Learn how to defend yourself against these violent offenders in crimes such as robbery, car jacking, abduction and assault with a deadly weapon.

MARTIAL ART STREET SURVIVAL
Martial Arts schools provide a huge range of material from teaching kata (patterns) to practicing sparring for competition. If your school or martial arts system does not include training on applying techniques in the street, Leading Edge Threat Mitigation can train students in streetwise tactics, so they can successfully stop a street thug’s attack. On another note, whether the aggressor is alone or has partners, you must know what is legal and what is not when you choose to defend yourself and you must understand the essential stages of a violent street crime.

WOMEN SELF DEFENSE
Crimes against women are some of the most violent imagined and these crimes have long lasting effects on the victim and their families. Criminals often exploit the daily routines of women no matter the age, from the youngest to the most mature woman. Leading Edge Threat Mitigation can teach you how to reduce your vulnerability of an attack and defend against crimes ranging from abduction through a violent sexual attack. We work on strategies and techniques teaching people how to survive the attack.

KIDS SAFETY SCHOOL
One of the worst things a parent ever faces is a threat to the life of their child. Child abduction and sexual exploitation is reality in our society and no community is 100% safe. Far too often sex offenders roam our streets, highways and cities, looking for their next target. Leading Edge Threat Mitigation teaches parents and children what they can and should do to reduce vulnerability and how to respond should this unspeakable act become a reality.

PRIVATE LESSONS
At Leading Edge Threat Mitigation, students can choose what they wish to learn in a private or semi-private setting and the instruction can take place where the client chooses. Whether the lesson is a one on one or with a group of friends, relatives or co-workers, Leading Edge Threat Mitigation can customize the material for the needs of the student(s).