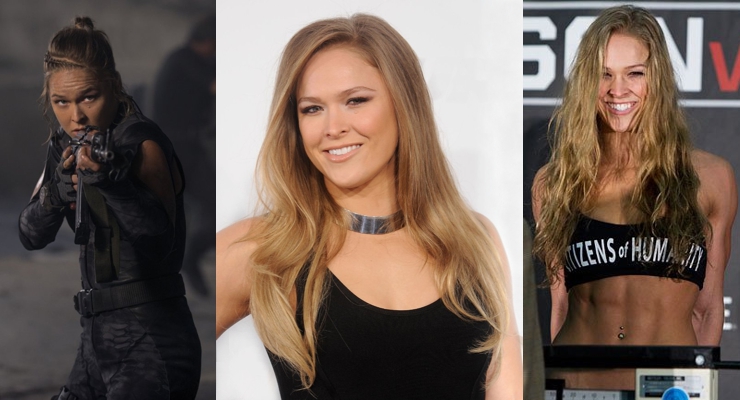 Ronda Rousey is a fourth degree Black Belt in Judo who was, at the age of seventeen, the youngest competitor in judo at the 2004 Olympic games in Athens. In 2008 she won a bronze medal at at the Olympic games in Beijing becoming the first American woman to win a medal since judo’s inclusion in the Olympics.

In 2010 Ronda Rousey decided to become an amateur mixed martial arts competitor after watching the ExciteXC: Destiny fight between Gina Carano and Julie Kedzie. Ronda Rousey never lost an amateur fight. She defeated Miesha Tate on March 3, 2012, to become the Strikeforce Women’s Bantamweight Champion and she was the fourth and final winner of the Strikeforce (2009) Bantamweight World Title.

Even though it was thought that women would never fight in the Ultimate Fighting Championship®, Roonda Rousey didn’t let this hold her back and in November of 2012 she became the first female fighter to sign a contract with the UFC. On February 23, 2013 Ronda fought against Liz Carmouche and won the fight using her signature armbar, becoming the first UFC Women’s Bantamweight Champion. She earned the name “The Arm Collector” because she won her mixed martial arts bouts by armbar. On February 28, 2015, Ronda set the record for the fastest submission in a UFC title fight taking only 14 seconds to tie up her opponent, Cat Zingano, at UFC 184. Marcus Aurelio set the previous record of 16 seconds at UFC Fight Night 13 in April 2008. She ties the all-time fastest submission win in promotion history.

Ronda Rousey fought enormous battles in her life. As a child she was unable to speak until she was six years old after she suffered from damaged vocal cords during birth when the umbilical cord became wrapped around her neck. She was diagnosed with Childhood Apraxia of Speech (CAS), a disorder characterized by the inability to correctly pronounce words and syllables. She had intensive speech therapy several times a week to correct the disorder. Her frustration with trying to communicate made her extremely shy. Another event which had a profound affect on Ronda’s life was the death of her father when she was eight years old. He had a rare disease called Bernard-Soulier Syndrome and after breaking his back he was not able to recover and because death was inevitable, he took his own life so as not to be a burden to his family. Ronda overcome her adversities with the help of her mother, AnnMaria Rousey DeMars, who was a 7th degree black belt and 1984 World Judo Champion, by taking up the study of martial arts. This help her build character and determination, and adversity became a friend.

Ronda is quoted as saying,

“If there’s chaos, it’s good. And I need to put myself in situations where people are going to doubt me because I don’t ever want to be in that lose lose situation where if you win, it’s like, “Oh, of course you won,” and if you lose, it’s the end of the world. I want everyone to tell me that I can’t do it because that motivates me more than anything.”

Rhonda Rousey lost her most recent fights by knockout against Holly Holm and Amanda Nunes, but this hasn’t stopped her. You will soon be able to watch this incredible fighter as a professional wrestler with the WWE.

International Sports Hall of Fame 2018 Honors Ronda Rousey
The great female athlete, Ronda Rousey, was inducted into The International Sports Hall of Fame on March 3, 2018. She is a Olympic bronze medalist and the UFC Women’s bantamweight champion as well as an actress who can be seen in Mile 22 (2018)  Furious 7 (2015), Entourage (2015) and The Expendables 3 (2014).

On June 9, 2018, at UFC 225 in Chicago UFC Ronda Rousey became the first female fighter to be inducted into the Modern wing of the UFC Hall of Fame. The Modern wing honors fighters who turned pro after November 2000. The ceremony took place on July 5, 2018 in Las Vegas and was streamed on UFC Fight Pass. Ronda has been a pioneer in establishing women’s divisions in the sport of mixed martial arts.

This is an immense honor, to not only take part in bringing women to the forefront of this sport, but now the UFC Hall of Fame,” said Ronda Rousey in a statement. “May I be the first of many.

There would be no women in UFC without Ronda Rousey. Ronda is an absolute pioneer who helped me personally, and a lot of other people, look at women in combat sports differently. She accomplished everything she set out to do with UFC and became a global icon and role model in the process.

My Fight Your Fight: The Official Ronda Rousey autobiography