The most surprising thing to learn, though, is that this 7-year-old has won first place in over 40 kung-fu competitions. You would be wrong if you assumed he is some sort of martial arts prodigy. Instead, Andre has harnessed what many would consider a disability and turned it into championship gold. 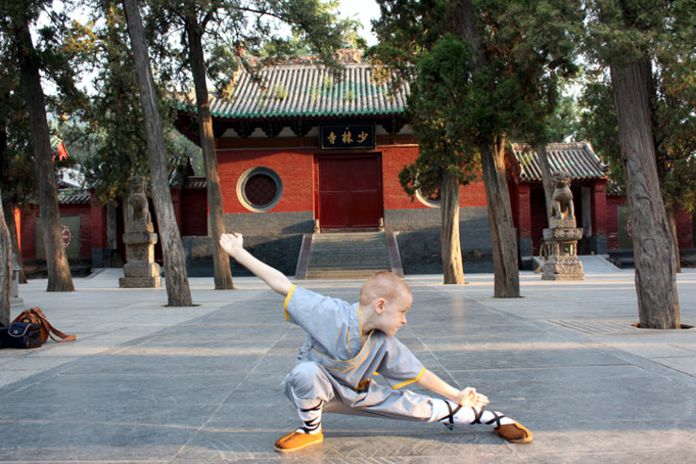 Andre’s high energy level hasn’t always been considered a blessing. In fact, he had so much nervous energy that when he was three years old his muscles would tremble if he had to sit still for more than a few minutes. The doctors diagnosed Andre with a severe case of hyperactivity and explained that he would probably need to be medicated once he reached school age. One possible solution was intense exercise spread throughout the day. This would allow the energy to be burned off and increase the neurotransmitters dopamine and norepinephrine—both of which play leading roles in regulating brain activity. Hoping to avoid medication, his parents decided to give exercise a try.

Martial Arts Epiphany
At first, the exercise consisted of little more than running around the local junior college track several times a day. Then one evening, while channel surfing, Andre’s father came across a Jackie Chan movie. Andre sat mesmerized for a few minutes and then blurted out, “I want to do that!”

Having no background in martial arts, his father, Kenn Magnum, visited local kung-fu schools. At first, no one would take Andre because he was only three. Eventually wing chun master Richard Loewenhagen met Andre and made an exception. Andre trained in the wing chun program for about a year before his parents left Chandler, Ariz., and moved to Phoenix. Andre’s young age again became a problem when searching for a new kung-fu school. In general, many American kung-fu schools don’t accept students until they are six. Once again, they found a teacher willing to make an exception for their hyperactive son. Master Joseph Eagar of Eagar’s Kung Fu Academy gave Andre an opportunity, and Andre did not disappoint.

Eagar’s patience was endless. He taught Andre northern style shaolin kung-fu as well as modern wushu. Andre enjoyed Eagar’s teaching style and quickly formed a bond with him. Even though the curriculum was demanding and challenged Andre, his need for exercise ensured that he practiced for several hours each day.

Andre seemed to show promise in kung-fu, but Eagar’s school didn’t have a ranking system in belts, sashes or any other titles to designate standing within his program. Nor did the school have other children to compare him to, so his parents had no idea that their son might have some real talent in the Chinese martial arts. They did, however, think he might be more motivated if he had a reason to train hard, so they signed him up for a local martial arts competition. His father worked with him every morning and afternoon and felt that Andre was ready. They were still pleasantly surprised when he won first place. Andre was exhilarated by the entire experience and wanted to compete more. 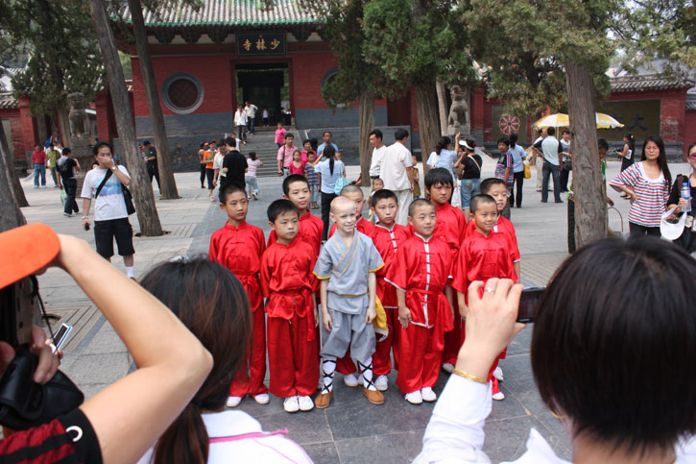 Talent Comes Through
Eagar began to work with Andre individually as he trained and competed in larger, regional competitions. Andre continued to rack up win after win, and it became obvious that he displayed some genuine talent.

When Andre turned five, Eagar allowed him to join the adult demo team. Andre took the stage during the Chinese New Year celebration, other cultural events and even movie openings. Kung-fu began to dominate the family’s time and thoughts, but it was Eagar’s many stories of legendary kung-fu masters and exotic tales of Chinese history that fueled Magnum family’s interest in China. So when they met a performing shaolin monk at a show in Phoenix, and he invited Andre to train in China, they were receptive. It was decided that Andre would travel to the official school of the Shaolin Temple, Tagou, and that he would stay and train for three months. At only six, Andre was the youngest Westerner to ever train there, and nobody knew for sure how well he would do. Adding to uncertainty, Andre’s mother was unable to arrange a leave from work; so Andre and his father went without her.

Even though the family had been reading about China, they hadn’t actually learned to speak Chinese. Additionally, the rural Chinese lifestyle was much different than the high-rise condo in Phoenix they called home. The Tagou staff did its best to make it comfortable for Andre; in fact, at first, they made it too comfortable. Andre’s first instructor treated Andre as if he was at a summer camp, and Andre found the training easy and boring. The separation from his mother began to take its toll, and the boy began to emotionally regress. After two weeks, depression overtook him as he would come from class and sit in the hotel room curled up, sucking his thumb. His father did his best to cheer him up, but finally decided that Andre was still too young for the experience and made plans to return to the United States the next week. However, Andre was already scheduled to compete in a local kung-fu competition, so they decided to compete before returning to the U.S.

Rude Awakening
The day of the competition arrived and a school representative took them to the staging area. It was unlike any kung-fu competition they had ever seen. There were thousands of competitors and tens of thousands of spectators. While waiting to compete, the press found them and began to ask questions in Chinese. One of them knew a little English and began to translate. They both answered questions for what seemed like hours before Andre’s time came to compete. When Andre went on stage, he showed no apprehension and performed flawlessly. The crowd of thousands stood and roared its approval. Andre beamed as be bowed to the judges and the sadness disappeared. They spent the weekend touring local temples and historical sites; however the competition had brought Andre’s back hunger for kung-fu. His cheerful demeanor returned, and he began playing with other children. The competition completely turned him around, and he was not about to leave now.

The easy of Andre’s training was still frustrating him, he complained that he was being treated like a baby and wanted to be taken more serious. The school agreed to provide him with a new, more serious instructor. If Andre had known in advance who would replace his instructor, he probably would have never complained. His new instructor was master Li Jie, who was known for two things: first, being the most aggressive fighter at the school and second, his lack of patience. He wasn’t particularly fond of children either. Li Jie had a stern demeanor, a disciplined style, and a demand for perfection, but Andre thrived on his fast pace and aggressive shaolin kung fu. Kung-fu wasn’t the only thing Li Jie demanded of Andre; he also expected Andre to understand him, even when he spoke Chinese. So Li Jie began to teach Andre Chinese as well. Even with his new instructor demanding every ounce of Andre’s energy, he still managed to spend the evenings playing basketball with the Chinese tourists who visited shaolin. When he was in public at the temple, large crowds asked him to perform. They also wanted him to pose with them for pictures.

Andre was always happy to do so; but one weekend the crowds had grown so large and unrelenting that as much as Andre loved to perform, he became too tired to continue. To avoid the crowds of tourists, he and his father left the main road and climbed through the forest to get to a local restaurant without being seen. 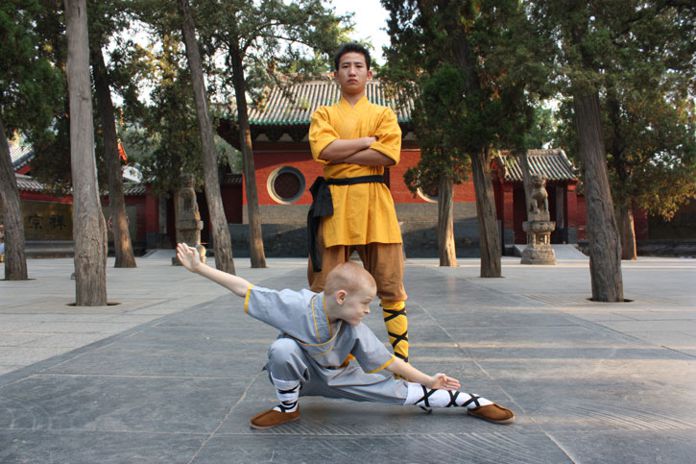 The three months quickly came to an end and they finally returned to the United States. There was a competition in Las Vegas, scheduled the same weekend that they returned and Andre was excited to have the opportunity to show off his new skills. Neither Andre nor his parents expected he would now face any difficult challengers. To their surprise, as the competitors began to assemble, a muscular Chinese man stepped from the crowd dressed in shaolin robes. His stride reflected the confidence of a man who was the real deal. And walking next to him, wearing the same robes and serious expression was a young boy Andre’s age. Whispers circulated through the auditorium that the man had come from shaolin nd he had opened a local school. The boy with him was not only his most talented student, but also his son. Andre was excited by the prospect of competing against someone who could relate to all that he had been through. The competition went well, with Andre taking first in traditional forms and second to the other shaolin-trained boy in long weapons.

Since then Andre has returned to his home in Arizona and to Eagar. As he travels and competes, he has attracted the attention of other kung-fu masters from around the United States who have taken an interest in him and help to train him while visiting their towns. East Coast masters such as Clarence Burris and Lu Xiaoling train Andre when he travels to the area to compete. West Coast schools such as master Patti Li’s Wushu West and China’s master He Jing De have also helped train Andre when he’s visits their areas. Even other kung-fu masters in Andre’s hometown of Phoenix have taken an interest and generously given their time and friendship too Andre. Both master Jinheng Li and master Kenney Perez have spent time training the young kung-fu champion.

Andre still maintains a busy, three times a day, training schedule, so he is home schooled by Samantha O-Yang, a teacher from Taiwan whose credentials include a master’s in linguistics. He also receives coaching in gymnastics from Juan Fernandez of Ultimate Gymnastics.

Each year, Andre and his father return to shaolin where they live and train for the summer. Though he continues to train in kung-fu, Andre’s dream is to one day become a robotics engineer. Given the drive he’s already displayed should probably expect excellent kung-fu robots in our future.

Nicholas Nguyen is a history teacher, avid explorer of Asia, and a martial artist. He often guest lectures at universities on “The History of Pedagogy in Various World Cultures.”

From Inside Kunbg Fu Magazine.