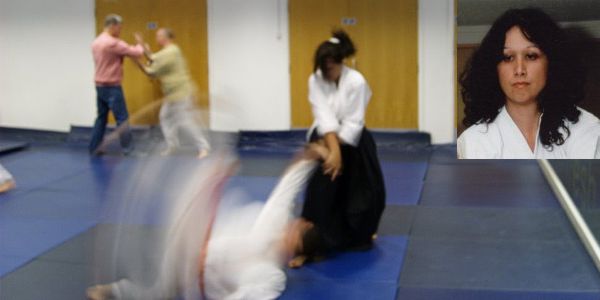 I was born in West London in 1963, my father was very involved in the martial arts and a dan grade in Karate he was also a dealer in ancient Japanese arms and armor, although my father has an antiques shop in London’s Bond Street, my home was more like a samurai warriors dressing room, with original suits of Japanese armour complete with very frighting face masks that would frighten the life out of my friends when ever they came to visit, there were also very many valuable swords yari and naginata spears.

Anita Wilson Aikido: The Masters
My father would travel around the world searching for the best quality weapons, what intrigued me the most as a child was all these strange visitors that would come to my home, the famous Otani family were regular visitors with Sensei Matsuro Otani 7th dan Judo the UK National Coach, Kenshiro Abbe Sensei, Tomio Otani Sensei the UK National Coach for Kendo, his visitors were like the who’s who of martial arts, as recently as two weeks ago I was pleased to meet with Sensei Kazuo Chiba 8th dan when he came to see my father.

Anita Wilson Aikido: Introduction to Aikido
As a child I did a little Karate with my father but nothing serious until 1992 when I went to the local Aikido dojo in Bracknell, Berkshire, UK. All those years with my father and his Japanese weapons must have had a latent but profound effect on me, as I watched Sensei Ellis teaching his Positive Style of Traditional Aikido I knew there and then that this was the martial art for me.

Anita Wilson Aikido: The Hard Training Begins
When I started Aikido I made a point of training with the men and they treated me as one of them. With regular practice I progressed. I had now developed the hard training bug and started courses in physical training and amateur weight lifting, after a few years of hard work I became a fully qualified fitness instructor-personal trainer and amateur weight lifting coach, the high light of all this effort was when Sensei Ellis promoted me to assistant coach of the Ellis Schools of Traditional Aikido (ESTA) two years later he promoted me to first lady assistant to himself, there had never ever been a lady assistant in all the long history of the ESTA, Sensei put me on a three month trial and 8 year on I am still here.

In 1994 I received my coaching certificate from the British Aikido Board (BAB) which is the governing body for Aikido in the UK. Once I became assistant to Sensei Ellis I became involved in assisting in teaching both men and women and also helping with the children’s classes. 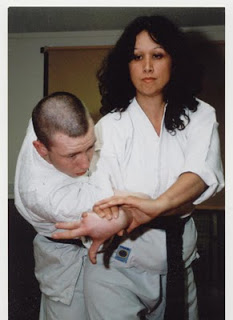 Sensei Ellis asked if I would like to take part in a very large and important seminar in Liverpool in the North of England, Sensei Ellis is not one of those teachers who has a pet uke follow him around to fly all over the mat at a touch or a glance, he prefers to try to involve all the students who attend his seminars if possible, knowing this I felt very privileged but nervous when Sensei told me there would be about 700 students from various martial arts, I think the phrase “Being thrown in at the deep end” is applicable here.

On arrival at the venue I was amazed to see so many students from so many countries, UK-France-Germany-Italy-India-Austria are just some that I can recall. Sensei Ellis was asked to take the first class of approximately 50 dan grades from various martial arts. Sensei had me demonstrate 100 press-ups on the backs of my wrists with fingers pointing both inwards and outwards. When I had finished and was in the raised position Sensei sat on my back (he did not warn me of this) and carried on with his lecture. Sensei suggested that those who wanted to should try this exercise. It was amazing to see all these black belts struggling. Later I had a little crowd around me wanting to inspect my wrists, I explained that this exercise is standard for both seniors and juniors in our schools.

I was now feeling a little more confident when Sensei pointed out that there were six young dan grades who had arrived late and were respectfully waiting for permission to come onto the mat. Sensei asked me to show them what we had been teaching so far, they were all wearing black gi’s and when I approached and invited them on the mat, they scowled as if to say “hey, we have not traveled all the way from London to be taught by a women” as I showed the first technique “nikkyo” a wrist locking action, the first guy tried to resist me, I applied the technique as shown to me so many times by Sensei and almost put him through the mat. I thought he would be upset with me, but as he got up he asked “How did you do that?”. He then wanted me to do the technique on all the others, now I had their attention and they were a great bunch of guy’s. I really enjoyed teaching them. At the end of the seminar, as we were leaving the hall to head for the car park, these six guy’s were waiting in a line and bowed to me simultaneously with a smile and said to Sensei Ellis ” You have a strong lady assistant there ,sensei” Sensei replied ” That is why she is my assistant”. That was my first seminar and one that I will never forget.

I have been involved in many other seminars with my Sensei and they were always good, but I was never so overawed as I was at my first one, or so I thought. Then Sensei Ellis asked if I would like to visit New Mexico in the USA for a seminar. The seminar was to be held in Alamogordo NM, where Sensei’s USA representative in the US lives and works at the Space Museum. Sensei visits New Mexico every year and we have another Ellis dan grade in Texas, Al Montemar. I had always wanted to visit the US and jumped at the opportunity. We made the trip into a vacation for friends and family. We taught members of the USAF and German Air Force at Holloman AFB, which included a guided tour of the base and various fighter aircraft, including the Stealth bomber. Sensei Rogers is an instructor who teaches students from the USAF, Highway Patrol, police and some members of the United States Marshals.

While in the US, I also visited the Grand Canyon and Phoenix. I intend to move to Phoenix to live within the next two to three years. Sensei Ellis has a book on aikido coming out next spring in the US titled “Positive Aikido” which I am pleased to be featured in, Sensei Rogers is a journalist by profession and has worked on this book for the past two years and it will be published in the US. There are several publishers interested in the book so we are all very excited about this latest project. I hope to be visiting the US again next year and I hope to be there for the launching of the book.

For the martial artists out there I would like to add one more comment about the proposed book. Where as most Aikido books spend a great deal of time harmonizing with the planets and the universe, there will be none of that in this book, Sensei always tells students to come out of the clouds and get back on the tatami because “This is where it all happens” and he also often says ” leave the dancing to Fred Astair” (who is Fred Astair?).