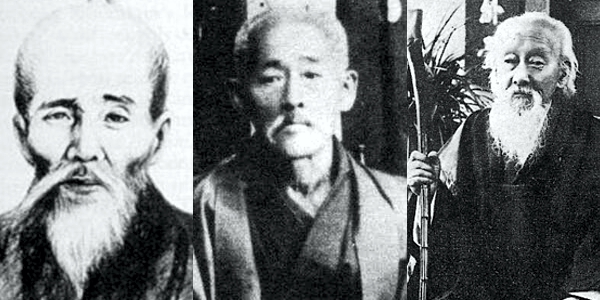 This is the first of a series of articles that I will write covering O-Sensei’s (Chitose Tsuyoshi’s) martial arts instructors. When I initially considered writing an article, I thought I would write a biography of O-Sensei. This is a good idea, such a good idea in fact that it has been done again and again over the years. When I started looking for information, I found at least 5 biographies of O-Sensei and decided that another one by me probably wouldn’t improve the quality of O-Sensei biographies. So… that was that.

I didn’t take me long to find that in general, very little is written about the people who taught O-Sensei his karate. Even what is written about these renowned masters rarely covers Chito-Ryu. I decided to start at the beginning, with O-Sensei’s very first teacher, Aragaki Ou.

Please note that I’m using the Asian convention for personal names, that is, the family name comes first, given names come last (Delaney Michael for example). Also note that I use the term Tote instead of Karate. When O-Sensei began training in martial arts, the word Karate had barely been invented yet and Tote was the common term in Okinawa. “Tote” literally means “China-hand” and refers to any martial art passed from China to Okinawa, and more commonly refers to an eclectic blend of many Chinese styles.

Aragaki Ou is probably what O-Sensei originally called his first master when he trained with him between the years 1905 and 1913/14. The term “Ou” simply means “old man”, which is a term of respect in Japan and Okinawa.

Aragaki had several nicknames, including Aragaki Maaya (Aragaki the cat), which is his most common name in Okinawa, even today. He was also known by the name Aragaki Kamadeunchu (“kama-de” means “sickle hands” and “unchu” was the name of a kata he was famous for, sometimes called Unsu or Unshu today).

His real name was Aragaki Seisho, and he was born in 1840. O-Sensei stated that he died in May of 1918*, although some history books will quote a death date of 1920. Very little is actually known about this man, even his place of birth is in question. He was born either in Kumemura village, Okinawa, or on the nearby island of Sesoku. No photos or film of him are available but since he died in 1918 and photography and film were possible at the time, there is a small chance someone will discover these in the future. The only known likeness of him is in the sketch shown below. This is a drawing of Aragaki, or, more likely, a relative who closely resembled him.

Aragaki held the title of “Chikudon Peichin”, a title conferred upon commoners who were officials of the royal court in Okinawa, similar to a Samurai rank in Japan. He was fluent in Chinese and acted as an interpreter for the court. He was even petitioned to travel to China for his interpretive duties; there is a record of him being petitioned to go to Beijing in September of 1870. This interrupted his instruction of a young Higashionna Kanryo, himself becoming very famous for Tote (China Hand or Karate) instruction some years later.

It is well known that Aragaki was highly sought after for Tote instruction near the end of his life, and was definitely one of the primary Tote instructors of the 19th century. Some of his other students included Higashionna Kanryo (mentioned above and teacher to Miyagi Chojun, the Goju-Ryu founder), Funakoshi Gichin (Shotokan founder), Mabuni Kenwa (Shito-Ryu founder) and Uechi Kanbum (Uechi-Ryu founder). These renowned karateka sought Aragaki for training, though none of them regarded him as their primary teacher.

Aragaki was a stern taskmaster, and training under him was quite difficult. In a time when training consisted almost entirely of kata, O-Sensei was taught only one kata, Seisan, for his first seven years of training. O-Sensei always attributed the idea for the name Chito-Ryu to Aragaki because during a conversation they once had, Aragaki said that Tote had it’s inception 1000 years ago in China during the T’ang (To) era. In Japan, the word “To” signified things Chinese, and Chito-Ryu means 1000 year, China style.

In Chito-Ryu, several of our katas still carry pieces of what Aragaki taught to O-Sensei, including Shihohai, Niseishi, Seisan and Sanchin. All of the kata were modified by O-Sensei into their current forms or were influenced by other instructors during O-Sensei’s subsequent training. Some are now significantly different from their original versions.

Aragaki’s Tote was developed from teachings of Chinese martial arts masters. It’s unknown exactly what school of gungfu he trained in, but historians generally say that he probably trained and taught Monk Fist gungfu (Arhat Boxing). The only Chinese master mentioned in association with Aragaki is someone by the name of Wai Xinxian (or Wai Shinzan), a famous gungfu master in Fuzhou, a city in Fukien province, China, although there were probably others.

Not only was he a renowned Tote expert, but Aragaki was also a superb weapons master, leaving behind several bo and sai kata including Aragaki-no-kun, Aragaki-no-sai and Sesoku-no-kun which has about 200 techniques used against the sword. Aragaki’s weapons katas are thought to be long and beautiful.

Aragaki has many family members still practicing karate in Okinawa today, but his descendants are primarily associated with Goju-Ryu, a style with roots similar to Aragaki’s Tote. Despite his fame as a Tote master, and his many descendants, Aragaki left no style behind. All that remains of this famous master’s legacy are techniques and kata scattered throughout a number of modern karate and kobujutsu styles.

Very little documentation about Tote has been preserved from the 19th century, but there is one written record (a program schedule) of Aragaki Seisho performing weapons and Tote demonstrations for a Chinese ambassador to Okinawa in Shuri City (Okinawan Capital) on March 24th, 1867. Aragaki demonstrated weapons, pre-arranged sparring and the kata Seisan. This says a lot for Aragaki’s stature as a Tote master, as this was an age of Tote giants. Itosu Anko, Azato Anko and the most famous Tote master of all time, “Bushi” Matsumura were all active and very well known, yet, for whatever reasons, it was Aragaki Seisho performing a Tote demonstration for an important foreign guest. We are fortunate to have such a master in our history.

* This has been changed from October 18th, 1918 as originally published.

USAdojo - September 4, 2012
We use cookies to ensure that we give you the best experience on our website. If you continue to use this site we will assume that you are happy with it.OkRead more