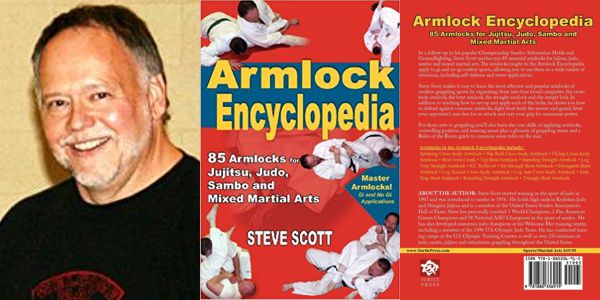 This is my most comprehensive book yet on the subject of armlocks. There are dozens of armlocks in this book! Some are well-known and popular, while others may be new to you. Either way, every armlock in this book (and there are a lot of them) is there because it has worked on somebody somewhere at sometime. I am very proud of this book and sincerly believe it can, and will, be used as a reference and source of solid, practical information on the subject of armlocks for years to come. It’s for anyone, whether you do do jujitsu, mixed martial arts, judo, sambo or any martial art and want to learn about armlocks. Honestly, there are some really cool moves in this book and if you want to know more about making somebody tap out from an armlock, you’ll like this book! ~ Steve Scott

In a follow-up to his popular Championship Sambo: Submission Holds and Groundfighting, Steve Scott teaches you 85 essential armlocks for jujitsu, judo, sambo and mixed martial arts. The armlocks taught in the Armlock Encyclopedia apply to gi and no-gi combat sports, allowing you to use them in a wide variety of situations, including self-defense and street applications.

Steve Scott makes it easy to learn the most effective and popular armlocks of modern grappling sports by organizing them into four broad categories: the cross-body armlock, the bent armlock, the straight armlock and the armpit lock. In addition to teaching how to set-up and apply each of the locks, he shows you how to defend against common armlocks, fight from both the mount and guard, lever your opponents arm free for an attack and vary your grip for maximum power.

For those new to grappling, you’ll also learn the core skills of applying armlocks, controlling position, and training smart plus a glossary of grappling terms and a Rules of the Room guide to common sense rules on the mat.

Armlocks in the Armlock Encyclopedia include:

Dane Harden - May 1, 2013
We use cookies to ensure that we give you the best experience on our website. If you continue to use this site we will assume that you are happy with it.OkRead more