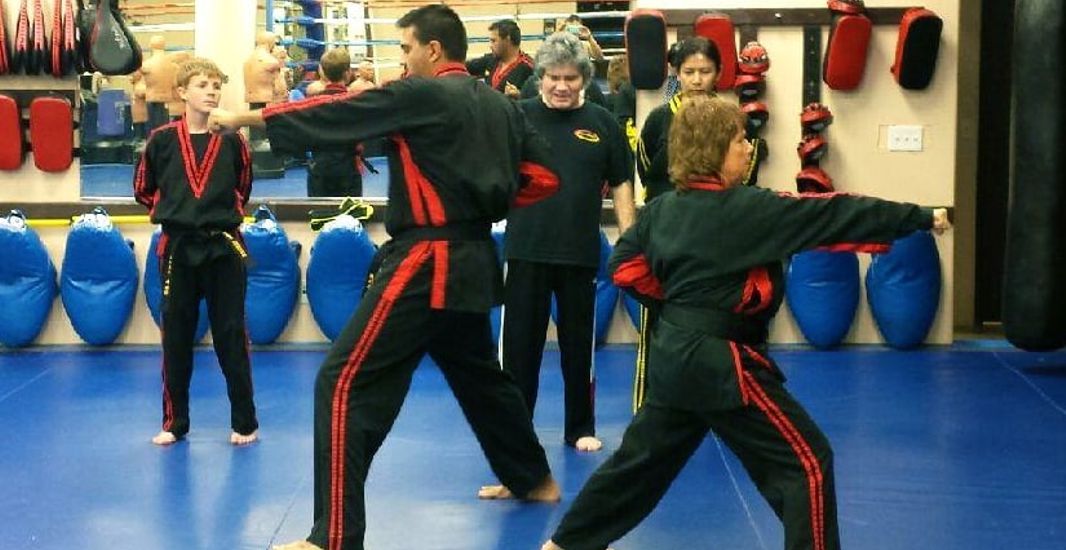 Tae Kwon Do Grand Master Bob Chaney may be one of the best-schooled individuals in the martial arts today.  His over all knowledge of the arts is second to none and his skill as a trainer lays the foundation from which champions are forged.

In the 60’s and 70’s Chaney was one of the sports leading competitors, his mentor and teacher was Korean Grand Master IL Joo Kim. A tough kid from the streets, Chaney was no stranger to fighting; this fearless aggression combined with his undaunted desire to be the best frequently landed the youthful Chaney in the winners circle.

In addition to his Taekwon do training, Grand Master Chaney crossed trained in Muay Thai.  Although he was already an experienced American kick boxer Chaney wanted to expand is knowledge of the sport. In 1993 he packed his bags and moved to Bangkok Thailand where he trained at the Sasiprapha gym under two of the sport’s most famous trainers, Chanai Pongsupa and his son Thakoon.

After years of schooling and traditional training at the Sasiprapa Muay Thai Gym Grand Master Chaney brought that knowledge back to the United States where he became a driving force behind the growing sport of American Kickboxing and Muay Thai.

For more than 40 years Grand Master Chaney has been a martial arts learning machine and in the process has forged both skill and knowledge. Besides his innate understanding of technique, Bob Chaney applies the science of physics to fighting to obtain maximum results as a fighter.

“Martial arts techniques must pass the scrutiny of sciences, physics and mechanics or we open the gateway for the invasion of spiritualism and ignorance,” says Grand Master Chaney. “I learned the martial arts from some of the best teachers in the world, however it was a scientist who helped me bridge the art of fighting and science.

Jack Bowyer was a mechanical, electrical engineer and physicist working for the Department of the Navy during the 70’s. He was a key player in the development of the guidance systems for Americans nuclear submarines.

“Jack was also a member of the team that put our first man on the moon,” Grand Master Chaney added. “He worked on the trajectory and timing of the rocket separations necessary to achieve clearance from the earth’s atmosphere.”

Chaney’s friendship with Bowyer proved to him that you don’t have to be a rocket scientist to train in the martial arts, but it helps. Always eager to learn and innovate, Grand Master Chaney quickly discovered that the merging of science and martial arts was the ultimate training tool.

“Jack explained the three physical conditions that determine how much damage is caused by two physical elements coming into contact,” Grand Master Chaney explained. “They are weight, velocity, and time in contact.”

When Grand Master Chaney combined these three principles with his training expertise he was quick to discover that it enhanced a fighter’s power, speed, and overall performance.  However the lessons of science aren’t always easily grasped, and it sometimes takes considerable effort for the application of weight, velocity and time in contact to be understood.

“Many martial artists have trouble understanding this concept,” explained Grand Master Chaney. “They feel that the more depth of the punch or kick the greater the power. The truth of the matter is if you overextend your attack it lessens your power and weakens your defense.”

Grand Master Chaney says the difference between punching something and pushing it depends upon how much time you allow your punch or kick to extend into the target. The Muay Thai and Taekwon do expert also proclaims that many fighters open themselves up for an attack because they don’t understand the scientific concept that allows them to get the most bang for their buck without exposing themselves for a counter attack.

“Fighters are most vulnerable when they’re hitting,” says Grand Master Chaney. “Most fighters extend their punch beyond their center of power, they’re reaching out to make contact. Also, when a persons hands and arms are extended they’re wide open for a counter.  They can’t cover up in the amount of time it takes for their opponent to hit back. But when you’re close to the target it’s very difficult for someone to counter because your punches aren’t overextended. You should never punch more than six inches away from your body.  Don’t extend the technique. That turns your punch into a push.  Keep it short and powerful.”

Just like 2 + 2 equals 4, the theory behind weight and velocity is the martial arts equals bone breaking power. In addition to giving the practitioner the edge in power, these principles are the very foundation behind the art of breaking.

“Another way to visualize the proper use of weight and velocity is to think of someone trying to break a board by tossing it in the air then hitting it,” explains Grand Master Chaney. “You can hit the board by extending your arm and it will fly across the room without breaking.  That’s weight. Now you can also throw it up and execute a ‘snapping’ punch and it will break and fall at your feet. That’s velocity. The weight will make the board fly across the room, the velocity will break the board. But you must use both of these scientific principles together in order to produce the desired result.”

Every martial artist has been told from day one to use an opponent’s weight against him or her.  But how many people really know how to apply this scientific principle? Master Chaney has studied this prescript for decades and has refined it for use in traditional karate, jujitsu and Muay Thai.

“The science of weight and velocity isn’t limited to punchers and kickers, says Grand Master Chaney. ”When a grappler, judo or jiu-jitsu player extends his arms he too is at his most vulnerable. Outstretched arms invite armbars, joint locks and takedowns. Conversely when the grappler can keep his arms bent, and inside his or her center of power they are least likely to be open to a counter attack.”

Grand Master Chaney went on to define velocity in this manner. “If I threw a 22-caliber bullet at your forehead it wouldn’t hurt very much. And if I used a slingshot it wouldn’t kill you but it would cause considerable discomfort. However if I fired that bullet out of a rifle sending it through the air at 2,200 feet per second that same projectile would be deadly. Velocity increases the weight of an object.”

“When you see a guy get hit and the punch drives him back across the ring into the ropes, if he goes down, he generally gets back up,” explains Grand Master Chaney. “The reason for that is because he was pushed more than punched. The ones who don’t get up are the fighters whose body doesn’t move, but his head snaps and he goes down. That’s the science of velocity.”

The third scientific principle in this scenario is time in contact. This factor focuses the energy to a specific area long enough for the energy to be absorbed.

“Hitting something at anything less than a 90-degree angle results in a glancing blow diminishing the focus and lessening the damage,” Grand Master Chaney explains. “By contrast, too much time in contact creates a diminishing return situation.”

“The ability to maximize your time in contact without going into the diminishing return stage can be achieved through repetition,” Grand Master Chaney says. “Punching as hard as possible then returning your hand as quickly as possible to the defensive position gives the punch the proper amount of time to be effective. However if you leave your hand extended that results in a diminishing return.”

Another very important equasion to this scientific approach to knocking the stuffing out of one’s opponent is knowing how to close the gap and knowing at what interval a punch should be thrown for maximum effectiveness.

“The most effective way to punch is to keep your elbows inside of your body,” says Grand Master Chaney. “If you want to load up a punch, curve the body because you can’t load the arm up.  The body loads up the weight, not your arm. If I’m jammed up against another guy’s body I can’t get enough velocity to fire off an effective punch. As I move back I increase my velocity.  But if I back so far as to put my elbow goes past the body then I am diminishing my velocity. The perfect distance for a punch is when your elbow is just passing your body, before that and after that you’re losing power.”

Grand Master Chaney further detailed the “science” of fighting as he detailed the proper use of the body’s muscle group to work in harmony with his weight, velocity and time in contact theory.

“Since the large muscle groups of the body create much more power than the arms or the legs, a fighter should focus on developing extreme body motion and limiting the amount of leg or arm usage,” Grand Master Chaney explained. “The arm or leg is used to minimized or maximize the time in contact. However if your intent is full power you must increase and maximize the time in contact to but not beyond the point of diminishing return.”

Grand Master Chaney went on to say that whether you’re using a punch, elbow, or kicking with the foot or shin, the objective is to utilize and maximize your weight, velocity, time in contact, and leverage through correct distancing. If any single element of this formula isn’t used you’re attack will be depleted of it’s potential destructive force.

Grand Master Chaney further stated that each person could increase their power far beyond the weight they have to put behind the punch by using this scientific theory. By using your opponents weight it’s possible to capitalize on their velocity by timing their movements, subsequently using their velocity and momentum against them.

“Let your opponent do all the work,” says Grand Master Chaney. “Catch them in their forward progress and let the principles of science lose on them. That’s why the worst automobile accidents are head on collisions. The combined weights of cars, the combined speeds, and maximum time in contact create the destruction and devastation that not be achieved through the efforts of one moving automobile. That’s how you use your opponents weight and speed against him.”

Standing toe-to-toe with fighters half his age round after round, bout after bout Grand Master Chaney proves on a daily basis that the principles of science when applied to the fighting techniques of the martial arts can be a winning combination.

PPS Kicking and the Balance Paradigm