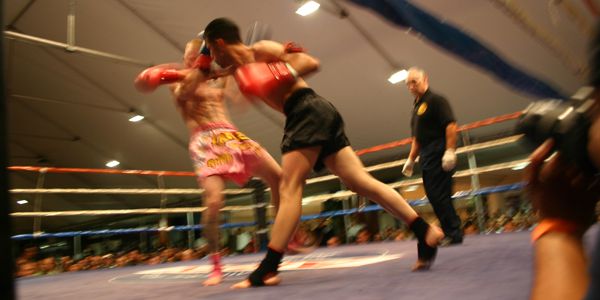 A few months ago I went to Thailand with Bob Chaney to train with him and one of his students at a Muay Thai Camp in Bangkok.  The fighters there were young and in prime condition, and many of them were champions themselves.

At age 57 Chaney is built like a fireplug, you can tell at a glance he’s a fighter, but what amazed me the most was his endurance.  He entered the ring and went non-stop, round-after-round taking on fighter-after-fighter and never got tired.

One-by-one the youthful, hard-bodied Muay Thai fighters fell under Chaney’s skillful kicks and powerful punches.  I watched in awe as Chaney bounced around the ring without so much as taking a deep breath, thinking to myself, “My God, Chaney is really the Energizer Bunny in disguise.” But in fact, that was not the case.  I hadn’t uncovered a secret identity, what I was witness to was the result of a fighter who knew how to train for maximum results.

“The key to getting in shape for a full contact match is recovery time,” Chaney explained.  “What I mean by that is the time it takes to recover from a full out sprint while jogging.  When I’m training a fighter I’ll run with him and after about 3 or 4 miles I’ll say, ‘see that house 70 or 80 yards away?  Hit it!’  He’ll run full out and blitz back, and were still jogging.  He’s dying he’s so out of breath, but I’m fine.  It takes him about a minute to recover, and now he’s jogging and talking with me just like before.  Then I’ll send him out on another sprint and we continue to repeat the process.  Now three weeks later we’re at it again and this same guy is just as tired when he comes back from the sprint because running all out is running all out.  The difference is his recovery time.  Now it’s down to about 40 seconds, eventually it will get down to 20 seconds.  So in a fight, the pro fighter will be able fight at various levels of intensity.  A fighter should never go so hard and so long to where he is totally out of gas.  Because if you’re on empty and can’t defend yourself or have the energy to hold onto your opponent in order to buy some recovery time, you’re going to get beat on and probably lose the fight.  So it’s important to know your recovery time and stay within that energy level.”

In addition to his jog and wind sprint workout Chaney says you’ve got to learn to listen to your body.  It will tell you when you’re pushing too hard.

“You don’t want to do damage to your body,” Chaney said.  “If you get tired, rest.  You don’t want to train so hard that you can’t walk for two or three days.  You want to start out slowly, and increase the workout gradually. I’m 57 and I love to get in there and spar with all of my fighters, but if I do that I’ll be sore for three days, so I don’t do that.”

Chaney explains that when he is in the ring, as in Thailand, his opponents are probably in better shape than he is, but Chaney knows how to relax and how to fight smart.  He says the only thing that can really prepare a fighter for a full contact bout is to know what it’s like to get wailed upon by another fighter whose going all out.

“What I do to get my fighters prepared for a hard fight is to put two chest protectors on them and not allow any face contact and let em’ go all out,” Chaney said.  “They start beating and kicking each other and pretty soon their form goes out the window, they’re swinging wild and begin to run out of gas.  Now they’re duplicating what will happen in a real fight.  They start pushing on each other, they lean on the other guys body trying to catch some wind, and they’re getting sloppy with their techniques because they’re exhausted.  But a fighter needs to go there.  He needs to go to the point where you can’t raise your hands or throw another kick.  Once you’re that tired you start to fight smart.  You shorten your moves and find the most efficient way to land your techniques without wasting energy.  Then a fighter learns when to turn it on, and when to slow it down.  That’s when they start learning how to fight smart.”

In addition to the jogging wind sprints and the double chest protector workout Chaney has a drill where he sets his ring timer for two-minutes, then he has his fighters jog three times around the gym with a 10 to 15 pound dumbbell in each hand.

“They’ll sprint, then jog, sprint then jog,” exclaimed Chaney.  “The bell rings and they put their gloves on, go to the bag and do two-minutes of non-stop kicking with each leg as fast and hard as they can go.  When the bell rings they get a 15-second rest.  Then they take the 120-pound bag and hit it out away from themselves.  You’ll see them die after about 15 seconds and they still have almost two minutes left to go.  When the bell rings again, they grab the dumbbells and start the sprints once more.  Then it’s back again to the kicking and punching drill.  When that’s over I take them outside and they jog up a nearby hill, sprint back, then kick the Tai pads all out.  At the end of one minute on the pads they go back up the hill sideways, three steps left side, three steps right side.  Then they sprint back down again and start punching on the focus mitts, doing combinations and stepping off.  The reason for stepping off is so that you don’t finish in front of your opponent.  That’s a mistake a lot of fighters make.  When they get tired they don’t want to step off, they just want to stay in front of the pad so I bump em’ and force them to move and punch.  Its one heck of a workout let me tell you.  But it doesn’t compare to what they will face in the ring.”

Many a well conditioned point fighter and grappler has entered Chaney’s studio thinking that he or she is ready to step into the ring for a full contact fight.  Although they are in prime physical shape, Chaney tries to explain to them that there is a big difference between the kind of conditioning they’ve gone through for their particular sport and the kind of conditioning they need for a full contact match.  Often times his advice goes unheeded, that is until they find out for themselves how draining the infamous square circle can be on a person.

“Getting in shape for a full contact fight is far different that training for any other kind of match,” Chaney explains. “I’ve had fighters come to me that have won 20 Tae Kwon Do tournaments and think they’re in good enough shape to fight full contact.  I try to tell them that it’s different once you get in the ring and start trading kicks and punches in a full contact bout or Muay Thai fight.  But they never listen.  So I just wait and by the end of the 1st or 2nd round they are dead.  They don’t want to get off the stool; they can’t raise their arms, let alone kick.  These guys always ask me afterwards, ‘I run 10 miles a day, I skip rope, I spar all the time, how can I be so tired in a three two minute round fight?’   The answer is because they’re doing more cardio workout and kickboxing is anaerobic.  Because of the nervous energy expended by a fighter has already gone the equivalent of 3 rounds before he or she has even entered the ring.”

Chaney knows first hand how these fighters feel.  Once a national champion in point fighting, he went on to become a superb full contact fighter and trainer of champions in full contact karate and Muay Thai.  During that process Chaney has experienced all of the emotions and frustrations that his fighters have or will go through.

“I have been so tired in fights that I’ve seen an opening where I could land a kick on my opponent but was afraid to do so for fear of going into cardiac arrest,” Chaney admitted.  “I knew I could land the technique, and I could hear my corner yelling at me to shoot a kick to his head, but my body was so tired that I could have killed myself by doing it.  Now I knew that I could land the blow, but I was truly afraid that if I did my heart would explode.  So I let my guard down and allowed the guy to hit me three or four times in the face, just to have a few seconds rest.  It was worth getting hit just to be able to rest those few seconds.  And that gave my recovery time to set in.  That’s how tired you get in a full contact fight.  You’re actually willing to take a shot to the kisser just to rest your arms.”

When it comes to weight training, Chaney is a firm believer in using barbells to strengthen the body.

“I’m a firm believer in weight training,” Chaney said.  “I recommend it to all of my serious fighters.    If you do heavy weights the slow responsive muscles tend to take over but if you do low weights and fast reps the smaller and faster reflex muscles will develop.  That will give you a more explosive punch and that’s what you want to develop.  Speed, power, endurance and most of all a short recovery time will equal a victory in the ring every time.”

For more information about Bob Chaney Family Martial Arts visit their listing on the Martial Arts Schools and Businesses Directory by clicking on the image on the left.

Ronnie Colwell - August 29, 2013
We use cookies to ensure that we give you the best experience on our website. If you continue to use this site we will assume that you are happy with it.OkRead more