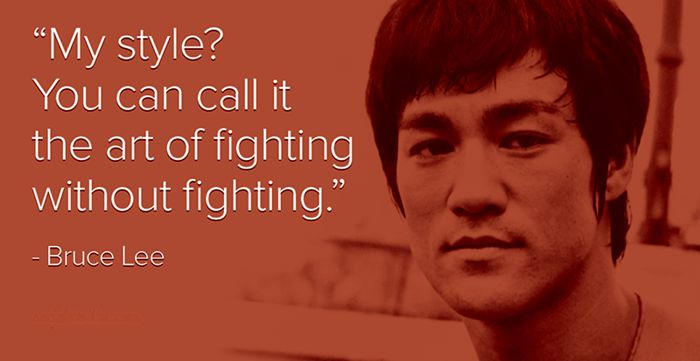 The bully poses the question, “What style are you? “And Bruce responds, “The art of fighting without fighting.” The bully repeats the response like it some ancient Chinese secret, “fighting without fighting” Bruce starts to walk away and then the bully attempts to stop him when Bruce responds, “Don’t waste yourself.” The bully wants to use intimidation; however, Master Bruce has a foil in place to ultimately diffuse this bully and points to an island where there will be more room to fight. Bruce fools his opponent and makes him believe that he is going fight. The man then jumps into a dingy while Bruce stays on the boat holding a line. Knowing all along, he had out smarted and redirected his opponents force without even touching him. This is a remarkable subtle assertion of true personal power without violence; and Lee is unequivocally demonstrating the art of true deception.

Bruce in his wisdom may have wanted this scene to reveal the importance of mental composure with a response that was well thought out. He used his personal power to respond with a well timed resolution which was his own brand of commonsense. Living in reaction to the negative forces which are apparent in our society, also being incognizant of how we may direct our internal force could endanger our existence. Responding to a negative situation with a method in place in everyday life, or with a street criminal can make the difference between life and death. Responding in a crisis is not the same as reacting to one in that: to react is unpreparedness; while responding is applying what has been trained. The manner in which we manage a negative situation will involve training specific mental and physical attributes. A good example of this was seen in the 1970’s television series Kung Fu when “Kwai Chang Caine” avoided the insulting tongue. He developed his will to survive and face death as a Shaolin Priest, evolving and defining his pathway; ultimately moving away from the burgeoning emotional weaknesses which influence ego. I believe that there is an enigma between being a “warrior” and also being a “pacifist”.

The reactionary obliterates their ability to focus while losing control of their temperament. They are in a sense, out of control with their mental thoughts and physical actions. Often when we think of a warrior the image of a seasoned fighter comes into view; however, a hard wired pacifist has total confidence in taking the necessary action to attain a goal or take a strong stance.

Would you ever conceive that the spiritual leader Mahatma Gandhi was a warrior in sheep’s clothing? He was a bone-fide pacifist; however he fought like a warrior with a peaceful yet committed hard line approach, to bring a peaceful solution to India’s social problems during the early to mid 20th century. Gandhi paid the ultimate price when he was gunned down by an obsessive reactionary caught up in political strife. This assassin in his violence could never possibly have realized the overall of effect of his aggression. He was ultimately fueled by aggression and blinded by internal strife without an ability to regulate mental composure.

We know that life is combative and that many problems could be successfully redirected, especially street and road rage violence. It is obvious that we are not going to encounter a violent street situation on a daily basis and yet martial art training for many encompasses that ultimate street fight. The greatest attribute in the human condition is management of other individuals and their unruly emotions: however more profoundly it is our own. Gandhi in a sense applied an indirect attribute of Mental JKD without ever training in any JKD system. He used focus to pinpoint his desired cause which was peace without violence. Acting tough and possessing the ability to be tough, standing up to what life may throw at you presents the hard line imperative, what brings people to the truth of real combat?

The realization of killer instinct is responding to life and death with brute force; however encompassing a mixture, in which manifesting peace and the ability to survive is deeply intertwined. It is the “Enigma” which is defined as puzzling and mysterious, it is extremely difficult to extract a definitive meaning. In JKD, it is called “killer instinct” a method of turning fear into power, possessing the ability to remain in focus and at the same time– unleashing blinding force. I guess it is just the Zen of it, when terms like killer instinct can posses a blend of active and passive forces: waging war to win peace. This is enigma at its best activating a midpoint between violence and peace. The activation of killer instinct on its own can be turned on by the threat of fear, and the very nature of fear itself is something that most people want to avoid.

Fear is a bold face emotion which rears up in all us depending on the circumstance and makes its presence in various ways. When I contemplate fear it is using every part of my being to drive myself to survive in the face of total violence. When asked the question how to deal with fear some martial art instructors might assume their students will just react. They may expect their students to just use a technique without really knowing how to control fear. Facing fear can shut a person down no matter how many self defense techniques they possess. The ability to mold it into focused power equals training under an adrenaline response.

Understanding how to access control over emotions is the combative edge in winning a street fight! It is knowledge put into practical power and directing its use for survival! Fear has many levels and everyone will be wired differently to deal with it. When confronted by a threatening situation fear can be turned into anger if the person who is threatened has trained in the absolute JKD system. That anger mixed with blinding focus can perhaps save their life. It is the ability to change a limiting belief from a disabling emotion—- into pure directed force, believing it can be accomplished.

The one constant approach for my life has been the training in the JKD system and using the physical attribute training, along with what I like to call Mental JKD training too. It is vital to know how to redirect negativity without always using violence. This is true because if violence is the first option used in a negative situation there can be legal battles in the aftermath which could be devastating. It is of the greatest importance to know how to overcome a dangerous street situation or otherwise the intimidation of real bully. The genesis in all of this is “mental power” and having the ability to initiate a controlled response.

Fighting without fighting can be the flip side to actually fighting with fighting. Deliberate, effective, communication is an essential skill which can determine how we deal with others. Master Bruce in street situations with his opponents used his ability to teach even when he was engaged in a street fight. Bruce lee was a master in communication and possessed the best of physical and mental attributes. In reading the Tao of Jeet Kune Do, the Yin and Yang forces of fighting without fighting and fighting with fighting share the same space; just as the symbolic Yin and Yang representation which is Lee’s symbolic signature.

The art of communication is central to the human condition and also in the development of how we direct the main focus of our lives. There has been for many years a thought and speech process which can determine what we pay attention to and how we might derive success. The way that we think and the manner in which we communicate with speech makes the ultimate difference. This is the science called “Neuro Linguistic Programming” and it is the art of communication in connection with our selves and others too. The emergence of NLP as it is known was created by Dr. Richard Bandler in the 1970’s; and emerged, as system of using positive based language and positive mental focus. It was designed to breakthrough old negative thought patterns and develops a new response to positve conditioning.

The core of NLP is based upon what an individual desires to accomplish and how they might break something down into viable pieces to realize a finished goal. NLP is a science worth researching and it where I insert mental JKD and the attribute of congruency; knowing exactly what we want and how we decide to respond to life. The power of response is about knowing what we focus upon and what decisions we make to attain any desirable goal.

I am a Neuro Linguistic Practioner and believe that this science helps anyone to focus on what they want to achieve through mental imaging and direct positive language. In my years being a personal trainer and cardio Jeet Kune do instructor the principles of JKD and NLP have helped me and people that I’ve worked with. It has helped to restore my confidence, furthermore a will to survive. I have also developed a “Cardio JKD system” based on all the principles that have been taught to me over the years. I use street defense in the cardio JKD format; however it is, fighting without fighting too because very often– I am fighting demons within. These are the ones that disable an individual in overcoming their fears. A street fight may not be around the corner every day, so it is important to realize, there might be personal demons, disabling are ability to activate the success mechanism within. The art of JKD training can help anyone looking to improve their overall mental attributes for the purpose of self control, self-defense, and unified connection with a fitness harmony.

The real beauty of this system is in the art of mental control which embraces life through the development of attributes which is the Yin and Yang of it in a nutshell. The fire power of JKD is in a dance called the strait blast, eye jab, knees, elbows, and head butt, which upon entering center line leaves personal demons and the street variety in a place they never should have occupied! Learning how to diffuse the essence of rage is essential to the physical and mental training science of JKD.

The fighting without fighting approach is far superior because redirecting negative emotions– through attribute training, saves lives. This science can be applied to any internally on almost any level and changes fear into focus. Whatever style you may possess the ability to empower your mental focus combined with the development of the physical body is the truth of a combat for a lifetime. This truth is ultimately the enigma of warrior- ism vs. pacifism. The art of human expression and expressing one’s self honestly can be achieved through Bruce Lee’s science of Jeet Kune Do and the focus of Mental JKD.