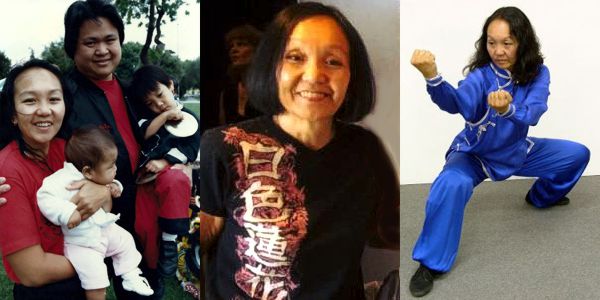 Carrie Ogawa-Wong is a highly respected and energetic mother, wife, martial artist, author, instructor, and competitor. She has managed to balance her heavy schedule to enjoy her love for the martial arts and her family. Carrie was initially involved in ballet, modern dance, and tap. After obtaining her brown belt in Karate, she started to explore the Chinese martial arts. Carrie relocated to Los Angeles, California, to study under Master Douglas L. Wong, a highly recognized international Kung Fu instructor and founder of the modern day White Lotus Kung Fu System.

Soon after studying under Master Wong, she earned a position on the Sil Lum Kung Fu demonstration team. In 1980, she competed nationally and was ranked as the number 2 female competitor in hand and weapon forms competition by the Star Rating System.

After starting a family, Carrie Ogawa-Wong returned to competition in 1991 at Tat Mau Wong’s International Kung-Fu Championship in San Francisco. She competed in the Four Star Championship Competition which is comprised of four separate categories. 1) Long weapon. 2) Short weapon. 3) Hand form. 4) Sparring. Carrie placed fourth in the competition out of over 20 competitors. Majority of the competitors were much younger than her.

Carrie Ogawa-Wong continued to compete and her accomplishments include:

Other interests and accomplishments of Carrie Ogawa-Wong include:

Featured in “Inside Kung Fu” July 1999 issue, “Born to be a Champion” is Carrie Ogawa-Wong and Douglas’s son, Travis Wong. Along with her husband, Douglas L. Wong, Carrie Ogawa Wong has trained:

Currently Carrie Ogawa-Wong instructs the Children’s, Adults, and Taiji classes at the family studio in Northridge, California. Carrie is available for group or private instruction.

USAdojo - August 9, 2011
We use cookies to ensure that we give you the best experience on our website. If you continue to use this site we will assume that you are happy with it.OkRead more