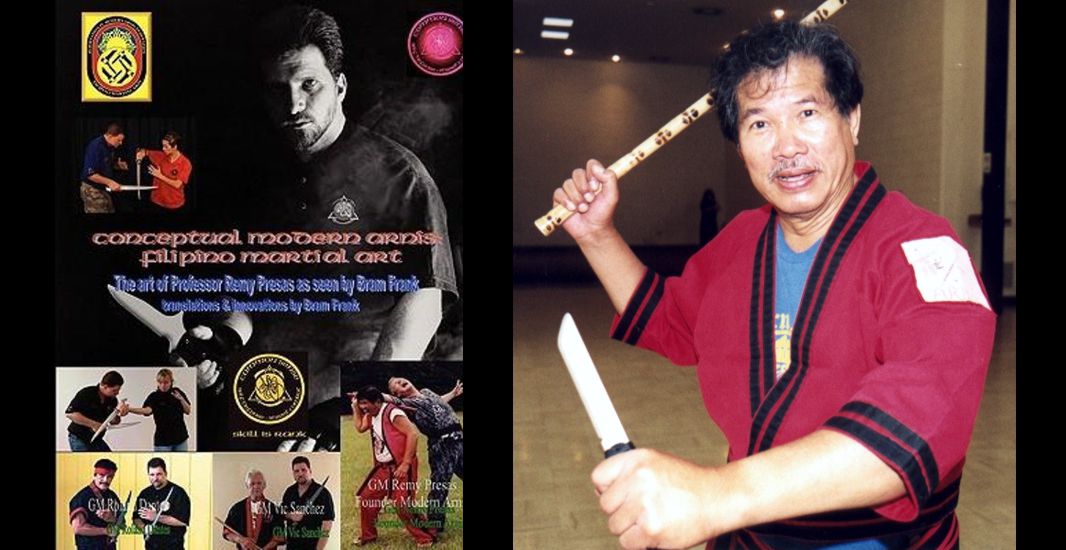 Bram Frank’s book, Conceptual Modern Arnis, is a seldom seen view of Arnis or Modern Arnis, the Filipino fighting art of Professor Remy Pesas, as seen by first generation student, Senior Master Instructor Bram Frank. Modern Arnis is seen through the perspective of the family art of the Bolo and knife, (edged tools) rather than a stick. Some history of Modern Arnis in the USA is also discussed.

So much more than expected!

Considering I had such high hopes for Conceptual Modern Arnis to begin with, that says a lot!

As a long time practitioner and student of the Filipino Martial Arts, I can’t recommend this enough. GM Bram has created a tribute to Professor Remy Presas and his legacy that is sure to become the standard by which other publications are judged.

From the history, to the artwork, explanations, details, movements, techniques- he has captured in print what no other martial art publication has.

Whether new to the arts, a long time student, or an instructor, this book has something for everyone and deserves a place in the library of every warrior who has a sincere interest in Filipino Martial Arts and/or blades & edged tools.

Thank you GM Bram, for sharing so openly!
JW

I wanted to write a detailed review of Conceptual Modern Arnis and as such have spent the last week re-reading in an effort to begin this task. Unfortunately, I have decided I cannot do it justice without a lot more work. There are simply too many nuggets and insights contained within this tome to do a decent job of it. Years ago I picked up one of Remy Presas’s books – didn’t get much out of it and decided there was not too much to Modern Arnis. Now I am regretting that decision. Bram’s book made me take a new look at the art for a second time through my somewhat older and more experienced eyes. This book has been laying on my nightstand table for weeks now as I keep finding myself going back to it for further reflection and education.

Bram Frank’s book Conceptual Modern Arnis has been worth every penny and having purchased just about everything written in English on Eskrima, Arnis and Kali over the years – I can make a meaningful comparison! Buy the book, put the kettle on and settle in for a lengthy and enjoyable read. If you are an Arnis aficionado or just curious about the Filipino Martial Arts in general you would be hard pressed to do better.
Dr. Orr

What Does It Mean To Be A Martial Arts Teacher