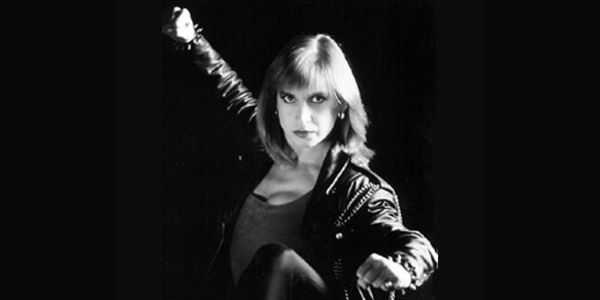 Cynthia Rothrock is one of the greatest martial artist and action film stars in the world, Few other performers can match her presence and energy on the silver screen. She is the undisputed “Queen of Martial Arts films”. 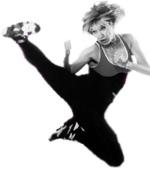 When she was a 13-year-old growing up in Scranton, Pennsylvania, she started taking lessons at her parents best friends private gym. Little did she know at the time that this casual interest would lead to a full-time professional career. Her natural abilities were quickly recognized by her martial arts teachers and they encouraged her to enter open karate competition, By the time she had earned her first Black Belt she was well on her way to becoming a martial arts champion. 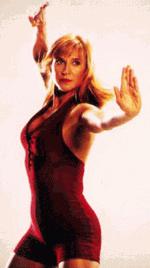 By 1982 Cynthia was one of the premier Kata (forms) and weapon competitors in the United States. Competing in divisions that were not segregated by male-female categories, she literally captured every title in both open and closed karate competition. From 1981-1985 she was the undefeated World Karate Champion in both forms and weapon competition. Establishing a legacy of wins and accumulating hundreds of trophies for her martial arts prowess; a feat that is unparalleled even to this day! She is a consummate performer with such Chinese weapons as the Chinese Double Broad Swords, Staff, Chinese Nine-section Steel Whip Chain, Chinese Iron Fan, and an assortment of Okinawan Kobudo and Japanese Bugei Weapons.

As a Forms and Weapon Champion, Cynthia Rothrock has traveled the world performing the intricacies of her martial arts arsenal. With precision flare and panache she has demonstrated before hundreds of thousands of spectators across the globe. Her “action-packed” self-defense and fight scenario performances garnered her the reputation as a consummate professional in the World of Martial Arts. 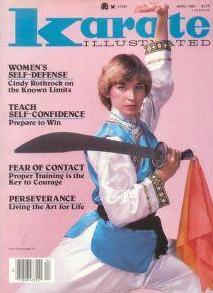 Cynthia Rothrock is also one of the very select individuals to be inducted into the Black Belt Hall of Fame and Inside Kung-Fu Hall of Fame as well as just about every other Hall of Fame in the world. Inclusions in such renowned organizations as the Martial Arts Gallery of Fame, MARTIAL ARTS, Traditions, History, People, The Martial Arts Sourcebook, and dozens of other historical reference books of martial significance.

Cinematically, Cynthia burst onto the scene like a stick of dynamite after “starring” in a Kentucky Fried Chicken commercial in the early 1980s. Soon there after Producers and Directors recognized her martial arts skills and her career began a steady climb upward. Cynthia’s first full length motion picture was Yes, Madam! (1985) also starring Michelle Yeoh. The movie turned out to be a hit and broke all box office records in Hong Kong,

Cynthia and Michelle were launched and on their way to becoming two of the most successful female action stars in the world, Putting it briefly, when Cynthia was invited to Hong Kong to appear in motion pictures, she didn’t know what to expect. She thought they were going to do period pieces where she would have to wear tight pigtails and traditional Chinese costuming. To her surprise she soon thereafter discovered that she would be starring in Chinese action films set in modern times with contemporary themes.

As a result Cynthia Rothrock spent five years in Hong Kong starring in Asian produced motion pictures. In that time she had starred with kung-fu greats Sammo Hung and Biao Yuen. She was even offered a role opposite of Jackie Chan in Armour of Gods (1986) but Jackie got injured so the company put her in Righting Wrongs (1986) (Above the Law) with super star Biao Yuen. During that Asian tenure she set a record of becoming the very first non-Chinese westerner to carry an action movie single-handedly in Hong Kong. In fact, she left Hong Kong as one of the most celebrated action stars in Hong Kong’s cinematic history. 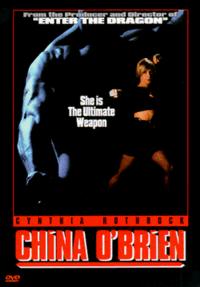 Hong Kong based mega-film producing consortium Golden Harvest Productions (co-producer of Enter the Dragon (1973) starring Bruce Lee with Warner Brothers) decided to try and launch Cynthia’s United States film career with a series of action films called China O’Brien (1990) and China O’Brien 2 (1990). Though not as popular in domestic theaters, these movies went on to become favorites in international videos stores and cable networks. Even today they are among some of the action martial arts aficionado’s all time favorites. Her astounding motion picture career has earned her the indisputable tide throughout the world as “Kung-fu Video Queen”. 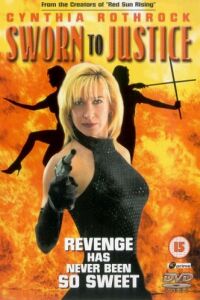 Cynthia Rothrock’s movie career “shooting schedule” has taken her to some of the most exotic locations on the planet. Paradoxically, she has also endured some of the worse climatic conditions that anyone in the motion picture could ever anticipate – all in the name of making “action-adventure” motion pictures.

But, Cynthia is quick to point out that the memories and enjoyment of working with some of the top martial arts directors in the business has all been worth it. Namely; outstanding directors like Robert Clouse (Enter the Dragon starring Bruce Lee), Cory Yuen (No Retreat, No Surrender end many more), Sammo Hung (Shanghai Express and many more), Guy Norris (Rage and Honor II), Kevin Hooks (Irresistible Force, more), Oley Sassone (Fast Getaway II, more), Paul Maslak (Blonde Justice, more), John Schlesinger (Eye for an Eye, more), Brian Todd (Hostage, more). and Fred Williamson (Night Vision, more). 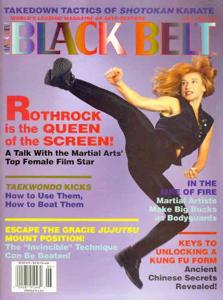 William Groak, an Editor for Black Belt Magazine, once compiled a dossier that perhaps best sums up Cynthia’s action-adventure martial arts film career and work ethic when it comes to the film making process. Simply stated, it reads,

She has had her celebrated moments in the “spot light” as a film personality that has been a true martial artist from the beginning of her film career. Appearing at Arnold Schwarzenegger’s Fitness EXPO ’98 brings back fond memories of Arnold actually singing “Happy Birthday” to her on stage before a packed house that drew 75,000 competitors and spectators for a weekend in Columbus, Ohio in 1998. Much of that same notoriety has been experienced at Film Festivals all over the world in addition to countless hundreds and hundreds of karate and kung-fu tournaments she has attended over the past decade. Being honored at the Crystal Awards (comparable to Hollywood’s Academy Award “Oscars”) had it’s finer moments as well. Cynthia was presented with the Lifetime Achievement Award for popularizing martial arts around the world through the film media.

Publicity has followed Cynthia Rothrock through every stage of her illustrious career. She is the “media darling” of virtually every reporter, writer, and martial arts magazine in the world. They know that she draws readers by the thousands to their publication. In fact, her “image” and “career” is perhaps followed more closely (by martial arts enthusiast) than any other “martial arts” actors except Chuck Norris or Jackie Chan.

Many of these are due to the “love” for the martial arts and the “seminars” she conducts to share her knowledge and “experiences” with serious martial artists that wish to make “film” and “performing” their careers. She has had a profound impact on thousands of kids and adults alike who are trying to break into the “action-adventure martial arts” film industry. Eric Lee (Legends of the Millennium Chairman of the Board) and herself travel and co-op “seminars” that teach almost every aspect of the martial arts and film business, Teaching action-film stunt fighting, choreography, self-defense, camera angles, acting, winning with world class championship kata (forms) – both empty-hand and weapons, chi gung, understanding the film making process, longevity exercises, etc. are among a few of the various courses that one can expect to learn at these exciting teaching/training seminars.

As a Corporate Board Member of LEGENDS of the MILLENIUM Corporation, Cynthia directs, advises, and brings with her the experience of a lifetime of involvement in the martial arts. This, combined with her celebrity status as a major film star within the genre of action-adventure martial arts motion pictures enables her to direct the Corporations “public Relations” endeavors like no one else in the martial arts “theme-restaurant” business.

USAdojo - August 15, 2000
We use cookies to ensure that we give you the best experience on our website. If you continue to use this site we will assume that you are happy with it.OkRead more