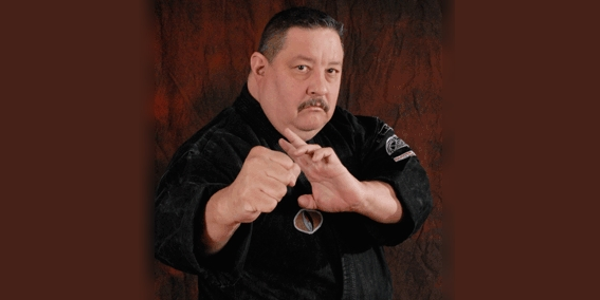 Mr. Frank Trejo’s first experience with fighting began at the age of 8, when he started boxing with the instruction of his grandfather.

His formal martial arts training began with Shotokan Karate in 1966. Three years later he met and started training with the legendary Ed Parker. In the incredible years that followed, Mr. Trejo was privileged to many of the concepts and precepts that Mr. Parker created and devised. Demonstrations, seminars and world tours with Mr. Parker were to follow. 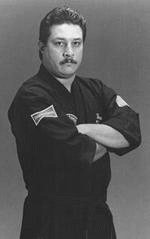 As an amateur Kickboxer his record was 14-0. As a Professional Kickboxer, his record was 21-1. He went on to win the California State Kickboxing Title in 1979. He is also an amazing 19 Time International Champion and the first and only Kenpo man to hold the distinction of Placing 1st in both Kata and Kumite at the Long Beach International Karate Championships. This feat was accomplished in 1984.

In 1985 the Corporate World recognized his talent and made him the Coach and Captain of the Budweiser International Karate Team. Read about them in the Black Belt magazine articles. Throughout his career, he has captured over 400 championships.

Frank Trejo is known the world over for his unique fighting abilities. He has crossed all boundaries by combining Boxing, Kickboxing, Karate, Judo and Ground Fighting in a concept he likes to call “Kenpo Fusion”.

Although now retired from competition, Mr. Trejo continues to offer his unique instructional techniques in seminars the world over. He has been invited to many countries including: Ireland, Spain, Australia, South and Central America, Japan as well as continuing his work in the United States. Mr. Trejo also continues to train amateurs and professionals for competition in Karate, Boxing and Kickboxing.

In 1985, he began a program called, “Creative Physical Fitness”. That program changed the lives of many physically, mentally and socially challenged children with the incredible benefits of the Martial Arts. His unique program has been recognized by many national and local television and news organizations. In addition, this program was the first and only one of its kind to be recognized by Los Angeles County School District as an “Exemplary Program for Education”.

He also works as a stunt coordinator and as an actor. Mr. Trejo has instructed or been a bodyguard for Van Halen, Jean Claude Van Damme, Lauren Tewes, Billy Idol, David Lee Roth just to name a few. His films include; Pushed To the Limit, Beyond Fear, Personal Vendetta, Painless George, and Deadly Outbreak.

His hobbies include singing and playing guitar and percussion in various blues bands. His professional interests include new television projects such as: Pro Tae Kwon Do, the Challenge of the Masters and others.

He is currently ranked as a 10th Deg. Black Belt in American Kenpo. His work with Mr. Parker is still being featured on the magazines: refer to the August 2001 issue of Black Belt, it has a picture of him and Mr. Parker working together.