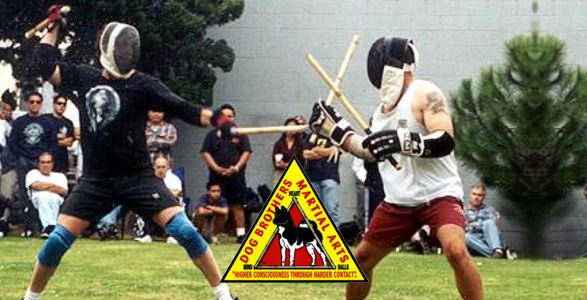 Full contact kali is the name of their game and they play it for real.  Stitches, cuts and a body full of welts is their badge of honor.  Maybe a more appropriate name for them would be “The Bruise Brothers”.

“We play rough, that’s for sure,” said Marc “Crafty Dog” Denny, leader of pack.  “We (the Dog Brothers) are a band of sweaty, smelly, psychopaths with sticks.  There’s nothing we like better than to spend an afternoon in a frenzy of full contact stick-fighting.”

“We go at it full-on and stop just short of inflicting a life-threatening injury,” said Denny.  “Sure we make a lot of trips to the hospital.  None of us are strangers to stitches and ice packs, but we never deliver a blow if the person is in a position where he can’t defend himself without serious injury. Our credo is higher consciousness through harder contact.  It’s a sign of respect for your opponent if you really go after him.  You are saying that you respect and believe in his skill and spirit to deal with it.  Yet, at the same time, even in the adrenaline of the moment, you are looking out for his welfare so as not to damage him and thus weaken the tribe.”

Prior to his introduction to Kali, Denny live in New York and had trained in Tiger Claw Kung fu.  After graduating from law school, the budding attorney moved to Washington DC where he trained in Tae-Kwon-Do.

“My previous martial arts training in Kung-fu and in the Korean arts gave me a base and some skills to work from, but it wasn’t exactly what I was looking for,” said Denny.  “Then one day I met this guy on a beach in California. He told me about the Kali Academy.  I’d never heard of Kali, or Dan Inosanto, or any of the arts it offered.  But I was curious so I checked it out and I’ve been there ever since.”

The name Dog Brothers was born one afternoon during an outdoor training session when four guys all named Mark showed up with sticks ready to play.

“Somebody would say ‘hey Mark’ and four guys would answer, so we started looking for some nicknames,” explained Denny.  “Well I did a neat move on one of them and he called me ‘a crafty dog’.  So that became my name.  Then there was this guy who was 18-years-old so we called him ‘puppy dog’.  The other  Mark always fought with a mix of everything so we called him ‘mongrel’.  Then one day I was reading a Conan the Barbarian comic book .  While leading his men into battle Conan said ‘Come on you dog brothers!!’ and there it was.  The Dog Brothers was born.  The combination of our nicknames plus Conan’s call to arms gave me the name I was looking for.  Since then the name has revealed itself to be a more fortuitous metaphor than we knew at the time.”

Another dog analogy could be that these guys fight like cats and dogs minus the cats.  The only protective gear the combatants wear is a fencing mask and street hockey gloves.  According to Denny the idea is to wear as little gear as possible.
“In a stick fight our code is to be friends at the end of the day,” said Denny.  “We can’t make up enough rules to cover the way you can damage a human being.  It happens to fast to have a referee so we don’t.  No one should spend the night in the hospital and everyone should leave with the I.Q. they came with.”

According to Denny the concept behind the pain is the realization of his full worth as a fighter and a person.

“I wanted my art to be real,” said Denny.  “There are those who are content with the exercise aspect of their art.  But I wanted to know what I could do.  We understand that bones might and do get broken.  Two years ago we had guy whose knee cap was split in half.  Once a stick caught me on the flat side of the thumb and peeled the nail back…that did smart a bit.  Broken ribs and broken knuckles are common place.  And of course, lots of nasty bruises all over the body is a given following a match.”

These full contact dog fights are called “Gatherings of the Pack”.  The matches are held two times a year.  In a three day period about 20 fights will take place. These bouts are videotaped and sold through Panther Video Productions and Dog Brothers Productions.

In order to fight at one of the Gatherings you must become a Dog brother.  This is accomplished by getting to know the other brothers and letting them get to know you.  The first task in becoming one of the pack is to get your name in front of Crafty Dog, Top Dog or Salty Dog, these council of elders will take it from there.

“The first level is “Dog” explained Denny.  “One must be accepted into the tribe.  The next level is “Candidate Dog Brother”.  At this time the candidate must show a level of realization in fighting that we expect of a “Dog brother”.  Typically we look for this level to be maintained for at least three Gatherings.  Then, one reaches the grand exalted status of “Dog Brother”.

Once this status is established, the newly accepted Dog Brother becomes a member of the pack and welcomed to participate in the Gatherings.  From that point on he may walk softly as long as he carries a big stick and is willing to use it.

A stick fight is an intense adrenal experience.  Those involved agree that an altered state of awareness takes place during the fury of battle.

“What we do isn’t mayhem with sticks,” said Denny.   “Our curriculum is based on developing the overall ability of a variety of martial arts skills.  In addition to using many Filipino and Indonesian stick fighting techniques we incorporate kicks, throws, locks and chokes too.  Our feeling is that even with a stick, grappling can happen and in this range the presence of a stick changes things in important way.  A good stickgrappler has good stick skills, good grappling, and good stickgrappling and is able to keep track of all three skills simultaneously.”

Although most of the participants in the Gathering come from a Filipino martial arts background Brazilian jujitsu has been a big influence in the events.  Somewhere around 1986 we allowed grappling in our stick fighting matches.  To become a more proficient grappler I began training with the Machado Brothers.  Their art of jujitsu was of great value to me and I incorporate  it in my stick fighting.  For example when someone is inside my guard; classic Brazilian jujitsu would be to post and keep his upper body up.  Well if a man is in my guard, I can take the butt of my stick and smash his elbow and he can’t post anymore.  If I am standing in a man’s guard and he back sweeps me, although I am flat on my back, I’ve still got the stick and I can smack him in the head as he comes over.  Plus there are many ways to choke with a stick.”

“I just love the fact that we were to intense for the Ultimate Fighting Championships,” laughed Denny.  “Even though my art was to harsh for their TV show they asked me to be a judge at UFC 10.  Obviously what we do isn’t for everyone.  Many of the people who come are established martial artists in their own right who want to test themselves and their skills.  What we want to make sure of is that the fighters who participate has the proper attitude.  We don’t want someone who will lose it in the heat of battle and do a follow-through that could send someone to the hospital. Again I want to emphasize our creed which is to make sure everyone goes home with the same number of brain cells he came with.”

A Interview with Mikhail Ryabko About Systema Stick Training

Vladimir Vasiliev - April 16, 2008
We use cookies to ensure that we give you the best experience on our website. If you continue to use this site we will assume that you are happy with it.OkRead more