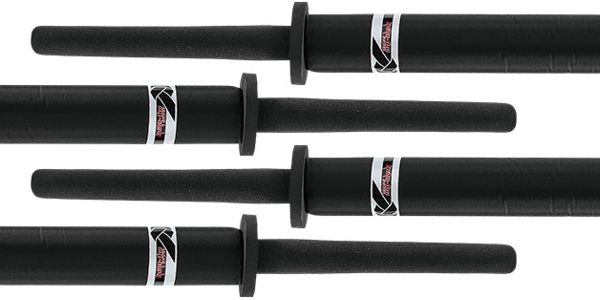 The patterned sound of click clack, click clack, click clack is heard as the modern stick fighter’s weapon goes through various repetition type drills as they learn blocking and striking motions. These clicks and clacks resemble the orchestrated beats of music, starting out slowly and building speed. Over time one will be able to execute numerous stick patterns creating a flurry of dust and wind as wood and rattan sticks clash. With practice one could obtain a spot on the school band playing the sticks adjacent to the bell and the triangle players.

To the dismay of the true warrior, these repetition type drills, traditional patterns and moves, have “wimpt out” and given way to the lowest common denominator resembling choreography of a ballet company. This is beautiful to watch in the theater but, of little value to the hardened stick fighter.

Martial artists often find themselves doing repetition type drills that can be more detrimental than helpful. Take for instance the above mentioned “click-clack” repetition type drills popular with many stick-fighting styles. While it is beneficial to learn how to block, counter and strike, it is often counterproductive to practice aiming for your opponent’s stick. Repetition type drills may sounds nice, but they teache only how to hit a non-target. Imagine a martial artist striking focus pads held out to the side but never striking nor understanding the concept of striking the centerline of an individual.

The stick was the common man’s weapon that could be deadly when wielded correctly to defend against swords, staves, spears and armor. In the beginning, the combatant’s training would start off with simple striking patterns and in time incorporate centerline technique that was pertinent for self-preservation and attack, but not to the point where excessive patterns stifled the outcome by employing grandiose pomp and flourishes.

Stand back and take an in depth overview of how stick fighting should be stripped of all the excess movements thus providing for a stronger centerline of attack. The ancient ones would turn over in their graves if they witnessed the “click-clacking” of the present day repetition type drills done by the stick warrior. There are five basic striking patterns which are internationally known and documented throughout the history of the stick. These patterns consist of five basic strikes and thrusts to the head, torso and extremities executed in three directions, i.e., vertical, horizontal and diagonal. From these patterns, techniques can be re-discovered, perfected, honed and added to your personal arsenal. The target should be the center of the body and then outward to the extremities. Many modern styles “click-clack” on the outside areas exaggerating blocks that could have easily been avoided had you been aware they were not in your circle of influence and just held your ground.

One can immediately recognize the downfalls of blocking the wrong areas with incorrect timing generally used by intermediate to advanced level students. Over blocking was only intended for the novice who cannot see the stick coming down and must over compensate. Why all the mumbo jumbo of patterns, dances and scenarios’ Plain reason, no one wants to get hurt and practicing with the stick is not forgiving! One mishap could result in days or even months of downtime, physical therapy and licking your wounds.

A more forgiving venue can be found if it is understood that “click-clack” blocking patterns as practiced in the various systems have a tendency to allow the brute force of the weapon to be absorbed by the stick fighter’s block. This action leads to excessive vibration and stress on the body’s joints. Many renowned martial artists agree that the best block is no block at all when it comes to weaponry. Teachers stress that blocking is only effective in a retreat or when backing down and the need for a buffer between them and their opponent exists. Deflection serves the stick fighter with a stronger arsenal providing for quicker offensive and defensive tactical scenarios mainly because a deflection takes place away from your centerline and is executed over a neutral area and not over the critical area of your body. Imagine fighting in your neutral area where if an error is made, you have the luxury of time to correct the situation.

A deflection merely redirects the energy and alters the striking path whereas the block absorbs it. A block is defensive, but in battle, an offensive atmosphere is required to persevere. Strong deflective techniques offer the warrior the ability to stop the opponent’s attack in an offensive manner thus negating retreat or regrouping while losing valuable time and energy in the heat of battle. These simple but extreme five basic strikes and thrusts streamline the warrior’s stance from squares and rectangles to triangles allowing for swift and decisive attacks and counter attacks in the fight, especially when more than one opponent is attacking. Fatigue will not set in as fast which can readily change the outcome.

There are extreme stick fighting groups out there. For example: The Dog Brothers or the Sayoc Group, who go in for the centerline shot resulting in realistic and formidable stick fights and encounters. Many present day “click-clackers” consider these groups crazy as they are too extreme, violent and blood letting. Fact is, the realistic stick fighter thrown into a volatile situation has the best chance of surviving compared to one who “clicks and clacks” the perimeter hoping their knuckles don’t get rapped. The stick is an aggressive and unbeatable weapon when wielded by an aggressive stick fighter. Passive practitioners who dabble in the “art of click-clack” might find more happiness pursuing the world of baseball or perhaps just hitting a pinata.

Strong aggressive stick fighting technique has not changed. The times have changed. And, with these changes, stricter laws, rules and regulations have made the way of the old stick fighter difficult to compete without lawsuits from whiners and ambulance chasers. To eliminate this problem instructors are almost forced to teach dance steps instead of martial conflicts. This was done to appease the lowest common denominator thus creating a group of present day “click-clackers” formally known as stick fighters.

Given the above situation in present day stick fighting, instructors needed a venue to bypass the pain and injury suffered during the first 30 to 50 hours of practice. It takes at least that amount of time until ones rhythm and timing can be honed thus lessening the problems of bruised digits, elbows and broken teeth. Actionflex Full-Contact escrima sticks were found to be the intelligent answer to those harsh problems. They offer the present day stick fighter the advantage to capture the rigors of real combat without bodily harm associated with traditional teachings and also alleviate eighty percent of those superfluous “click-clack” drills. Re-discover the next level of stick fighting that strives for centerline attacks and does not waste time beating around the bush.

A Interview with Mikhail Ryabko About Systema Stick Training

Terry Wilson - June 1, 2013
We use cookies to ensure that we give you the best experience on our website. If you continue to use this site we will assume that you are happy with it.OkRead more