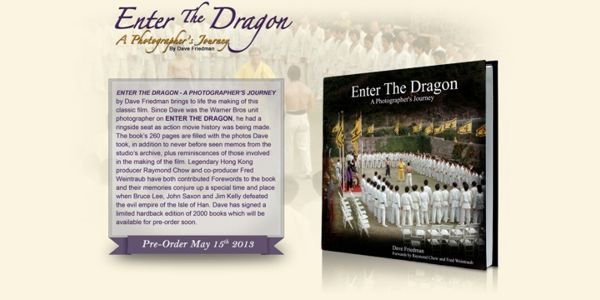 Enter The Dragon – A Photographer’s Journey by Dave Friedman brings to life the making of this classic film. Since Dave was the Warner Bros. unit photographer on Enter The Dragon, he had a ringside seat as action movie history was being made. The book’s 260 pages are filled with the photos Dave took, in addition to never before seen memos from the studio’s archive, plus reminiscences of those involved in the making of the film. Legendary Hong Kong producer Raymond Chow and co-produced Fred Weintraub have both contributed Forewords to the book and their memories conjure up a special time and place when Bruce Lee, John Saxon and Jim Kelly defeated the evil empire of the Isle of Han. Dave has signed a limited hardback edition of 2000 books which will be available for pre-order soon.

Friedman is a world renowned photographer and motion picture still photographer known for his pictures of celebrities, cinema, racing and classical ballet.

Blade Magazine: All About Knives

USAdojo - April 13, 2014
We use cookies to ensure that we give you the best experience on our website. If you continue to use this site we will assume that you are happy with it.OkRead more