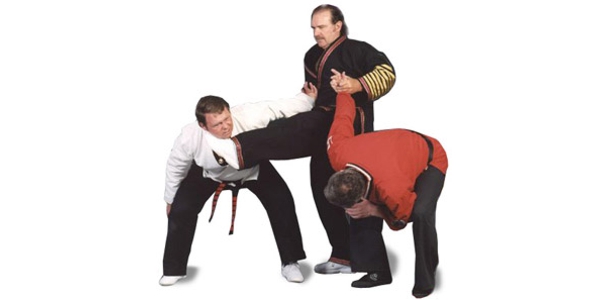 Shunning the limelight, Grandmaster Fred Villari has accomplished much with a minimum of publicity. He’s rarely seen in martial arts magazines. However 10,000 Black Belts and 15 million students after its conception Fred Villari’s Studios are now a far cry from the days when Fred Villari taught two students at seven in the morning in a walk-up studio in Waltham Massachusetts. The name Villari and Shaolin Kempo Karate is synonymous with East Coast Kempo. In 1995, annual Villari national tournament, held at the World Trade Center (Boston), drew 10,000 spectators to watch 5,000 participants.

As a young person growing up Fred Villari studied martial arts with his father. Later he was exposed to and studied several martial arts styles. During this period he and Nick Cerio corresponded and trained with Professor William K.S. Chow. Villari’s approach to Kempo was to maintain the style as he learned it through Chow and that is how it is presented in the Villari System today.

Fred Villari realized, because of his varied wealth of experience and his dedication in seeking the ultimate fighting system, that each method offered something unique, and each also had its glaring weaknesses that could make a fighter vulnerable. Grandmaster Villari concluded that there really were only four ways of fighting.

Grandmaster Fred Villari realized that the ultimate in self-defense lay not in one way or style of fighting. By combining the “Four Ways of Fighting.” he devised and developed ways to integrate diverse methods of fighting into one, eliminating weaknesses and vulnerabilities. This is the central theory and method behind Villari’s art of Shaolin Kempo Karate.

The backbone of the Villari’s style is the Shaolin system since he felt it was the best for promoting overall good health, wisdom and longevity. This system is well balanced, incorporating mind, body and spirit into one.

Fred Villari promoted his ideas well through solid instruction and modern business practices. Eventually his method was spread throughout the world as more than 500 schools have been opened that teach his method. His contribution helped open the way of the Asian martial arts, on a massive scale, to the ordinary layman. Fred Villari is still actively teaching and demonstrating the martial arts in his schools today.