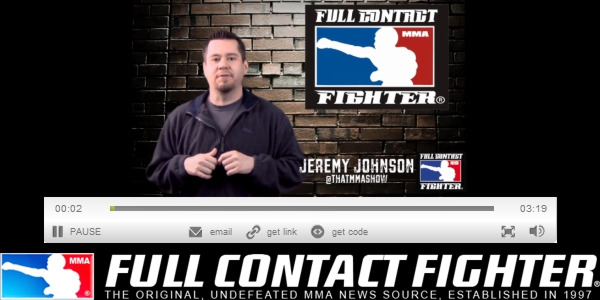 Founded in 1997 as a monthly newspaper, Full Contact Fighter has covered every MMA superstar and major MMA promotion in the world to date, including UFC, PRIDE, STRIKEFORCE, DREAM and K-1.

In 1999, Full Contact Fighter rolled out the first-ever, weekly MMA television series, covering the sport in magazine format, on both Madison Square Garden (MSG) Network and TSN in Canada . Full Contact Fighter apparel has been worn in competition as well as in the gym and on the street by a host of MMA legends and top champions, including Randy “The Natural” Couture, Wanderlei Silva, Georges St. Pierre, Jon “Bones” Jones, Urijah Faber, Matt Hughes, Jens Pulver, Eddie Alvarez, “Ruthless” Robbie Lawler and Jake Shields. Full Contact Fighter was also responsible for bestowing the moniker “The Natural” on Couture.

In 2011, Full Contact Fighter re-launched its website for the next generation of the sport with a state-of-the-art video player capable of delivering top-quality, high definition coverage in engaging, story-telling formats, including documentary and journal style webisodes that bring viewers into the lives and training camps of fighters and other well-known MMA industry figures.