They tried one of the boxing greats; they tried brass knuckles; they tried fixing the rules. But nothing could prevent “Judo” Gene LeBell from coming to the rescue.

Long before the Ultimate Fighting Championships made the Gracies a household name in the world of grappling, there was a contest that pitted a nationally ranked heavyweight boxer against a world-class judo player. The boxer was third-ranked Milo Savage and the judo champion was Gene LeBell. The Challenge came in 1962 in Salt Lake City, Utah.

” I can beat any martial artist in the world,” boasted heavyweight champion Milo Savage to a room full of karate students. A black belt instructor took exception to the boastful intruder and took him up on his challenge. With one punch the powerful fighter broke the karateka’s jaw, sending him to the hospital to have his mouth wired.

This incident was followed by an article titled “Judo Bums” published in Rogue, a national men’s magazine. Author Jim Beck expressed his contempt for the martial arts in general and he specifically took judo to task, saying that they were “sissies” and couldn’t hang in a real man’s sport like boxing. 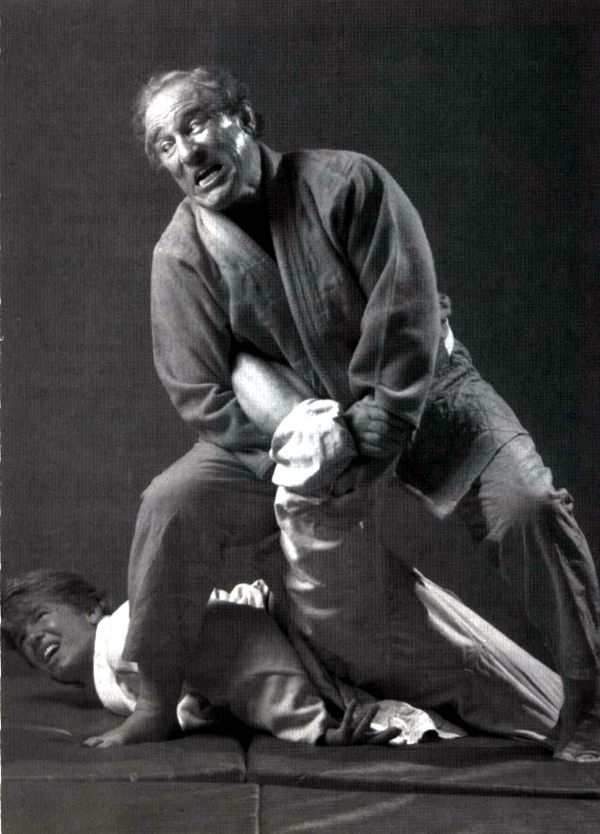 He went on to say in the article that any boxer could beat a judo man and backed up his bark with a thousand bucks to any judoka who could whip a trained boxer.

“When I read about Beck’s challenge it sounded pretty good to me.” recalled judo superstar Gene LeBell. “A thousand bucks back then was a heck of a lot of money, plus I didn’t like the guy’s attitude.”

Gene answered the challenge. It was decided that he would fight Beck, the author of the article knocking judo, who was a pretty good boxer in his own right. Beck didn’t seem thrilled about having his offer taken up so quickly, but the challenge had been made and answered, so all he could do now was establish some rules.

Beck agreed to wear a judo gi, boxing trunks and shoes. As an added incentive, the boxer was allowed to use speed bag gloves rather than the customary heavier boxing gloves. The National Association rules would be waived. The boxer could punch but couldn’t kick. It was suppose to be a 10-round fight and a winner would be declared when one of the men was disabled or knocked out for ten seconds. Gene would also wear a regulation judo gi, no shoes or gloves. With the rules in place, each man had a fair chance to use his individual skills in the ring and the match was set.

“I was suppose to fight this guy Jim Beck, who I was told was a pretty good boxer. But when I got to Salt Lake City I found out that I was going to fight Milo Savage.” said LeBell. “They bought in a ringer. Savage had gotten a lot of attention for busint a local karate instructor’s jaw so they thought he could take me out without breaking a sweat.” 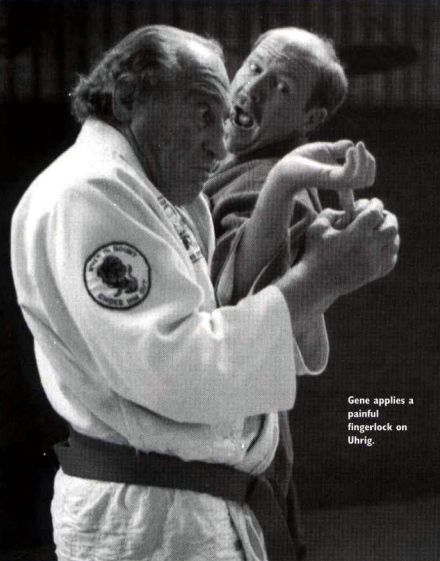 Savage had just won six of his previous fights by knockout, not counting the KO at the karate school in Utah.

“One of the great stories about this fight happened the night before I got into the ring with Savage,” said LeBell. “There was this sports guy who was interviewing me on his television program. Naturally I wanted to promote the fight, so when he asked me what I was going to do against Savage I gave away my game plan. On the air I told them I was going to use some strikes and kicks to set him up for my judo throws and submission holds.

“Well the next day they banned a lot of what I planned to use, but I didn’t know that at the time. Then the reporter asked me how I could put Savage on the mat when he has never been knocked off his feet before. I wanted wanted to give the reporter a good show so I started to act like a psycho and said ‘I’ll grab him, lift him over my head, and slam him into the ground then choke him out.’ The reporter then said, ‘show me.’ So I snatched the guy up and put a chokehold on him. He dropped his microphone and went out like a light. I picked up his mic, he was just laying there sound asleep, and I signed off the show for him.” 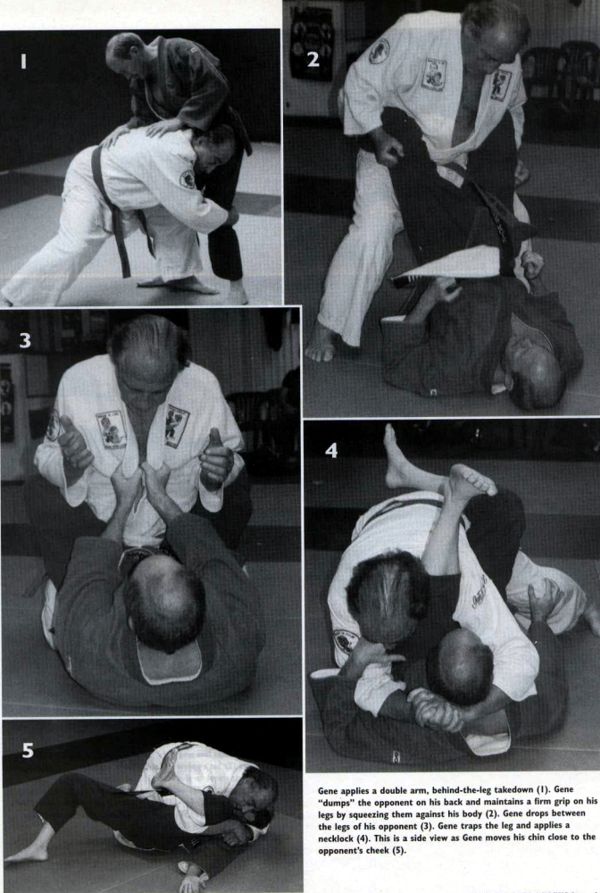 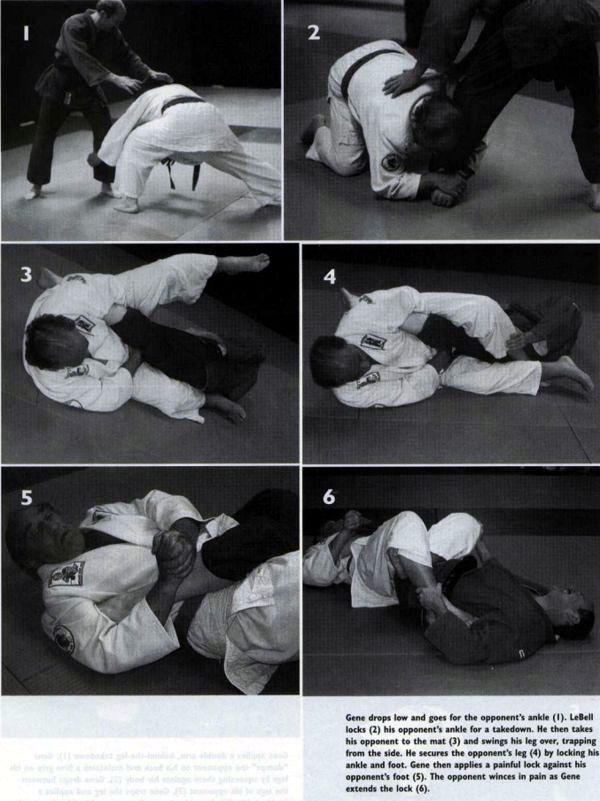 Fight of the Century

The fight was a complete sellout. Standing room only as boxer Milo Savage and judo Champion Gene LeBell entered the ring. Savage was wearing a tight, form-fitting karate jacket which was in violation of their previous agreement. This tight-fitting uniform would seriously hamper LeBell’s ability to apply many of his favorite techniques.

He was also using brass knuckles under his gloves.” recalled LeBell. “I was fighting with a dislocated left shoulder at the time and this guy hit real hard, so I had to be very careful not to get tagged.

What savage had was a metal plate under the leather, covering the back of his hand from knuckles to his wrist. This was a potentially lethal weapon when coupled with Savage’s punching power.

“They also changed the rounds, ” said LeBell. “It was supposed to be a ten-round fight and they changed it to a finish. The only way to win was for someone to be unconscious. 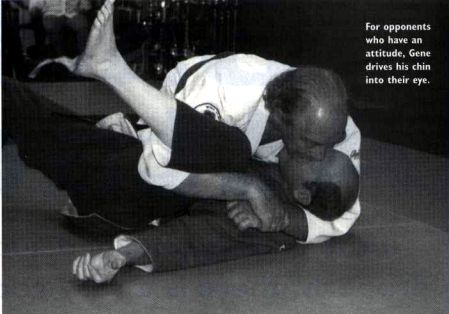 However, ” Judo Gene” was eager to prove the validity of the martial arts and agreed to go ahead with the fight. Protecting his injured shoulder, LeBell was cautious during the first round. Savage threw some jabs, but none landed. When LeBell attempted to take the boxer down, the judoka was surprised to see that Savage had been given some instruction in judo defenses. Savage avoided several of LeBell’s attempts to throw him by using a jigoti, a low crouching posture. At one point in the fight, the boxer even attempted to foot sweep the judo champion.

“The man was a good fighter,” said LeBell. “And I had to be careful to avoid getting hit with those lead-lined gloves he was wearing. In round two I was able to throw him and then mount him, but the bell rang before I could apply a submission hold. This was the first time Savage had ever been taken off his feet.”

Being put on the mat shook up the boxer as he became very cautious in the next round. Because of Savage’s strength and unwillingness to close with LeBell, he made it through round three.

Savage started the fourth round by leaning up against the ropes, daring LeBell to come and get him. This proved to ba a big mistake, because “Judo Gene” took him up on his offer. LeBell slipped under Savage’s jabs and executed an explosive maki komi harai goshi. In non-judo terms, LeBell wrapped both of his arms over Savage’s right arm, pivoted 180 degrees to the left and swept outside Savage’s right leg with his own right leg.

Once on the mat, LeBell applied a choke. /the boxer went night-night and martial arts history was made. The newspapers headlines read, “Judo Gene Tames the Savage Beast.”

The Fight After the Fight

“A Riot broke out right after the fight,” recalled LeBell. “The crowd was very irate. After all I had just beaten the local champion and we had to sneak out of town. But it was worth it. I made a lot of money and proved a point about the effectiveness of martial arts.”

Steve Uhrig, executive director for Gene LeBell’s Grappling World, sums up the fight and its meaning to all who wear a gi.

“Thirty-four years later, Judo Gene is still demonstrating the superiority of his system. Grappling has earned more respect lately and the advantages of cross-training are becoming more and more apparent. With grappling’s increased popularity over the years comes a Who’s Who of martial arts greats, including Bruce Lee, Chuck Norris, Benny Urquidez, Hayward Nishioka, Gokor Chicichyan, and Oleg Taktarov, to name a few. Put simply, Gene LeBell paved the way for us all. He did it first and he did it best.”