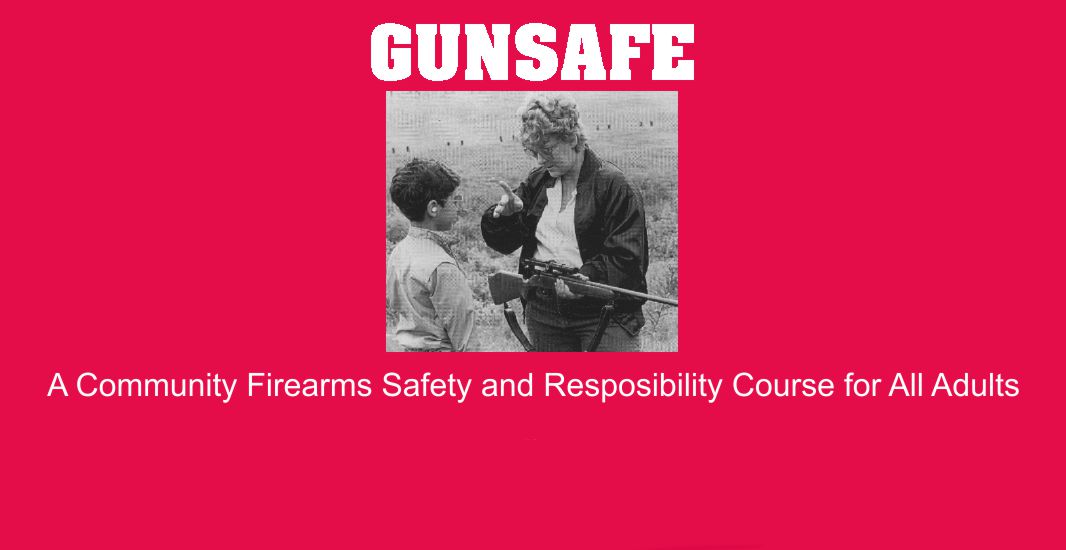 The purpose of GUNSAFE is to provide enough basic information about guns and how they work so that the average adult can recognize the general type of gun, know how it functions, and how to render it safe.

FIVE FUNDAMENTAL RULES OF SAFETY
1. Always keep a gun pointed in a safe direction.
2. Always keep your finger off the trigger until you are ready
to shoot.
3. Always keep the gun unloaded until ready to use.
4. Never point any gun at anything you don’t intend to
destroy.
5. Never put a trigger lock on a loaded firearm.

PURPOSE
America was once known as “a nation of riflemen.” Because of our pioneer and rural traditions, men, women and children used to learn from parents, relatives and friends how rifles, shotguns and handguns worked and how to handle them as safely and responsibly as any common tool. However, because of a great population shift from rural living to cities and suburbs, particularly since 1945, there has been a dangerous reduction in general knowledge about firearms.

Additionally, other societal changes, coupled with unrealistic images of guns and their effect in movies and television, have created a climate in which many people either fail to respect guns or have an unreasonable fear of them. That fear unfortunately has fostered a belief that by avoiding all knowledge about firearms, contact with firearms and keeping all guns, including toy guns, out of the home will insure safety. Unfortunately, that frequently leads to tragic consequences. Non-gunowners sometimes find unknown guns among the possessions of deceased friends and relatives-and don’t even know if they are loaded or safe to handle.

Children who have been brought up isolated from guns may encounter them in the homes of friends and relatives, including in the homes of law enforcement personnel. Children also find guns abandoned by criminals in school yards, parking lots, parks and elsewhere. They may think they are toys, or otherwise misuse them with unwelcome and even tragic results-or they may bring them to an adult who knows no more than the child how to render the gun safe.

Such a lack of basic, simple, mechanical knowledge about guns and how they work can put emergency response teams and firemen at risk if they are called into situations where loaded firearms could be present.

Based on the premise that some knowledge is always more helpful than ignorance, GUNSAFE is designed to teach and reinforce basic safety and responsibility rules for gunowners and nongunowners alike. The program is value-neutral; we neither promote nor discourage responsible, lawful gun ownership.

What you learn in GUNSAFE may never be needed in practice, but knowledge banked against eventuality is a good investment in safety for you and your family.

GUNSAFE A Community Firearms Safety and Responsibility Course for All Adults

Unarmed Against a Bladed Weapon