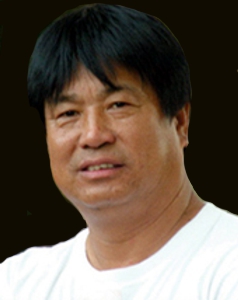 He Jinbao, originally from China, is the grand disciple and sole lineage carrier of the Xie Peiqi branch of Yin Style Baguazhang, which was passed down to him by Dr. Xie Peiqi, who died in 2003.

When asked why the complete art of Yin Style Bagua is not widely known, He Jinbao replied “Few have practiced it, and few are left to teach it.” After the loss of his first student Liu Fang, Dr. Xie became worried that the art might be lost forever because it has never been taught publicly. Towards the end of his days, Dr. Xie and He worked hard to accelerate He’s training and attempt to document the complete style in a series of instructional videos.

At the age of 15, having never met Xie Peiqi and knowing nothing about Baguazhang, He traveled to the home of Xie Peiqi and asked the master to instruct him while he was drinking tea. Xie inquired, “What kind of strength do you have?” and he rose from his seat to get a closer look at the boy, feeling his arms and legs and examining him. Xie took him to the courtyard and demonstrated to him several moves from the Lion system of Yin Style Baguazhang in full speed and asked He to repeat them. When He was unable to emulate them properly, Xie replied, “Why are you so stupid?” Xie then struck the boy several times and returned inside to finish his tea.

He remained outside attempting to practice the moves. Finally, Xie called out to him, “How are the moves coming?” Jinbao said “OK,” to which Xie replied “So go home and practice.” Determined to be better prepared for his next lesson, He spent the next week attempting to learn from Baguazhang practitioners in the park, not knowing that it was a different style of Baguazhang. When he returned, Xie almost sent him away for it.

In 1976, after practicing with Xie for 5 years, he met Xie’s best student, Liu Fang, from whom he began to receive additional training. Liu Fang eventually died, and He Jinbao was taken on as Dr. Xie’s primary student.