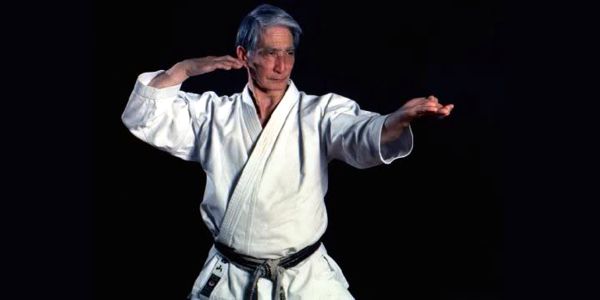 The International Traditional Karate Federation (ITKF) is in mourning today.  President and Chairman, Hidetaka Nishiyama passed away on November 7, 2008, at the age of 80. Mr.  Nishiyama was a world renowned karate master well known for his steadfast dedication  to the preservation and protection of the Martial Art of Traditional Karate.

“He was truly one of a kind”, said Acting ITKF Chairman, Rick Jorgensen. “He has  greatly influenced and impacted the lives of those who practice Traditional Karate.”

“His vision was very broad. It included people of all ages and all styles of karate”, said  Jorgensen. “Sensei Nishiyama strongly held the belief that the Martial Art of Traditional  Karate was a path of self development. School children, adults and seniors can use the principles of Traditional Karate to achieve their highest potential through the human development of mind, body and spirit. In the last years of his life, he created a system of
training these Budo principles for the use in all styles of karate. He believed that creation of a universal system for self development through Budo training was his greatest achievement. He left the ITKF with that treasure of knowledge.”

“It is now up to the ITKF to ensure Sensei Nishiyama’s life work carries on and that we  are unwavering in our commitment to preserve for future generations the Budo principles  of the Martial Art that he saw as the necessary underpinnings for those who practice Traditional Karate”.

Born in Tokyo, Japan, on October 10, 1928, Mr. Nishiyama had a long history of Martial  Art training beginning at a very early age. He began training in Kendo under the  instruction of his father, an accomplished Kendo master, at the age of 5. At the age of 10 he began his training in Judo and in 1943 he joined the Shotokan karate dojo where he achieved his first degree black belt in 1946 under Master Gichin Funakoshi.

Regardless of where Mr. Nishiyama traveled, he left his mark as a leader. He was named captain of the Takushoku University Karate Team and was co-founder of the All Japan Collegiate Karate Federation. He received a Master of Arts degree in economics from Takushoku University and in 1951 he co-founded the Japan Karate Association and was elected to its Board of Directors.

In 1960 he published his first book: Karate: The Art of Empty-Hand Fighting. Today, his book still remains one of the foremost authoritative writings on the Martial Art of Traditional Karate.

In 1999, Mr. Nishiyama received an American flag which had flown over the Capitol Building in his honor on October 10 – the date of his birthday. The flag was in recognition of his unwavering effort on behalf of Traditional Karate and to acknowledge his significant contribution to the physical and psychological health of Americans. In 2000, Mr. Nishiyama was honored by the Emperor of Japan who presented him with the Order of the Sacred Treasure, Gold Rays with Rosette on the grounds of the Imperial Palace in Tokyo.

The Republic of Poland also honored Mr. Nishiyama in 2001 with the Officer’s Cross of  the Order of Merit of the Republic of Poland, which was presented in Warsaw by the  nation’s President, Aleksander Kwaśniewski at the opening ceremony of the first  Traditional Karate World Cup.

He is survived by his wife Yohko, daughters Yumi, Amy, Nami, sisters Michiko Ijima and Sumie Momose. A public memorial service will be announced at a later date.

Emil Farkas: The Man, The Magician, The Martial Artist