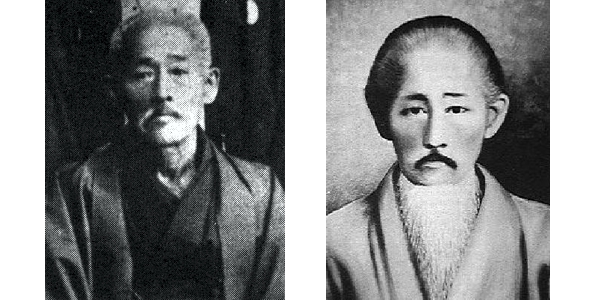 Higashionna is a very famous karateka, made so mostly by one of his students, Miyagi Choyun, the founder of Goju Ryu, one of the most popular styles of karate worldwide. Miyagi and O-Sensei trained together under Higashionna and remained friends until Miyagi’s death in 1953.

Kanryo was born at Nishimura (West Village), Naha in March, 1853, the fourth son of Higashionna Kanyo, a high ranking Bushi who didn’t fare well financially during the final absorption of Okinawa into Japan and the abolition of the Bushi and Samurai classes. Higashionna’s father was forced to ship firewood for a living from the Kerama Islands to Naha in a small junk. The poverty of Higashionna’s family meant that his education was neglected and Higashionna was likely unable to read or write.

Higashionna was known as Mushu as a young boy, and also later nicknamed Ushi-chi. While still a teenager, he became interested in martial arts and the rumors say that he began to ask different masters to teach him Te. Sometime in his teens, Higashionna began studying Tote under Aragaki Seisho (probably around 1867, the year Aragaki gave a famous demonstration in Shuri), and continued training for three years until Aragaki was called away to Beijing, China on court business as a translator in 1870. Not forgetting his student, Aragaki introduced Higashionna to Kojo Taitei (1837-1917), a martial artist from Okinawa’s well known Kojo family.

Kojo Taitei had trained under at least one of the same Chinese instructor as Aragaki himself and agreed to teach the young Kanryo. Kojo Taitei taught Kanryo for about two years until the two parted ways for unknown reasons. It may be because Higashionna decided that he must leave Okinawa and go to the source to further his martial arts training. Through Kojo Taitei, Kanryo met a palace official named Yoshimura, who helped Kanryo obtain passage to Foochow, a city in Fukien province, China famous for its martial arts instruction. Higashionna left Okinawa in March of 1873.

In China, Higashionna was young, without resources and he didn’t speak Chinese. Higashionna began staying at the “Ryukyukan” (Okinawa house), a large building for Okinawans to live in while getting their bearings upon arriving in China.

Higashionna’s most famous teacher was a Chinese gungfu master with the nickname “Ryuru Ko”, whose exact identity remains a mystery to this day. There are many theories about the man’s identity, although all involve small inconsistencies that don’t add up. Perhaps the nickname “Ryuru” belonged to more than one instructor, and over the years, two or three gungfu masters have merged into one and caused confusion. Regardless, these are facts for further research to uncover. The master “Ryuru Ko” is possibly the same man who taught Nakaima Norisato (1850-1927) in Foochow, who passed this style through his descendants and now forms the style Ryuei Ryu.

Higashionna began training with “Ryuru Ko” in the year 1877, four years after arriving in China. His first four years in China were probably spent training in the martial arts, but not with Ryuru Ko, his famous teacher. Much research into this time of Higashionna’s life has failed to reveal exactly where he was and what he did during this four year span. Historians speculate that at this time Higashionna probably trained at the Kojo family dojo in Foochow, a gathering place for Okinawan martial artists, where Chinese masters would sometimes visit.

Testimony on how long Higashionna Kanryo remained in China varies from ten to thirty years, although thirty years is quite unlikely. We can say for certain that he remained in China long enough to be a skilled martial artist, so skilled that he spawned decades of tradition. The most likely scenario is that Higashionna stayed in China for a few years, and then continued to visit China for many years even after returning to Okinawa. There are several different written histories from the time to support Higashionna traveling to China on several different occasions.

In Okinawa, the martial arts that Higashionna knew did him little good in making a living. Most stories say that he returned to his parent’s firewood business, hardly a fitting fate for a martial arts master. Fortune smiled upon him when the Japanese army became interested in Tote during some army drafts in the early 1890’s. This caused an interest in Tote from Okinawan youth, and Higashionna began teaching sons of Wealthy Naha families in the courtyard of his parents’ home. Before the Japanese interest, Okinawan youth were somewhat ashamed of Tote’s Chinese roots. Higashionna’s skill became well known and he began to overshadow other famous teachers who had already introduced similar styles.

From examining Goju Ryu kata today as compared to Chito Ryu, few look similar, only Sanchin seems to be close, and Chito Ryu Sanchin looks like Goju Sanchin mixed with Goju Tensho, a kata invented by Miyagi after Higashionna’s death. O-Sensei wrote that he learned several other kata from Higashionna, including Saifa, Seipai, Kururunfa and Rohai. Saifa, Seipai and Kururunfa are still found in Goju Ryu, but none of Higashionna’s students ever credited Higashionna with teaching a kata called Rohai. Rohai remains somewhat of a mystery. Surprisingly, none of the other kata remained with Chito Ryu.

USAdojo - May 28, 2005
We use cookies to ensure that we give you the best experience on our website. If you continue to use this site we will assume that you are happy with it.OkRead more