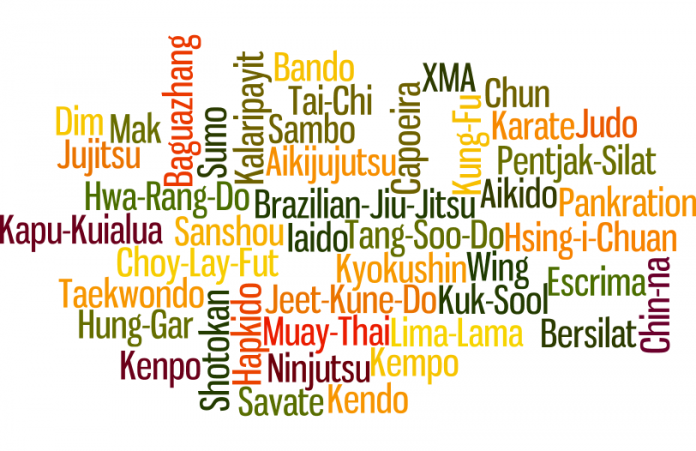 If you want to start martial arts, first sort through the best-known martial arts and pick the art that’s best for you.

You’re looking for a breathtaking workout, a physical path to spiritual growth, or no-holds-barred moves for dropping an attacker. But where to begin? With Jujutsu? T’ai Chi? Use this guide to sort through the best-known martial arts — and pick the path that’s best for you.

Karate-Do
Translation: “The way of the empty hand.”

Origin: In the 16th century the conquering Chinese banned weapons in Okinawa; the islanders learned Kung-fu style boxing as a means of defense. Karate was perfected in the 1920s by Funakoshi Gichin, an Okinawan schoolmaster.

Big Picture: Kicks and punches concentrate the greatest amount of energy into one spot. The Karate “chop” was first used by Okinawans to smash through the bamboo armor worn by invading Japanese.

Best For: People looking for a no-nonsense mental and physical workout.

Low: Sparring against someone who’s out of control.

Web Coordinates: Cyber-Dojo includes an extensive list of recommended schools and a bulletin board for corresponding with Cyber-Dojo members in 20 countries.

Origin: In the 6th century Bodhidharma, a Buddhist monk, developed a series of 18 exercises combining motion and meditation and taught them to the ascetic monks of the Shaolin temple. Kung-fu grew out of these exercises, which proved devastating in combat.

Big Picture: A complicated martial art of some 400 styles developed from careful observations of animals fighting. The motions are fluid, even acrobatic.

Best For: People who are looking for a dancelike martial art, where technique counts for more than raw power.

High: Throwing a 360-degree rolling kick — only Bruce Lee-types can do it.

Low: Maintaining a “horse stance” until your legs shake uncontrollably.

Beginner’s Heads Up: A neophyte might feel silly at first because the moves require you to be simultaneously alert and relaxed — a counterintuitive combination.

Competition: In sparring, score one point for a simple kick, three points for a throw.

Origin: Aikido is rooted in the medieval art of Aiki-jujutsu, which was taught only to initiates loyal to the Minamoto clan. It was in a school founded by the clan’s descendants that Ueshiba Morihei (1883-1969) learned the techniques from which he would later develop modern Aikido.

Big Picture: Practitioners are taught to tame aggression and harness the attacker’s force. Throws are executed using wrist and arm locks. Aikido is based on the use of ki, the Japanese term for the life force.

Best For: Those seeking spiritual and physical well-being (meditation is integral to Aikido), and turn-the-other-cheek types who favor a defensive way of handling conflict.

High: Subduing two opponents by turning their energy against them.

Low: Sparring sessions when you can’t get into the flow, and the attacks seem like, well, attacks.

Beginner’s Heads Up: Everyone takes a turn being the attacker. Meaning? Get ready to get thrown.

Web Coordinates: Aikido Today Magazine home page: there are just a few highlights from the magazine — and a list of hundreds of schools, books, and videos, plus a calendar of events.

Taekwondo
Translation: “The art of kicking and punching.”

Origin: Its roots date to the T’ang Dynasty (618-906), when the kingdom of Silla’s army borrowed Chinese “open-handed” fighting styles to compensate for a lack of weapons. It was declared South Korea’s national pastime in 1954.

Big Picture: Distinguished by its powerful arsenal of kicks. Some jumping kicks, developed to knock a rider off a horse, reach 10 feet in the air.

Best For: Those seeking a physically demanding workout with lots of flamboyant legwork.

Beginner’s Heads Up: Some clubs teach Taekwondo as a sport, leading to competitions. Others teach it as a traditional martial art, melding self-defense and Buddhist philosophy.

Competition: Three-minute rounds of full-contact sparring. Points are awarded for scoring a “trembling shock”– a kick that stops an opponent’s advance.

Origin Beginning: in the 17th century some martial arts schools incorporated the principles of atemi, a way of hitting certain “pressure points” that are known to cause pain. This fighting style became known as jujutsu, practiced by both the Ninja and Samurai warrior clans.

Big Picture: A carefully thought-out system of throws, holds, and locks applied to the limbs and joints. Favoring balance and speed over strength, Jujutsu relies on atemi points and has few rules.

Best For: The flyweight who dreams of throwing a 300-pound bully to the mat.

High: Knocking someone down with a simple finger joint lock.

Low: Getting walloped in an atemi-waza (vital point), such as your temple.

Beginner’s Heads Up: Jujutsu is arguably the most aggressive martial art. Everything is hands on, up close, and personal.

Competition: Sparring matches have it all — kicks, punches, take downs, and submission holds.

Web Coordinates: The Danzan-Ryu Jujutsu Home Page: background on the history and techniques of the Danzan-Ryu style of Jujutsu, plus a calendar of events and a list of schools in 17 states.

T’ai Chi Ch’uan
Translation: “Supreme ultimate fist”; also “supreme axis,” for the axis at the center of the yin-yang symbol.

Origin: Founded in the 12th century by Chang San-Feng, a Taoist monk who observed a snake and a crane fight to a stalemate. His realization: it’s better to yield before an attacker than to meet force with force.

Big Picture: Consists of a slow-motion series of ritualized movements designed to balance yin and yang through the manipulation of chi — the vital life force that’s centered below the abdomen.

Best For: Combining meditation with a workout. Not for the adrenaline junkie. High The rush of chi.

Low: Getting tagged by your coworkers as a Taoist guru.

Beginner’s Heads Up: While it’s centuries old, T’ai Chi gets lumped together with New Age activities. Says one practitioner, “A lot of people think it’s touchy-feely-self-revealy. It isn’t.”

Competition: In “push hands” one person tries to knock another off balance, using a minimum of force.

How to get started in the Martial Arts By Natalie Engler
The International Magazine of T’ai Chi Ch’uan. From: Issue 03 | June/July 1996 | Page 144