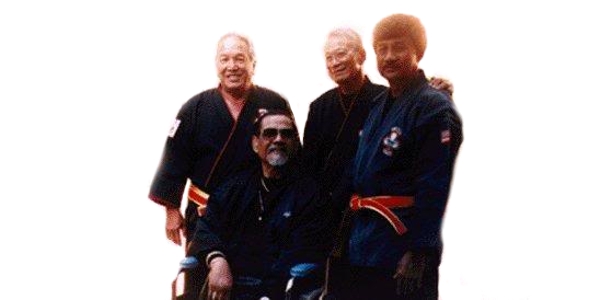 The Martial art of Kajukenbo is a blend of Karate, Judo and Jujitsu, Kempo, and Boxing. From theses arts it gets its name ka for karate (tang soo do) ju for judo and jujitsu, ken for kenpo and bo for chu’an fa gung fu (Chinese) boxing.

Kajukenbo came together in the Palomas settlements of Hawaii during the years between 1949 and 1952. There were five different martial arts practitioners from different styles who came together to developed Kajukenbo. They developed one style that would complement each of there individual styles and it had to allow for effective fighting at all ranges and speeds. The men credited with the founding of Kajukenbo is Siju Adriano D. Emperado who practiced kempo and escrima, Peter Young Yil Choo who practiced Tang Soo Do and Boxing, Joe Holck who practiced Judo (Danzan Ryu Jujutsu), Frank Ordonez who practiced Kaheka Lane Danzan Ryu Jujutsu, and George Chang (sometimes mistakenly referred to as Clarence Chang) who practiced Chu’an-Fa Chinese boxing. These men called themselves the Black Belt Society. The founders of Kajukenbo wanted to develop an art that would “make them invincible in the most difficult streets of Hawaii”.It was decided that kempo would be the center around which Kajukenbo was built. To test the effectiveness of their techniques the five founders would provoke fights in and around Hawaii’s slum settlement of Palomas. If the techniques they used were consistent in helping them iver come their opponents in street-fighting then that technique was kept as part of the system. From these fights came Kajukenbo’s Quins (forms or kata), Natural laws (self-defense), Tricks (close-quarters fighting), and grab arts (escapes).

Kajukenbo uses all ranges of fighting. There are kicking techniques, punching techniques, trapping techniques and grappling techniques. Many schools of karate and Korean martial arts concentrate on kata, but Kajukenbo concentrates on self-defense movements because protecting one’s self in a street-fighting situation is primary. As the martial artist reaches higher levels in Kajukenbo meditation and chi training begin.

Kajukenbo stresses the following-up of techniques based on the opponent’s reactions. The idea is to end the fight with the fewest techniques possible. It is important to know how an opponent will respond to attacks, and how best to take advantage of his reactions.

Kajukenbo training is very physically intense. It is important to be in good physical condition, thus warm-ups, callisthenic’s, bag work, sparring and grappling are important. Kata is performed to fine-tune a person’s movements. Partnering is important because it teaches a student how to manipulate an opponent and how to follow up on the opponent’s reactions.

The word Kajukenbo is derived from the letter of the styles that contributed to the creation of the art. Together they make up the Kajukenbo motto: Through this fist art one gains long life and happiness.

KA (long life) – comes from the word Karate, an art form that places the emphasis on hard and powerful techniques. The karate influence was from Tang Soo Do brought by Peter Young Yil Choo.

KEN (fist) – comes from Kenpo, a form of karate that not only stresses the hard and powerful movements, but emphasizes multiple and fluid hand techniques. The kenpo influence was from Kosho Shorei Kenpo brought by Adriano Emperado.

BO (style) – comes from Chinese and American boxing. Chinese boxing means Kung Fu, which puts emphasis on flexibility and agility, parrying and evasive movements that flow together. The Chinese boxing influence was from Northern and Southern Sil-lum styles brought by Clarence Chang.