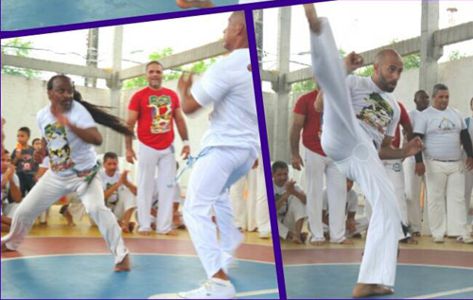 During this trip Ivan experienced the historical connection between the art of Capoeira and the African/Brazilian slaves of the early 1800’s. Ivan’s training was based in the World Heritage site of Olinda, Recife Brazil, also the birth place of his Mestre. Joining him for the special occasion were several of the instructors and students from Capoeira Camara’s sister academies worldwide, including Canada (Quebec, Calgary, Toronto, Vancouver), Bermuda, Russia, Hong Kong, Taiwan, Malaisia and Ukraine.

Everyone went through daily 4 hour intensive training sessions, and Roda de Ruas (Street Games/Fighting) in the evening. Ivan visited the Quilombos (jungle sanctuaries) were slaves would escape to secretly practice this outlawed martial art in the early 1800’s. “The experience was exhilarating; we were expressing our freedom playing/fighting in the same Quilombos (jungle) that centuries ago slaves escaped to their freedom. It gave me goose bumps.” explained Ivan.

During the batizado event, Ivan’s Contra-Mestre was granted his full Mestre belt (the second last belt that can be earned in Capoeira) from Mestre Perguica who is a student of the father of Capoeira – Mestre Bimba. In a surprising turn of events, Ivan Outerbridge (also known as Meio Quilo) was also awarded his first level Instructor belt! (Belt number 10 of 15 belts) Several of the other instructors also moved up in rank. Ivan’s Mestre, and the other 13 Brazilian Mestres present agreed that Ivan has shown commitment to Capoeira and his skill is continually improving. Ivan has been training in Capoeira for 14 years, and it was an honor for him to witness his instructor receiving his Mestre belt.

As the trip concluded, Ivan was humbled by the experience of training in the birthplace of the martial art that he has dedicated so much time and effort to. This trip has intensified Ivan’s passion and commitment for Martial Arts in Bermuda and around the world and will promote Capoeira ever more fervently. Ivan also holds 2nd Degree Black Belts in Shotokan Karate and Sanuces Ju Jitsu, and a Blue Belt in Arnis (Stick & Knife Fighting). Feeling the impact first hand that Capoeira has had on the Brazilian culture and how it is used today as a way to transform one’s life, Ivan has vowed to continue to bring this exotic martial arts to the Bermuda community.

“Capoeira is not just a martial art, it is a feeling, a way of being, and the music is the tool to externalize this feeling translated into movement. It is the tool to reconcile passion and reason – success depends on the balance of these two values. Capoeira is a philosophy of life, a mission in society, our way of contributing to the world. Capoeira does such good for us, that we should take it and share it with all corners of the earth and share it with the people. “ Instructor Ivan ‘Meio Quilo’ Outerbridge holds adult Capoeira classes three days a week and kids Capoeira classes on Saturdays. If you are interested in taking classes contact Ivan Outerbridge at 232-6261

Helping Your Child Learn Self Control

USAdojo - April 16, 2017
We use cookies to ensure that we give you the best experience on our website. If you continue to use this site we will assume that you are happy with it.OkRead more