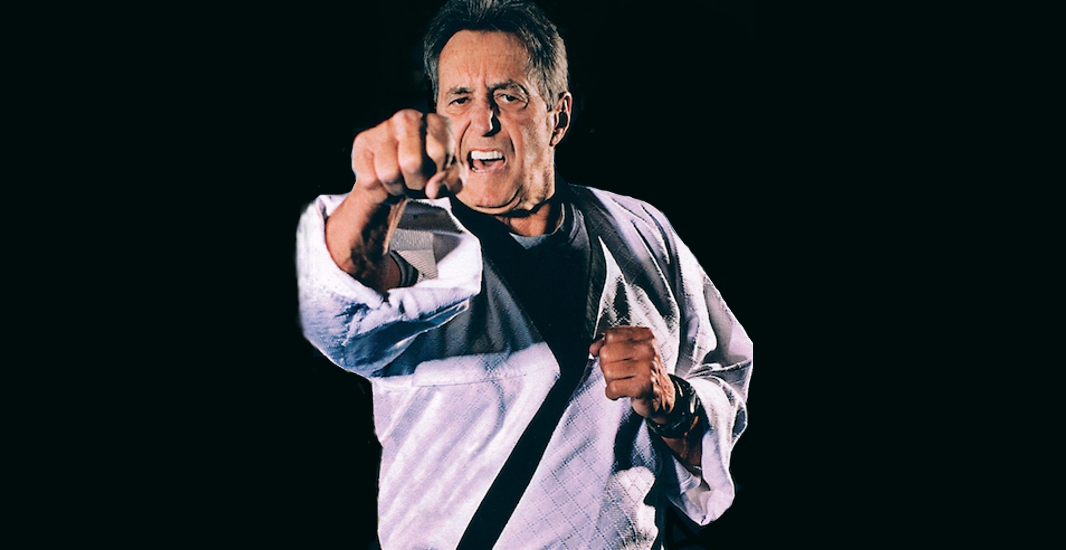 J. Pat Burleson is the founder of the American Karate system. He held a 10th degree black belt. Pat began his study of the martial arts in Japan in 1957, a competition career in 1963. In addition to regional championships, he claimed the first US National Championship in Washington D.C. in 1964.

As a youngster, Pat Burleson started boxing and eventually he went to the Golden Gloves Championships while still in high school. He joined the Navy in 1955 to “see the world” and while stationed in Asia this stocky seaman became a traveling boxing champion for the USN, fighting at bases throughout the Pacific basin. As a fighter from the United States, he naturally came in contact with the fighting arts of the Orient. His original martial arts training came in the wado-ryu style in 1957 in Iwakuni, Japan. Pat Burleson trained with several schools of  karate and Chinese boxing in Japan and Hong Kong before he came back to the states in 1959.

Pat Burleson settled back into his hometown of Fort Worth, Texas, where he worked out with the few other ex-servicemen that he could find that had trained in Asia.  He had already earned a red belt in Korean tang soo do when he was introduced to Dallasite Allen R. Steen. “Allen was a senior to me and I can definitely remember that his abilities were better than mine at the time” says Burleson.

Allen Steen was a brown belt under tae kwon do pioneer Jhoon Rhee and was eager for his new friend to meet Mr. Rhee. “He [Rhee] was very open to letting me work out with his group,” recalls Burleson, “although he wanted me to change my red belt to brown belt for his system.” Allen Steen made his black belt in the summer of 1963 and three months later Burleson was promoted to 1st-degree black belt.

When Mr. Jhoon Rhee moved to Washington D.C., Allen Steen and Pat Burleson took over the reigns as the fathers of karate in the Southwest. “In my opinion the American system of martial arts really started in two places in this country,” says Burleson, “in Chicago and in Dallas/Ft. Worth.  It spread quickly from there to place like Los Angeles and New York, but the real beginnings were in those two places.

In 1963 the 1st World Karate Championship was help in Chicago,  jointly sponsored by Robert Trias and the late John Keehan (aka “Count Dante”).  “AlGene Caraulia won it as a brown belt,” Pat Burleson states.  “Allen was there, myself, Jim Harrison and a few others.  In those days there were no belt division; in fact, no rules to speak of. That first time in Chicago you saw the marriage of kicking and punching.  We went up there with only our kicks,  but we dropped everyone we hit. After seeing the hand techniques on those guys,  however, we went back to learn some punches.

“Ed Parker is a good example of that type of thinking,” says Burleson.” He and his bunch [from California] were at Chicago and they couldn’t kick over knee high, but they went back and worked and six months later they were doing head kicks.” Pat Burleson maintains that the birth of American martial arts came in 1963 in Chicago. “We started to integrate right there.”

There weren’t very many tournaments in those days. Fighters had to travel all over the country if they wanted to compete in the handful that were available. 1963 was the first year of the Southwest Karate Championships, sponsored by Steen, and later to be renamed the United States Karate Championships.  Ed  Parker  held  his  first  International  Karate Championships in 1964. “The people to beat at those first few tournaments were the Chicago/East coast fighters and the Dallas/Ft. Worth people.” remembers Pat Burleson.

It was Pat Burleson himself who won the  1st National Karate Championships in 1964 in Washington D. C., held by Jhoon Rhee. Burleson joined AlGene Caraulia, who later taught out of Cleveland Ohio, as the first nationally recognized champions in “American Karate”. Burleson, in fact, gained the nickname “the granddaddy” of the early tournament fighters. Jhoon Rhee remembers how proud he was that one of his own students would win the first Rhee tournament.

In spite of his own reputation, Pat Burleson says that the three top fighters of that period were Allen Steen, Mike Stone, and Jim Harrison. “They were totally awesome,” claims Burleson, “Because if you didn’t defend yourself against these three you could be seriously crippled for life. A lot of guys were intimidated by them and didn’t fight that kind of fight, but if you intended on beating them then it turned into a life or death thing.”

This period of competition is justifiably called the “Blood-‘n’-Guts Era” of American martial arts.  Although the rules stated certain grounds for disqualification most competitors and officials alike ignored them. Fighters were constantly kicked out of the rings.  Broken bones and the drawing of blood were commonplace.

“I loved it when the hand and foot pads finally came out because I had something constantly broken on me.” says Burleson. “I always had hands and feet, and toes on both sides broken while I was competing.  When I fought without the equipment all those years you wondered not only if you were going to be knocked out, but if your were going to be cut and scarred for life. Each punch and kick had the capability to do permanent damage to you.  Today the worst that’s going to happen to you is you’re going to be knocked out.”

When comparing the competitors of today to the early karate fighters Pat Burleson says it’s like asking if modern boxers could compete with the bare-knuckled brawlers of the past such as John L. Sullivan. “I think the people who fought bare-knuckled boxing were meaner and tougher than boxers of today,” says this old boxer. “And it’s the same way in karate. I consider the people I fought bare-knuckled much meaner than anything I’ve seen lately, although technique-wise, I’ll admit there’s no comparison. these new fighters are far superior to us.”

“You know, I’ve been criticized, along with some other people, for teaching the fighting aspects of the martial art too harshly. And we did. But it’s easy for someone opening up a school today to say that someone like Allen Steen or myself were barbarous in or hard fighting methods. It’s easy for that person to go and open a karate school in North Dallas and nobody will question them as to whether or not karate will work. The reason is that we greased the rails for them. We created the respect for the martial arts in this country by proving that it worked,” says Burleson.

“Today  most instructors don’t have to worry about some cowboy coming in and challenging them, saying ‘Let’s see if your karate really works, black belt!’  I’ve forgotten how many people I’ve literally kicked out of my school who’ve challenged me.  We didn’t have any other option than to show the public that the martial arts worked.” maintains Burleson.  “Americans had never heard of karate. They only knew the mystical aspects of it.  We took it out of that realm and made it an effective fighting method.  That was part of martial art’s evolution in America. And that’s why we did what we did.”

“But,” adds Burleson, “in doing that we neglected 90% of the character building aspects that go with it.  We were so busy fighting and showing that it worked that we neglected the emphasis the true  martial spirit and the mental aspects that go with it. But I’m proud of what we’ve done in this country.  We’ve pioneered a rugged art, one that’s respected anywhere in the world.  I hope that we are now coming a full-circle and emphasizing the philosophies that should go along with any martial art, even an American one.”

“You have got to be flexible,” Burleson point out. “Robert Trias has the largest organization in the world [The United States Karate Association] and he did it by being flexible. Originally he let some guys in that I thought were weenies, but in retrospect he did the right thing. Look at Los Angeles’ Hidetaka Nishiyama. He wouldn’t accept anyone who didn’t do it his way and now look at him. I’ve changed and am trying to present the martial arts in a positive light,” Burleson says. “Even though I’ve seen it, I know a lot of my old head-knocking buddies haven’t. They are still where I was years ago.”

The martial arts community lost a great pioneer in the martial arts in the passing of Grandmaster Burleson. He passed away on October 31, 2021 at the age 85.

I love you Mr. Burleson. You have afforded me the biggest blessing of my life as you allowed me to be by your side in your last year’s. The very fact I was able to lay my head on your chest and hold you as you took your final breath before you entered heavens gates will impact me the rest of my life. I will now carry your torch for Christian Soldiers Karate, though my hands will not be a steady or firm as yours, I will honor you and the Lord just as you wished. I will finish what you started. Until I see you again my bright light! ~ Jamie Cashion

And, In This Corner, Jerry Piddington

Master Seiko Higa In My Memories

USAdojo - April 16, 1966
We use cookies to ensure that we give you the best experience on our website. If you continue to use this site we will assume that you are happy with it.OkRead more