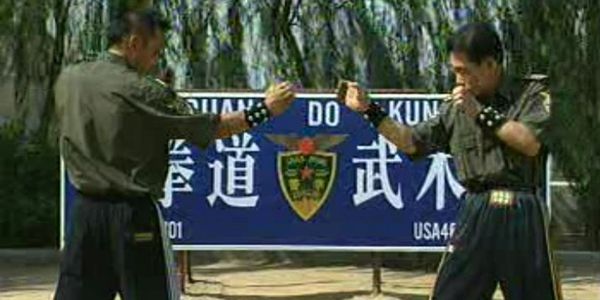 Quick throws, attacks and counterattacks, Chin Na (joint locks), kicking, fist and palm strikes and more . . . Jing Quan Dao “Combat Tactics of Chinese Police” is the modern hardcore combat system of China. Jing Quan Tao literally means “way of the alert fist”, but Jing also means police. Since many law enforcement officers implement this method. Master Alexander Tao – a Guinness Book of World Records holder and master of the ancient fighting arts of Shaolin Temple Wudang Mountain and Liang Mountain developed this new martial art for actual street combat situations. It is a powerful kick boxing art developed as the result of dedicated research and training over a 20 year period. It includes a combination of techniques from many other powerful Kung Fu styles and practices.

The comprehensive scientific research on Jing Quan Dao involves the noted eight training systems, which develop both a trainee’s inner strong mind and outer toughness. Such five functional features have been proven in body sculpting, self-defense, kick boxing and in-ring competition, Kung Fu movie roles, on-stage exciting martial arts show, and Qi Kung treatment to disease. It is not only the graceful and swift body movement arts in martial arts, but also a powerful weapon in a trainer’s mind and body.

Jing Quan Dao has been shown in more than a dozen countries, and received a wide range of endorsements, has been commended in the Kung Fu circle, and has produced outstanding winners.

Jing Quan Dao is the rediscovery of diverse stunts from China with thousands of years of history, and it has contributed to the development of Kung Fu worldwide.

Jing Quan Dao’s training consists of four levels: entry, intermediate, advanced, and super, including module, schema, kickboxing, and Qi Kung. It has been formed into an explicit full vertical training course. The comprehensiveness and availability of this powerful Kung Fu can be effectively used in to train military or police special force.