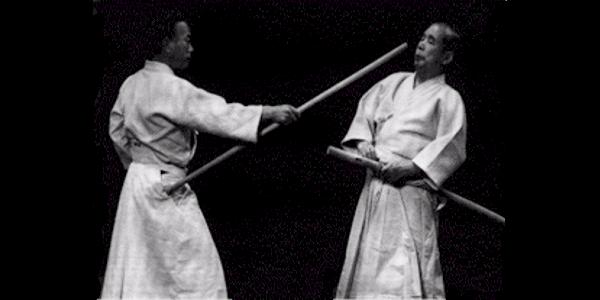 Shindo Muso Ryu, a school that devised the dynamic art of jo-jutsu was developed by Muso Gonosuke Katsuyoshi, a student of the Tenshin Shoden Katori Shinto-ryu.

Jodo, or the “Way of the stick” is the Japanese method of stick fighting using a jo against a swordsman. One can strike with the jo like a sword or sweep the jo like a naginata. The jo can be used to thrust like you would a spear (yari) and both ends of the jo can be used as a weapon, unlike the sword. Depending on the grip by which the jo is held, the fighting distance (ma-ai) is variable.

A series of twelve basic movements, (Kihon), using a short wooden staff (128cms) performed with agility and dexterity are the basis of Jodo. By combining these basic movements, the 64 techniques (against the sword) of Shindo Muso Ryu are taught usually in a progressive order. Because no protection is worn, a certain amount of courage is needed if one is not to fear the blows.

The more advanced students also study kata (a series of techniques) from related schools of traditional weapons such as:

About the Video
The Art of the Jo Jodo – “The Way of the Stick” is a traditional Japanese fighting art which uses a 4 ft. staff against a wooden training sword, known as a bokken, in a series of pre-arranged forms known as kata. The jo gained fame in the year 1605 when it was used in a duel, against the most famous swordsman in Japan, Musashi Miyamoto by the founder of Shindo Muso Ryu, Muso Gonnosuke. Musashi suffered his only defeat (in more than 60 contests, often ending in death) as Muso wielded his new weapon, the jo against Musashi’s famous “two sword” style. Over 400 years later, the jo is still being put to practical use today by the Tokyo Riot Police. The police use Shindo Muso Ryu as their training method for the jo. Training with weapons will develop your intensity, power, focus and awareness in ways that empty hand training cannot do. In this seminar/workshop you will learn some of the basic strikes, training drills and kata of jodo. In his seminars, Michael Belzer introduces the traditional customs, precepts and etiquette of a famous koryu – “old flow” fighting art of Shindo Muso Ryu Jojutsu.