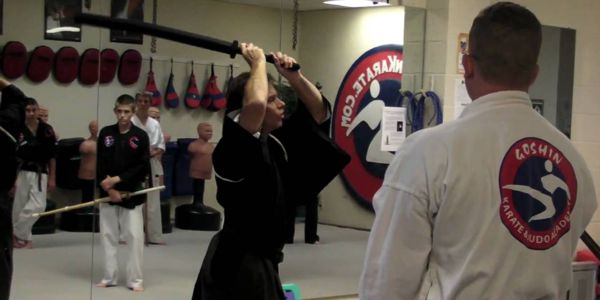 Japanese martial artists and sword masters came together in 1969 and modernized the “art of practice.” Founder Tanabe Tetsundo and his following, comprising some of the most influential swordsmen in Japan, called this new way of thought goshindo – also colloquially known as chanbara. The word “goshindo” translates to, “the way of self-preservation.”

From the beginning of time, man has used tools and weaponry. Originally created from wood and stone, these evolved into metal in the Bronze Age, when man experienced great advancements in bladed weaponry – especially the mighty sword.

Ancient man was always on the lookout for danger. The innate desire for self-preservation gave him this inborn vigilance and this is still in our blood today.

The sword long represented power and wealth and was one of man’s most prized possessions. Design and technique were created for the practicalities of war and defense. The only other usages were for ceremonies, social and cultural events or traditions.

Japanese warlords trained their armies with various metal and wood practice weapons. This proved dangerous; one wrong move, one poorly executed technique and injury or death could result.

Each warlord developed his own fighting techniques, which were tested on the battlefield. Some techniques were retained while others were discarded, depending on how effective they proved in battle.

After centuries of civil unrest and war, Japan united into a single government. The warrior no longer fought wars but the samurai spirit remained. Toward the end of the Edo period (circa 1875) one of the larger sword schools developed a new combative sport, called kendo. This evolved into a national sport that employed protective gear. Now one could practice without fear of great bodily harm.

Kendo utilizes a sword made from strips of bamboo. This old-fashioned practice sword combined with protective head and body gear made for a safer way to practice.

Then Tanabe Tetsundo and his group founded goshindo, also called chanbara. These traditional swordsmen, aware that times were changing, began to educate the public in the way of the modern samurai while utilizing traditional ways and techniques.

Swords made out of flexible plastics (called a ‘choken’) proved a stroke of genius, because wearing a light head mask for face and eye protection was all that was required for safety.

This innovation made such a difference that the Japanese public wholeheartedly embraced this new combative sport. It is a part of the Japanese Department of Education and Recreation. Today, chanbara is the fastest-growing combative sport in the United States, boasting 200,000 combatants worldwide.

Sensei Ryan Speaks Out About Homework