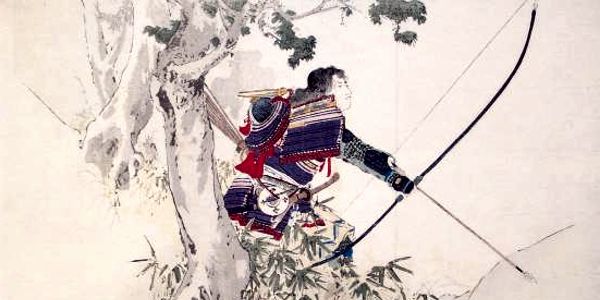 Kyudo, which literally means The Way of the Bow, is considered by many to be the purest of all the martial ways. In the past the Japanese bow was used for hunting, war, court ceremonies, games, and contests of skill. The old word for Japanese archery was kyujutsu (bow technique) which encompassed the skills and techniques of the warrior archer. Some of the ancient schools, known as ryu, survive today, along with the  ancient ceremonies and games, but the days where the Japanese bow was used as a weapon are long past. Modern kyudo is practiced primarily as a method of physical, moral, and spiritual development.

No one knows exactly when the term kyudo came into being but it was not until the late nineteenth century when practice centered almost exclusively around individual practice that the term gained general acceptance. The essence of modern kyudo is said to be synonymous with the pursuit of truth, goodness, and beauty.

Truth in kyudo is manifested in shooting that is pure and right-minded, where the three elements of attitude, movement, and technique unite in a state of perfect harmony. A true shot in kyudo is not just one that hits the center of the target, but one where the arrow can be said to exist in the target before its release.

Goodness encompasses such qualities as courtesy, compassion, morality, and non-aggression. In kyudo, goodness is shown by displaying proper attitude and behavior in all situations. A good kyudo archer is a person who maintains his or her composure and grace even in times of great stress or conflict.

Beauty both enhances life and stimulates the spirit. In kyudo, truth and goodness, themselves, are considered beautiful. Beauty can also be found in the exquisite grace and artistry of the Japanese bow and the elegance of the traditional archer’s attire. It is also present in the refined etiquette that surrounds the kyudo ceremony. Etiquette, which is simply common courtesy and respect for others, is an essential element of kyudo  practice.

Much has been written about the philosophical connections of kyudo. Perhaps most known is the book Zen in the Art of Archery by Eugen Herrigel. In his book Mr. Herrigel sets forth his experiences with kyudo in the 1930’s. It was a beautifully written account that has been translated into many languages, giving people worldwide their first glimpse of the art. Unfortunately, the book was very one-sided in its description of kyudo as a Zen art and is responsible for a lot of the current misconception that kyudo is a religious activity.

While kyudo is not a religion it has been influenced by two schools of Eastern philosophy: The previously mentioned Zen, a form of Buddhism imported from China, and Shintoism, the indigenous faith of Japan. Of the two, the influence of Shintoism is much older. Ritualistic use of the bow and arrows have been a part of Shintoism for over two thousand years. Much of the kyudo ceremony, the attire worn by the archers, and the ritual respect shown for the equipment and shooting place are derived from ancient Shinto practice.

The influence of Zen, on the other hand, is more recent, dating back to the Kamakura Period (1185-1333) when the warrior archers adopted Zen as their preferred method of moral training. Zen’s influence on kyudo  became even greater in the seventeenth and eighteenth centuries when Japan, as a whole, experienced a period of civil peace. During that time the practice of kyudo took on a definite philosophical leaning. This is  the period when sayings like “one shot, one life” and “shooting should be like flowing water” were associated with the teaching of kyudo. Because of its long and varied past, modern Japanese archery will exhibit a wide variety of influences. Today, at any given kyudojo (practice hall), one can find people practicing ancient kyujutsu, ceremonial court games, rituals with religious connections, and contests of skill. The key to understanding kyudo is to keep an open mind and realize that any style of kyudo you see or practice is but a small part of a greater whole, and that each style has its own history and philosophical underpinnings which make them all equally interesting and important.

Blade Magazine: All About Knives