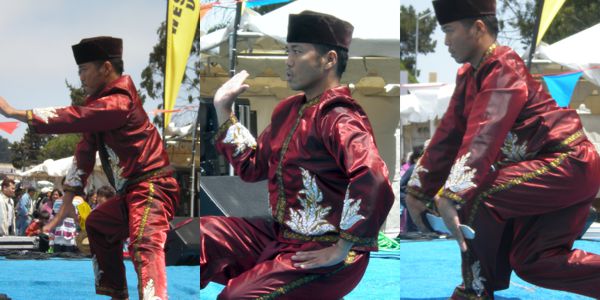 The Philippines, as with any Asian country, has had a long, hard history with certain aspects of its culture and values similar to other countries such as Japan and China. Being an archipelago of over 7,000 islands, it has seen an influx of many different people. Sri Vishaya was the first empire and was eventually dominated by the Mahjapahit Empire that brought in the Muslim faith. Many people from other countries made the Philippines their home bringing with them many new fighting styles, contributing to the culture and martial way of fighting with both steel and rattan weapons {kali}, and hand and foot fighting {Kuntaw}.

No one can be sure exactly how Kuntaw and Kali originated, but it has proven to be an effective fighting art. Weapons were predominantly in the kali way with many different swords, spears, and knives in use. Practitioners not having access to bladed weapons used hard wood or more commonly rattan, a native vine growing wild in the jungles and hard when dried, whereas in kuntaw only hands and feet are used.

Then in 1521, the appearance of Magellan changed the course of history from the Philippines. The most significant result of Magellan’s stopover was the conversion to Christianity of some Filipino villagers and that he died at the hands of Lapu – Lapu and his men. This historic event was recorded by Pigafeta, a Spanish historian and chronicler of Magellan’s voyage around the world. From Pigafeta’s description of the native warriors and their fighting style, some techniques incorporated into Kuntaw were already in use at that period in the Philippine history.

In time, the Spanish came in force and eventually conquered the Philippines. The principal law put down by the Spaniards was the total ban on carrying weapons and the practice of martial arts.

The practice of Kuntaw was kept alive primarily in the southern Philippines until finally, following the ban and turmoil of the Spanish occupation, a man called Yuyong Henyo left Mindanao and moved to Luzon, the largest island in the north. Yuyo’s last name Lanyada was changed to Lanada per Spanish decree of having a Spanish surname. This decree was called the Decree of Cognomen (1849). That decree included the governador cillos (governor general) order that any Katutubo (native Filipino) caught involved or training in Kuntaw/ Kali would be punished by law.

Kun Tao refers to the Chinese martial arts as practiced in Indonesia. The term means “Fist Way” just as “Kempo” or “Kune Do” do. Students of the Chinese martial arts will find much familiar in Kun Tao. Many well-known styles such as Taiji, Shantung Black Tiger, and Fukien regional boxing are practiced in Indonesia. The expression can be different, though. Different physical conditions and contact with other fighting traditions have led to some divergence from the arts as they are currently practiced in China. Due to the unfortunate history of the Malays and ethnic Chinese in Indonesia Kun Tao is not performed as openly or by as many as the various styles of Pentjak Silat. It is studied mostly by those of Chinese extraction. One of the best known teachers of Kun Tao in North America is Sifu Willem de Thouars.