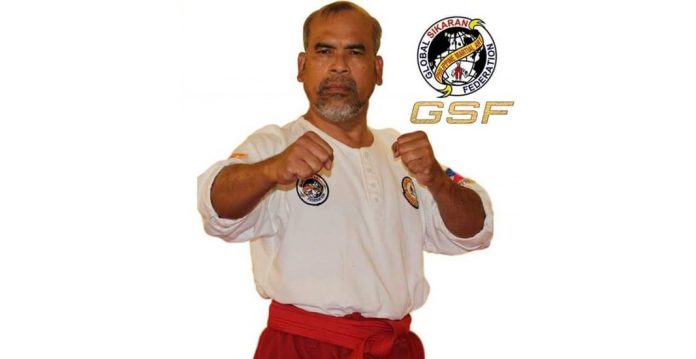 Sikaran is a contact sport, game, contest or tournament that uses both hands and feet to parry an attack by an opponent, normally a strategic kick. Sikad is a Filipino root word for kick, thus kicking used as an active verb translates to Sikaran. Even before the Spanish Conquest of the Philippine Archipelago on March 16, 1521 when Ferdinand Magellan discovered the Islands, this ancient sport was popular among the farmers in the village of Tanay in the province of Rizal, east of Metropolitan Manila in the Philippines. This sports uses both feet to gain points while the hands and arms are employed to parry the incoming foot blows.

Sikaran is an ancient game played by rice farmers. The game was developed from their daily farming activities and it was used to give them ease from their backbreaking work in the rice paddies. Youth farmers and farmhands were the first to play the game by kicking mud on the faces of their playmates with great exuberance, eliciting laughter whenever the dirt landed on the target. This game attracted an audience when other farmers watch from a distance.

Farmers from the Village of Baras, Rizal initiated the first foot and mud games of Sikaran until the nearby Villages of Lagundi and Morong adoptedthe game and called it “Paninggara” which literally means “Parrying” in their vernacular dialect.

The game was usually played during the land preparation stage of rice farming when farmers would irrigate the barren farm to soften the soil and prepare the area for plowing, harrowing and eventually planting the rice. Rice paddies are submerged in ankle-deep water for easy grubbing and plowing using farm animals such as Carabao (water buffalo), cows and horses which would draw the crude farming implements. Before rice-transplanting, the wide muddy areas served as the arenas for playing and the game always attracted youthful farmers who enjoyed engaging in mud kicking. Early stories explained that God-fearing people did not want to hurt others so mud-kicking was limited to hitting the clean clothing of their fellow farmers and body contact that could hurt was avoided. The player with the muddiest clothing was the loser of the game. No real rules or scoring system was agreed upon until players developed ways to kick large chunks of mud that would knock down the opponent.

As Sikaran evolved into a popular farm game, more rules were mutually agreed upon by those who played the game. Initially, a player who was felled by a big chunk of mud would lose, but it was soon agreed upon that the player who fell three times would lose the game, thus an early scoring system was already recognized by the players.

As the game gained popularity among the farmers, their kicking style evolved by using variations. These kicks were derived from watching the farm animals the farmers used every day. By day to day observation, the farmers had learned that the frontal Carabao Kick was very strong and then the “Sikad-Kalabaw” or sidewards kick came into use.

The Carabao Kick (Tadyak Kalabaw) was already a popular kick when farmers observed that the cow could kick sidewards. This unique kicking characteristic of the cow was carefully studied and included in the existing variety of styles of mud kicking. Soon after, they discovered the powerful horsekick which was delivered backwards.

In those days the soles of the farmers feet were callous and wide as they wore no shoes and would step barefooted over barren soils and grassy and muddy surfaces. A bigger and wider foot, therefore, would give a Sikaran player the edge over an opponent who had smaller, narrower feet.

Interestingly, the three-point system in Sikaran was adopted from the popular Spider Quarrel where two spiders of the same size would be pitted against each other on a broomstick (rib of the Coconut leaf). The spider that fell from the stick three times would lose.

The front stance of the players using the Carabao Kick remained the most popular stance until the players began to turn sideways to avoid being hit by the chunks of mud while delivering a sideward or backward kick and at the same time parrying to counter. The forward and backward format of the game has since adopted the sideward technique.

The first tournament was called “Patas na Labanan” (Fair Game) where two players played against one another with techniques limited to front and sideward kicks. They have since improved and developed a variety of turns and began using the horse-like backward kick. During the early discovery of the game, players would only engage in frontal mud-kicking, they have since learned to turn sideways and could deliver the backward mud kick without necessarily turning full front. Players have also learned to employ several techniques to distract the attention of their opponent so that they could freely attack.

The quick spider frontal attack, the Carabao kick, the cow sideward kicks and the horse backward kicks all became major elements of Sikaran. Accidents happened such a back kick delivered directly to the stomach of a player and sometimes those “accidental” techniques amazed the crowd and made the game more interesting. Over time more variations of the game developed and the game gained even more popularity province-wide. Eventually the game became a major attraction during big gatherings and celebrations of feast days. Sikaran players often trained using a native dance called Tinikling which requires dancers to dance between two bamboo poles being clicked together. Dancers had to be fast on their feet to avoid getting caught between the sticks and this dance helped Sikaran Players to become lighter on their feet.

The farmers who played Sikaran continued to develop the game by going into the fields early in the morning to kick mud, working on using various techniques. They continued to research and observe the movements of their farm animals and became more adept at preparing their body’s for the game. Plowing the paddies and following the animal-drawn implements were good foot and leg exercises they trudged through the knee-deep mud. They changed their diets, eating more vegetables and fruits to gain stronger bodies and maintain better health.

The primary industry of the inhabitants of Baras Rizal aside from paddy rice farming and upland farming, (slash and burn farming in the mountains called “Kaingin”), is fishing along the Laguna De Bay, a large body of fresh water rich in marine resources. Baras Village is bounded by Barrio Lagundi. This adjacent village has since adopted Sikaran as their farm game and would often compete with Baras players and meet to play the game at the boundary in the villages of Pulo, Patadyang, Suro-Suro, Ulahan, Basud and Kalang Batong Malalim all large farming villages with large rice farming paddies. Women have since taken an interest in the game and have began competitive games of their own. Men’s games have become more aggressive since women have began competitive Sikaran.

Over the next decades, the “Patas na Labanan” (Fair Game) continued to developed more innovations. The age, sex, body size (height and weight) was considered as factors in tournaments. The rules would include accumulation of body points and they would stop using the three fall rule or the Spider Quarrel three-fall rule because players have become very quick at parry blows and dodging incoming attacks. Eventually players changed the rules of the game and adopted a new point system.

Another variation is called “Labo-Labo Matira Matibay na Labanan” (Mix Up) and it has the toughest rules. This version is played by three to eight men inside a circle and limited space makes it difficult to kick. Individuals forced out of the circle lose and the toughest individual left in the circle is the Champion.

Since the four commonly used kicks of Sikaran can’t be executed efficiently without ample space, the Mix Up variation of Sikaran inspired players to develop a new technique for delivering a kick inside the limited space of the circle. This new kick was developed based on the limited space allowed when harvesting Palay which is rice grown partially underwater making it difficult for farmers to scythe the trunks of the palay. The technique used to harvest palay separates the palay trunks and harvests them by cutting a grip of trunks upward. The harvesting technique was studied and was proven to be very deadly in delivering a new kick. The foot is pointed downward and and the body is bent while they kicked upward usually hitting the upper torso or head of the opponent. The Biyakid Kick was then introduced to Sikaran Competition

Today, Sikaran is fast gaining popularity worldwide. It was recognized as a Filipino Contact Sports by the Department of Education, Culture and Sports and has been taught and played in various countries in Asia, Middle East, and Europe. Its main headquarters is in the United States.

Its current Federation Officials are now working to have it recognized by the Philippine Sports Commission and Philippine Olympic Committee in line with their continuing grassroots development program.