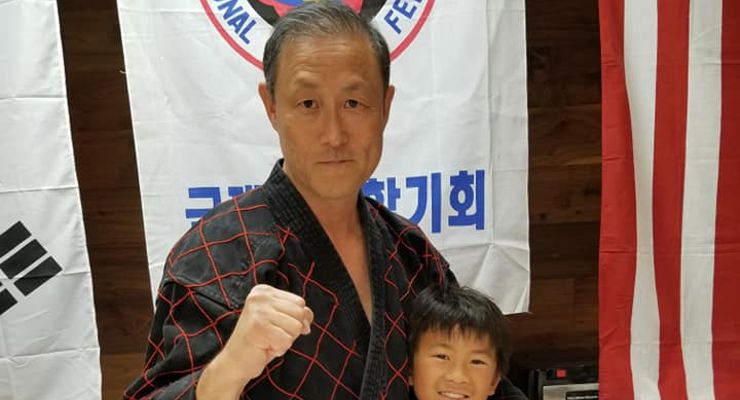 Jino Kang, is the son of Hapkido Grandmaster Myung S. Kang, and grew up in South Korea during the 1960’s, a time when the influence of the Western world was just beginning to emerge Grandmaster Myung S. Kang trained under the founder of International Hapkido Federation, Jae Nam Myong. At the age of 4, Jino often found himself waking up on the mat, with his gi on, already dressed by his father. Jino would jump in the class with the Black Belts, and his father, before everyone went to work. Around this time, the founder, Jae Nam Myong and Myung S. Kang incorporated Aikido (soft and circular) into Hapkido (hard and linear) combining the best of each system into one.

The Kang family immigrated to San Francisco, California in 1971, immersing Jino in a new language and culture. Jino was taught Hapkido in the garage, personally by his father, until Jino was old enough to receive a black belt. While Jino adapted quickly to his new environment, he followed the traditions of his father. He opened his first Korean Martial Arts school in the 1980’s. Today, Jino holds a seventh degree black belt in Hapkido and continues to teach at his school Hapkido USA in San Francisco. Jino Kang was inducted in to Master’s Hall of Fame in 2009.

Jino’s quest for never-ending improvement didn’t stop at Hapkido, Jino sought out other arts as well. His second achievement was Kyokoshin-Kai Karate with Master Don Buck, and Jino received a Black Belt only after four months of training. Jino continued to seek improvement in himself, and got his Black Belt in Tae Kwon Do by training with Master Lee Lawler. After that, he tackled Brazilian Jiu-Jitsu for 15 years with Charles Gracie and received his Black Belt Professor Degree. Jino continues to train in BJJ until this day and has incorporated BJJ into Hapkido and calling it Hapki-Jitsu. Jino’s new challenge is now Judo and Eskrima/Kali.