Home Who's Who Kanbun Uechi: Uechi-ryu 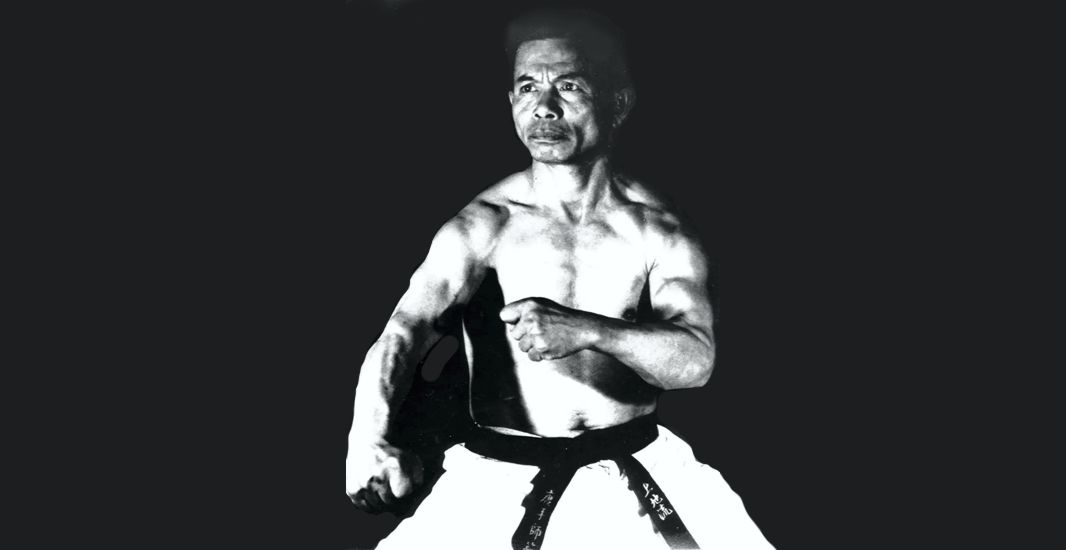 Kanbun Uechi was born in Deikusaku section of Okinawa, but grew up in the Takintō section of the mountain farming village of Izumi on the Motobu Peninsula of Okinawa. Kanbun Uechi’s family were farmers producing daikon radishes. When Uechi was a youth he studied bojutsu and basic Chinese techniques with Motobu experts, some of whom had previously lived in China.

In 1897 when Kanbun Uechi was 19 years old, he fled to Fuzhou in Fukien Province, China to escape being forced into the Japanese military and to fulfill his dreams of studying martial arts with Chinese masters. Kanbun Uechi would later share with his students that he was that he was the only survivor of his small “dugout” row boat that he traveled in to get to China. He shared that he was rescued by a Chinese martial artist who would eventually introduced him to another Chinese martial artist. When he arrived in Fuzhou, Kanbun Uechi first lived in the Okinawan boarding house Ryukyu Jyuentaku Hall. He initially took up the study of Kojo Ryū under two Okinawan men named Kugusuku and Matsuda, but Matsuda mocked Uechi’s speech impediment, offending Uechi and he sought training elsewhere.

Kanbun Uechi would next take up the study of herbalism and a Kung Fu system he identified as “Pangai-noon” (or Pangainun), under a Chinese master of Tiger and Crane styles of southern Kung Fu named Zhou Zihe (Called “Shushiwa” in Japanese and “Shushabu” by Kanbun). A great deal of unsourced apocryphal stories exist on how Kanbun met and came to train with Zhou Zihe, and more recent research in the region with assistance of the Fuzhou Wushu Association does not provide a detailed answer. However, the Wushu Association accepts that Zhou Zihe taught foreign students and Kanbun trained with him for 13 years, mastered the three kata Sanchin, Seisan, and Sanseirui, as well as learned kote kitae, or “forearm tempering.” Review of current Uechi-Ryū practice with several styles in Fuzhou linked to Zhou Zihe, which all developed on their own subsequently, led the Wushu Association to suggest that Kanbun made his own modifications to make what he would call “Pangai-noon”.

After about ten years of training, Kanbun Uechi received a certificate of mastery and in 1906 he opened his own dojo in Nanjing, and he continued periodic training under Zhou Zihe the next three years for a total of 13 years. After the three years, Kanbun Uechi returned to Okinawa, determined never to teach again because reportedly one of his Chinese students had killed a neighbor with an open-hand technique in a dispute over land irrigation.

Uechi returned to Naha, Okinawa in 1909, and he refused to teach martial arts while in Okinawa. He soon married, and his first son, Kanei Uechi was born in 1911. In 1912, a tea merchant and White Crane Kung Fu master Go Kenki (Wú Xiánguì) who knew him settled in Okinawa. As word spread from Go Kenki that Kanbun Uechi was a skilled martial arts teacher, he received requests to teach but refused.

In 1924 the economic situation in Okinawa was very bad and, at the age of 47, Kanbun Uechi left for Wakayama City, Wakayama Prefecture, Japan to find employment. While he was working as a security guard for a local Showa Spinning cotton spinning mill, he was persuaded by a co-worker, Ryuyu Tomoyose, to teach him martial arts privately after having been first convinced to show him ways of defending himself against different attacks. In 1926, after two years of private lessons, Ryuyu Tomoyose gathered together other interested potential students for a total of 30 men who all agreed to pay 5 yen each month. Since his month salary was only 15 yen each month, Kanbun Uechi agreed to resume teaching. Until 1932, he taught in small rooms in the company dormitory before work, during lunchtime, and after work. He then opened a general store and the “Pangai-noon Karate Academy” open to the general public in Tebira, Wakayama Prefecture.

In 1934, Kanbun Uechi met Kenwa Mabuni, the founder of Shito-ryu, who interviewed Kanbun Uechi in an article The Story of Chinese Kenpo he published in the 1934 edition of Karate Research. Mabuni suggested that Kanbun change the name of his style to “Uechi-Ryu or “style of Uechi.” The style he taught was renamed in 1940 to “Uechi-Ryu” Karate in Mabuni’s honor, and is one of the four major styles of Okinawan Karate.

Kanbun Uechi continued to teach in Wakayama until 1946. In November of that year, Kanbun Uechi turned over his school to Ryuyu Tomoyose and returned to Okinawa and settled on the island of Iejima. Students which included Ryuyu Tomoyose’s son, Ryuko, built a dojo named the Uechi-Ryu Karate Academy. Kanbun Uechi passed away from kidney disease in 1948.

After Kanbun Uechi’s death, his style was systematized by his son, Kanei Uechi, which included the addition of a number of “bridging” kata between the three Kanbun Uechi brought back from Fuzhou.

Uechi-Ryu has students and dojos all around the world, and it is particularly popular in the Northeastern United States.

Kanei Uechi sent a letter to all practitioners of karate throughout the world in 1982 emploring all karate students to respect each other without regard to nationality, religion, or gender. He envisioned Uechi-Ryu as humanitarian art in the service of peace, rather than war. Like Gichin Funakoshi, he thought of karate as a vehicle for enlightenment and peace.

USAdojo - August 23, 1999
We use cookies to ensure that we give you the best experience on our website. If you continue to use this site we will assume that you are happy with it.OkRead more