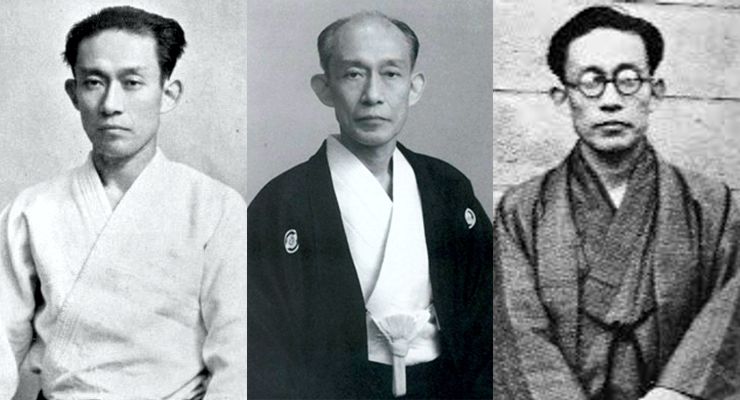 Kisshomaru Ueshiba was born on June 27, 1921 in Ayabe, Kyoto Prefecture, Japan. He  was a prominent Japanese master of aikido. He was the son of Morihei Ueshiba, Founder of aikido, and he became the international leader of aikido after his father’s death.

In 1942 he was still studying at Waseda University when his father decided he would retire to Iwama and appointed Kisshomaru Ueshiba the head of the Kobukan Dojo in Shinjuku, Tokyo. Ueshiba saved the dojo from fire bombing several times during the World War II. Kisshomaru Ueshiba graduated with a degree in economics in 1946.

When he spoke about the period just after World War II, Moriteru Ueshiba, grandson of Morihei Ueshiba said, “there was not yet much activity at the Hombu Dojo. For a time my father [Kisshomaru Ueshiba] was actually in Iwama instead … starting around 1949, he worked for about seven years at a company called Osaka Shoji. He had no other choice. Even if you have a dojo, you can’t make a living if nobody is coming to train, which was largely the case after the war. So, he took a job as an ordinary company employee during the day and taught only in the mornings and evenings.”

Beginning in 1948, he oversaw the development of the Aikikai Honbu organization and would also oversee the eventually the tearing down of the Kobukan Dojo in 1967 to construct the Aikikai headquarters.

Kisshomaru Ueshiba died around 5:30 PM on January 4, 1999, in a Tokyo hospital from respiratory failure. He was 77 years old.

As Kisshomaru Ueshiba father was the first Doshu, he was the second Doshu, and after his death, his son Moriteru Ueshiba became the third Doshu, following the iemoto system.

A Life in Aikido: The Biography of Founder Morihei Ueshiba (2008)

The Art of Aikido: Principles and Essential Techniques (2004)

The Spirit of Aikido (1987), Kodansha International

Keith Vitali - March 9, 2017
We use cookies to ensure that we give you the best experience on our website. If you continue to use this site we will assume that you are happy with it.OkRead more