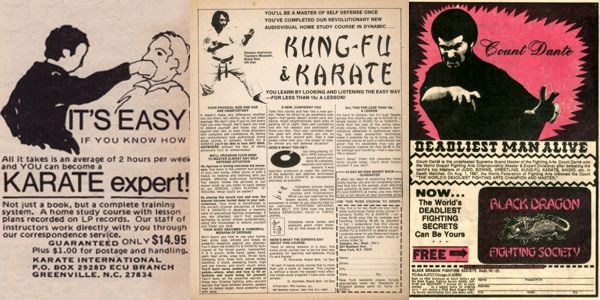 Flip open any martial-arts trade magazine, and you’ll find page upon page of ads for merchants selling instructional books and videos. Learn the ancient techniques of the Taoist sages! Let the grand champion Invincible Warrior™ personally show you how you too can be an indestructible force of nature! Just buy this book or video!

U.S. history alone is filled with stories of people who are self-educated men. No less a personage than Abraham Lincoln became a top-notch trial attorney simply by reading on his own. But is it possible to teach yourself a martial art through a book or a video?

Like those silly ab machine infomercials, the promise of a complete martial art for less than $100 (plus shipping and handling) is a marketing ploy designed to play upon our fantasies of learning something worthwhile. This fantasy can be especially tempting to those of us who don’t live in or near a major metropolitan area and thus have few, if any, choices for martial arts instruction. In New York City or San Francisco or Los Angeles or Chicago, one has many style options and choices for martial arts teachers, and the odds are that you can find and actually train with several that are quite good and even world-class. But if you live in a sleepy farming community in Nebraska (for example), consider yourself lucky to find a single Tae Kwon Do school run by a guy who’s had maybe three years of actual instruction – tops. It’s certainly easier to believe that you can get the good instruction you want by sending away for some instructional materials than to believe that you have no real option if you want to learn something good by actually packing up your entire life and moving.

But that’s a fantasy. The sad fact is that books and videos are no substitute for actual instruction – and if you read the fine print in the books and videos, they’ll tell you the same thing. Training with a real instructor confers advantages that no video or book, no matter how well-produced, can match.

Now, a lot of people figure they can get around this by recruiting a training partner who learns and practices off the book/video at the same time. It’s an admirable effort, but here’s the thing: a technique feels different each time you apply it on a different person. Doing a triangle choke on a tall guy with long wiry limbs presents different problems and opportunities than it does on a short, stocky muscular guy; same for a sweep or a parry. The only way to get a good feel on a technique is the practice it on as many different training partners as you possibly can.

As it turns out, one of the best places to find a large number of different training partners is – an actual school.

In addition to these three advantages, a school offers a convivial social atmosphere and sense of comradeship that is not only nice, but can serve as a motivator: there have been days in which I made sure I trained because I didn’t want to fall behind relative to my peers. On other days, I went into class not because I was in the mood to train, but to hang out with my classmates. Either way, it definitely helped keep me disciplined.

Does all this mean that I think books and videos are useless in your martial arts education? Absolutely not. These materials can add a valuable component to your training.

But I digress. Viewing videos or reading books by other masters of your style can thus give you a different perspective on a given technique and its uses, even if the underlying principles are the same. This can give you a fuller understanding of the principles themselves.

In an ideal world, everyone who wanted it would have access to a skilled teacher and receive live instruction. Unfortunately, this is often not possible, and many believe that books and DVDs can be an adequate substitute. They are not, and in fact can do more harm than good if they are used as a means of primary instruction. However, they can be useful in supplemental ways.

World of the MMA Warrior